For a minute, it seemed like the old days. Matt Birk stopped to take questions in the Vikings locker room on Wednesday, something the big redheaded center from St. Paul hasn’t done much midweek this season. The first question about Mike Tice, the former Vikings head coach and mad F-bomber who coaches tight ends for Jacksonville, brought this answer: “He’s dead to me.”

Birk was joking. He likes Tice. Still keeps in touch with him, he said. But Birk knows what’s been swirling around in the last week or so, and the last thing he needed was to be dragged into comparing Tice with Brad Childress — who, in case you’ve been preoccupied with the Senate recount, dropped below cholera on the popularity chart with Vikings fans this week.

“Let’s not go there,” Birk said. “That’s not the focus this week. Now, if you want to write a book in the off-season …”

If you listen to sports talk radio and read message boards, you’re finding more and more people who wish the Vikings had never fired Tice, whom the Wilfs clumsily canned minutes after the final game of the 2005 season.

That line of thinking percolated after Sunday’s 19-13 loss in Tampa Bay. Gus Frerotte threw for 138 yards, Adrian Peterson’s lone fourth-quarter touch came on a kickoff return, and Peterson argued with running backs coach Eric Bieniemy on the sidelines while Chester Taylor played the final series, a curious personnel decision that cemented Childress’s reputation among his harshest critics as a play-calling cement-head. 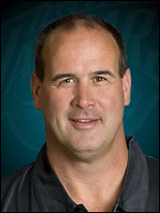 Now, some of those critics turn their lonely eyes to the days a certain nasally New Yorker prowled the Vikings sideline in a sleeveless sweater with a pencil behind his ear. The Childress era has been so painful that Tice’s time, when beating the Packers wasn’t an aberation, seems like Shangri-La.

In the words of another New Yorker, you can’t be serious.

Look: Personally, I liked Tice. We grew up about 10 miles apart on Long Island, though we never met until I moved here in 2002, his first full season succeeding Denny Green. But as my father used to say, I wouldn’t trust him as far as I could throw him — which, at Tice’s 6-foot-8 and 300-plus pounds, can’t be far.

Tice quintessentially is a character
No doubt Tice was — is — a character. Among coaches and managers I’ve covered in 28 years, only Bill Parcells had more media savvy than this guy. Tice knew who to work and how to work them.  He named the media center at Winter Park after Sid Hartman, sucking up to the Twin Cities’ most influential columnist. Beat writers had Tice’s cellphone number. He gave great quotes, often flavored with his favorite invective, a word he used interchangeably as a noun, verb or adjective. He even kept a dish of M&M’s on the desk in his office.

But Tice was not a good head coach. Not even close. He got the job in 2001 because owner Red McCombs was too cheap to hire an experienced guy, and Tice, a climber, pined for the job. He likened Tice to John Lucas, who also had no head coach experience when McCombs hired him for the San Antonio Spurs in 1992. Because McCombs wouldn’t pay for top-quality assistants, Tice’s first coaching staff included his brother John, his brother-in-law Jim Paganos, and his high school coach, George O’Leary, who needed a job after a résumé fiasco at Notre Dame.

A friend of Tice told me once that the coach’s biggest failing was his desire to be the smartest person in the room — a fatal flaw for a guy who isn’t that smart. Tice often tried to take credit for things he had nothing to do with. He acted like the players’ buddy — the day Tice called Randy Moss “Dog” when Moss called into Tice’s radio show stands out — but many didn’t trust him, according to a Vikings insider.

One day in 2002, when the offensive line was struggling, Tice walked over to a group of reporters at practice and bragged about the fundamental drills he used to make players run when he coached that position. Steve Loney, who succeeded Tice as line coach, was working with his guys nearby. Loney had to be seething at Tice’s implied public criticism. But Loney, always a good soldier, refused to rip Tice.

Also in 2002, against the Falcons, Tice looked clueless when a trick play he claimed he designed — a Moss option pass for a touchdown — was disallowed because of an illegal formation. Tice said he diagrammed the play for game officials beforehand, a common practice, and said they OK’d it. But Tice admitted he forgot to mention that tackle Bryant McKinnie, then a rookie, was an eligible receiver. No one told McKinnie to report in to the officials, hence the flag. The Vikings lost in overtime.

Selective memory at work for many who fondly recall Tice’s past
People who fondly recall the Tice era forget that even when Moss and Daunte Culpepper were still here, with coordinator Scott Linehan running the offense, fans complained about the play calling, the turnovers and stupid penalties. And people forget that in 2005, a website and a blog both demanded Tice’s firing.

Since Tice acted more like a regular guy than the stiff and jargon-y Childress, fans remember him warmly. And that’s fine.

But don’t be fooled into thinking things would be different if Tice had outlasted his ticket-scalping venture and the Love Boat scandal, or that things would change dramatically next year if the Wilfs improbably brought him back. There’s a reason why no NFL team hired Tice as an offensive coordinator, let alone a head coach. Those jobs are beyond his capabilities.

Memories can be tricky sometimes. We remember the joyful, the funny and the pleasing, while the bad things fade away.

It’s like meeting an old friend or co-worker for coffee. It’s been a few years, but you remember some good times, and wonder why the two of you lost touch. You’re still thinking that when you sit down. But after 20 minutes of listening to this person prattle on, the reasons come roaring back like a freight train, and the check can’t come fast enough.