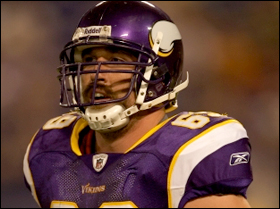 Amazing. Sixty minutes of football at the Metrodome without a single “Fire Childress” chant. Almost made me think I went to the wrong stadium.

It’s hard to justify booing the coach when you win, as the Vikings did on Sunday, even though the 28-21 victory over the Houston Texans wasn’t exactly a masterpiece. But feel free to do it the next time the Vikings drop defensive end Jared Allen into pass coverage.

Sunday, Allen demonstrated more of the disruptive skill that enticed the Vikings to acquire him from Kansas City. He had two of the Vikings five sacks, forcing a fumble on the first, and came breath-distance close on three others.

His one-armed throwdown of Houston backup quarterback Sage Rosenfels in the final two minutes wrecked the Texans’ last-ditch try to tie the game. Allen drove Texans rookie left tackle Duane Brown into the backfield, reached around with his left arm, grabbed Rosenfels’ shoulder pads and yanked him to the turf like a rag doll — no easy feat for a guy who finished the game with a banged-up right shoulder.  (Update: As a result of the injury, there’s a chance Allen may have to miss Sunday’s game against Green Bay, coach Brad Childress said today.)

“I probably could have had a couple like that today,” Allen said. “But I’ll take ’em wherever.”

You’ve got to go back to John Randle, or maybe even the Purple People Eaters, to find a Viking with this kind of ability. “Allen is one of the best players in this league,” Rosenfels said. “He’s worth every dime they pay him.”

That’s why I shook my head two weeks ago, watching Allen trying to tackle Marty Booker on a pass route in the Vikings’ 48-41 loss in Chicago. Allen backpedalled into coverage with a blitz on, and Booker left Allen flailing like a first-time ice skater on a 51-yard touchdown play.

Why Allen was back there in the first place may explain why the Vikings are only 4-4, and why fans clamor for Childress’s job, though this fiasco figured to be defensive coordinator Leslie Frazier’s call.

Allen is not being paid to run backward. He is not being paid to cover or tackle receivers in the open field. That’s what Ben Leber and Antoine Winfield do. He is paid to harass and sack quarterbacks, to draw the double-teams that enable Kevin Williams, Pat Williams and Ray Edwards to bust through their one-on-ones.

Too often, coaches outsmart themselves trying to be clever. And asking a premier pass rusher like Allen to drop back, to provide a “different look,” is the kind of I’m-smarter-than-you nonsense that gets coaches fired. It’s like asking Justin Morneau to bunt, or Al Jefferson to play point guard. Maybe they can do it, but why negate a guy’s strengths and let the other team off easy?

Plus, Allen’s single-mindedness is exactly what you want in a pass rusher. “I only pay attention to what’s happening on the front four,” Allen said. “I wouldn’t have known if we were in dime, nickel, prevent. As long as there are four guys in place, I know where I’m lining up.”

And, often, where he’s ending up. In his last two games, Allen has four sacks (giving him seven for the season) and two forced fumbles. He thought he had at least a share of a third sack on Sunday, which is why he broke out his unique calf-roping sack celebration three times.

Allen knocked the ball from starting quarterback Matt Schaub’s hand in the second quarter near midfield to thwart a Texans’ drive. Late in the game, with the Vikings protecting that seven-point lead, Allen’s beefy left hand yanked down Rosenfels on a third-and-two from the Texas 18. (Allen may not have had a choice. After the game, Allen sported a huge bag of ice on his right shoulder, and he later appeared on KSTP-TV with that arm in a sling. He claimed it was nothing serious, but we’ll see what Childress says about it today.)

On fourth down, Allen and Kevin Williams appeared to crumple Rosenfels, though only Williams received credit. That left Williams and Allen tied for the team lead with seven sacks each.

“When you get a two-touchdown lead or a two-possession lead, or even a one-possession lead towards the end of the game, they have to throw the ball,” Allen said. “They can’t keep eight guys in to block. They need guys out on the route. Whenever you can do that, then you can score points. Their offense becomes one-dimensional, and it takes away all the guesswork.”

No guessing here: Let the man do his job. “In a perfect world,” Childress said, “you get what you pay for.” As long as you know how to cash the check.