The graphic went up early in the telecast of Sunday’s game, not unlike the Vikings as they jumped in front of the Tampa Bay Buccaneers 10-3 barely 16 minutes into the NFC clash at Raymond James Stadium. With Minnesota’s Adrian Peterson off and scampering — 51 yards on his first six carries — it was as good a time as any to reflect on the star running back’s reach, and by how much it might exceed his grasp.

So there it was, the list of five backs in NFL history who have rushed for 2,000 yards or more in a single season. It’s an elite group, defined by one of the fat, round numbers in pro football that is as impressive and as accessible as any of Major League Baseball’s memorable milestones. It happened only once in the league’s first 40 seasons, when teams played 14 or fewer games each year, and just four more times since the schedule got bumped to 16 beginning in 1978. Even casual fans can give you three or four of the five names, but we won’t even make you guess:

The Big Five
• In 1973, O.J. Simpson went Roger Bannister on the record book, breaking a threshold that seemed as unassailable as the four-minute mark for milers. Simpson, in just 14 games, carried 332 times for the Buffalo Bills to finish with 2,003 yards, breaking Jim Brown’s 10-year-old record by 140 yards. On a snowy, frozen field at New York’s Shea Stadium, Simpson got Brown’s mark in the first quarter and, when he and his lineman realized early in the fourth that he was within 50 of 2,000, they went for it. “I may not look it,” Simpson said that day, “but I’m aggressive.”

• Eleven years later, Eric Dickerson of the Los Angeles Rams shattered Simpson’s record, needing one more game but still with one to spare. Through 15 games, Dickerson had 2,007, then cruised to 98 in his team’s finale. His total of 2,105 represented 74 percent of the Rams’ rushing yardage in 1984 and 42 percent of their total offense.

• None of the 2,000-yard rushers had more help in keeping defenses honest than Denver’s Terrell Davis in 1998. With quarterback John Elway a constant threat to beat teams over the top, Davis was able to punish them on the ground. Running from behind a line that started, as a unit, all 16 games, Davis had five games in which he failed to gain 100 yards but made up for it with performances of 208, 191 and 178 to goose his total. Injuries hobbled Davis after that, though, and he started only 16 more games over his final four NFL seasons. 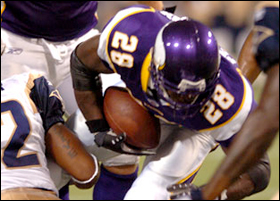 But Peterson already had that stat on his to-do list after an exciting but hampered rookie season. “I’d be cheating myself if I kind of set it lower,” Peterson said back in May, during a Vikings promotional appearance in Brainerd. “But 2,000 yards, that’s my goal. I’m just going to work hard to give myself an opportunity to reach that goal.”

In time, sure, why not? But this year? Not so much. Not anymore.

Just a week after his brilliance and resilience in the 28-27 victory over Green Bay at the Metrodome — 192 rushing yards, 225 total yards, a 29-yard run for the game-winning touchdown and real, demonstrative leadership in deeds and words — Peterson settled for 85 yards on 19 carries Sunday in what became a 19-13 defeat. After getting to halftime with 71 yards, the 23-year-old from Oklahoma went six-for-14-yards in the third quarter. Then came an oh-fer in the fourth, with the Vikings’ offense generating only seven plays.

Tampa Bay’s defense, orchestrated by coordinator (and former Vikings staffer) Monte Kiffin, has yielded 100 yards to a running back only once in 10 games this season. So it wasn’t introduced to Peterson Sunday — the teams hadn’t played since 2005 — so much as he was introduced to it. That included a fourth-and-1 play near midfield in the third quarter when Bucs’ linebacker Derrick Brooks got over in time to yank a pass away from Peterson before he corralled it and possibly broke for a big gain or points. By the end, Peterson was on the sideline, caught by the cameras generating more noise than heat in an exchange with running backs coach Eric Bienemy.

“I said this guy’s big, he’s fast, he’s quick, he can stop on a dime,” a giddy Kiffin told reporters afterward. “He can catch the football. Plus he loves football. He plays hard. If you hear anything bad about this guy, let me know, will you? … The first half, we didn’t play good enough. We did a good job adjusting, and our guys were into it. They knew they were going against a pretty darn good back, and they stepped up. The whole thing is, you’ve got to hustle the football. Tackle the guy with the ball before he gets to the end zone, right?! That’s the name of the game.”

At this point, Peterson and the Vikings’ offense would be better off deep-sixing 2,000 and concentrating on these hurdles: The Lions, in Sanders’ stellar season, finished a modest 9-7. The Bills in 1973, meanwhile, missed the playoffs entirely.