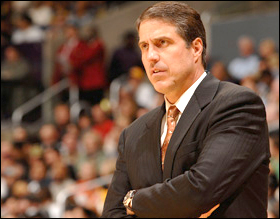 Some insights and observations while waiting for, then listening to, the Timberwolves’ announcement that Randy Wittman was out as head coach. Wittman was replaced by Kevin McHale, the team’s vice president of basketball operations who — in news bigger than the coaching change at this point — is out of that particular position, too:

• The biggest unknown after owner Glen Taylor and McHale participated in the Wolves news conference at Target Center this afternoon was: What was Plan B?

Parsing what was said by the principals, as they laid out the timeline of this decision, I still find it a mystery as to what Taylor’s back-up plan had been, had McHale not “agreed” to coach the team’s remaining 63 regular-season games.

We were told this much: That Taylor, rubbed particularly wrong by Minnesota’s back-to-back drubbings at New Jersey Friday and by the L.A. Clippers Saturday — by a combined score of 220-168 — had a few words with McHale before he left the arena that night and, in a subsequent phone call, asked McHale to take over as coach. That McHale, who filled that role and didn’t especially like it after firing Flip Saunders with 31 games left in the 2004-05 season, took his time pondering his boss’ request, finally emitting the puffs of white smoke after a stint at 6 o’clock Mass Sunday evening and then getting wife Lynn’s blessing.

Given the team’s 4-15 record with the roster that McHale assembled, though, it seemed once again in the stubbornly loyal Taylor-McHale relationship like one underperforming employee was getting cut a lot more slack than another (Wittman), facing but a fraction of the newly fired coach’s accountability.

Taylor avoids discussing other scenarios
So a logical post-Q&A session question was: What if McHale had declined to hitch up his pants, take over as coach and give up his VP duties? Would Taylor’s request have turned into an ultimatum — or perhaps, had it been put to McHale that way from the get-go?

“I don’t want to answer that question,” Taylor said. “I’m telling you what happened. I didn’t get into the second [option].”

Funny. The easy answers would have been no, and no. But Taylor didn’t grab that.

OK, well, had McHale turned down the request to coach, would Wittman still be the coach? Would McHale still be the VP?

• A certain segment of Wolves fans will be encouraged by Monday’s developments, seeing it as the removal of a head coach who clearly wasn’t getting results — Wittman was 38-105 since taking over for Dwane Casey in January 2007, worse even than the 62-102 record that got him fired after two seasons in Cleveland (1999-2001). Meanwhile, given Taylor’s track record of firing coaches, compared with vice presidents, this puts McHale — now ostensibly a “full-time coach” — closer than ever to being out.

Another segment will be happy that McHale no longer has his titular power as the team’s chief basketball executive and, therefore, diminished clout when it comes to drafting and making trades. Taylor said more than once that McHale now speaks with the “voice of the coach” on personnel moves, at the same level as Wittman, Casey and their predecessors. And considering how blindsided they felt at times by some of McHale’s maneuvers, that suggests a fairly diminished level.

But a third segment of Wolves fans will be discouraged that once again, McHale stays employed while a coach with less say-so in the organization is cut loose. With the club aground at 4-15, after four consecutive years (and surely a fifth) missing the playoffs, the ridiculously easy and justifiable thing would have been for Taylor to cut loose both the coach and the VP. This might be a half-step in that direction, but it doesn’t cheer up this particular faction of fans.

Some fans put the blame on Taylor himself
Nor does it cheer up a fourth segment: those who feel that Taylor himself is the problem, that he enjoys his prominence as owner just a little too much and that by maintaining a clubby group of basketball fellows with whom he is comfortable — in the locker room and out — he is selling the team’s quality short.

I think this franchise is at the point where an extreme makeover is in order, with the affable billionaire flipping the keys to a promising outsider as president of basketball operations — think Portland’s Kevin Pritchard or Houston’s Daryl Morey — and then taking one Mankato-size step backward to butt out.

• Sitting in that room before and during the news conference, I felt it hit home of how tired the act had gotten through the years. The Wolves’ reputation around the NBA is not good in terms of basketball, administration or business. In fact, back around the time Taylor and McHale started holding these dreary table talks in 1995, the VP was refreshingly candid because all of the mistakes had happened on someone else’s watch. He once referred to the Wolves as the league’s “laughingstock.” They weren’t far from that Monday.

• Poor Wittman. When he was in Cleveland, his best player (center Zydrunas Ilgauskas) was injured for 140 of the coach’s 164 games. In Minnesota, the best player in franchise history (Kevin Garnett) was traded out from under him after just 42 games. Wittman went to work with a succession of lottery rookies who wound up with bum knees in their second seasons (Rashad McCants, Randy Foye, Corey Brewer) and he saw another youngster (O.J. Mayo), like Brandon Roy in 2006, traded away before what could become a Rookie of the Year season.

Wittman was inconsistent in his rotations and pendulumed from calling out the players for assorted deficiencies to trying to atta-boy his way back into their good graces. Still, if Wittman was the overmatched cook, McHale was the guy who bought the groceries. Hadn’t he forgotten to pick up a few things at the market, such as a legit point guard and a workable center?

McHale made it clear that he liked the ingredients he provided, a good thing now that he’ll be the one coaching them. “We have to get ’em playing better,” he said. “But I like a lot of our players, I like the versatility. When we talked about the team, we talked about a multi-position team, a team that can get up and down the floor.”

• You know all of this — the losing, the empty seats at Target Center, the economy at large — was wearing on Taylor, because he strayed from his standard evaluation period by a whole game. When he and McHale cut loose Bill Blair in 1995 in their first coaching dismissal, the Wolves were 6-14. When they dumped Casey, the team was 20-20. Taylor likes to evaluate the season in 20-game bites but only got as far as 19 this time.

Maybe he didn’t want to be reminded Tuesday by Utah’s Jerry Sloan — who brings his Jazz team into Target Center — what hiring the right coach and sticking with him can mean. Sloan will celebrate the 20th anniversary of his hiring; he took over for Frank Layden on Dec. 9, 1988, before five current NBA clubs (including Minnesota) even existed. Since then, he has led Utah to a 1,007-604 mark, with two conference championships, seven division titles, 16 consecutive winning seasons and 18 playoff appearances.

Then there’s this: There have been 223 coaching changes since Sloan got his current job, with every other team making at least two. McHale counts three times on that list and Wittman four.