However this extraordinary season plays out for the Gustavus Adolphus women’s hockey team, which hasn’t lost since November and ranks No. 1 in the nation in Division III, they’ll always have one unifying story: The Day The Bus Caught Fire.

If that sounds like the title of a movie, the players are way ahead of you.

This summer, a persistent Freon leak in the refrigeration system at Lund Arena, the rink on the Gusties’ campus in St. Peter, forced the school to rip up and replace the flooring. That meant no ice for more than a month. So until early December, the women’s and men’s teams rode yellow school buses to Mankato or New Ulm for practices and games.

“It was kind of like being back in high school,” said senior co-captain Jenny Pusch of Minneapolis, who attended Holy Angels. 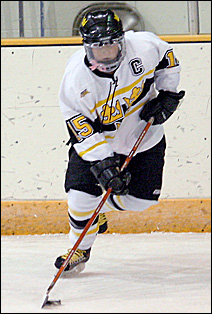 gustavus.edu
Jenny Pusch on the ice during the Feb. 20 game against Hamline.

On one of those Mankato trips, shortly after the bus turned south on State Road 169, several players in the back smelled something odd. Not that stale, musty odor of sweaty hockey gear — if you’ve played or had kids who played, you know exactly what I’m talking about — but something “like burning rubber,” as senior forward Jessica Doig put it. Pusch thought she smelled exhaust fumes. It was so foul that players crammed into the front of the bus, usually the domain of the coaches and the team’s 11 freshmen.

‘A crazy day’
At the rink, Coach Mike Carroll disembarked first, then yelled for everyone to hustle off. When Doig got out, she said she saw flames shooting out from underneath the back of the bus.

“It was kind of a crazy day for us,” said Doig, of New Prague. “It was like, Oh my God, we could have gotten blown up on the bus.”

Being hockey players, once they realized everyone was safe, they used the frightening moment as a jumping-off point for gallows humor. Someone said, “Think of the Disney movie they could make about us if we were all blown up,” or something like that, and the conversation progressed to which actors would play the players and the coaches. The consensus choices, according to Doig: Jennifer Lopez as her (“That’s what some people say I look like,” she explained), Kevin Bacon as Carroll, Angelina Jolie as assistant coach Andrea Peterson, and Nicole Kidman as the fair-skinned Pusch.

“I don’t know how I remember all of this,” Doig said.

Carroll thinks all the bus-riding time helped the team jell faster than usual. Even before the rink hassles, Carroll scheduled the Gusties’ first game a week later that the NCAA allows to give the freshmen more practices to acclimate. Gustavus lost its opener at Adrian (Mich.) College, 2-1 in overtime on Nov. 7, the day after a 14-hour bus trip. The Gusties beat Adrian the next day, 3-0, and haven’t lost since.

At 20-1-4, the Gusties take the longest unbeaten streak in the country into Saturday’s Minnesota Intercollegiate Athletic Conference semifinal game against St. Olaf at Lund Arena. The conference winner earns an automatic NCAA Tournament berth. The Gusties, who haven’t lost a conference game in more than two years, are gunning for their sixth consecutive MIAC tournament title and seventh NCAA berth in nine years.

With the Gusties, strong goaltending by freshmen Emily Klatt and Danielle Justice made the biggest difference. The two lowest goals-against averages in the country belong to Klatt (0.69) and Justice (0.81); no one else is below 1.00. Justice keyed Alexandria’s state 1A title run last year by stopping 97 of 101 shots over three tournament games.

Klatt, who is 11-0, was an honorable mention all-state pick from Woodbury.

The Gusties had to rely on goaltending and defense after graduating three of their top four scorers from last year. Doig (13 goals) and freshman Allie Schwab of Stillwater (11) are the only players with more than seven goals. But the Gusties, who led the country in scoring defense last year, are No. 1 again with an even smaller average, 0.76 goals per game.

“If we do make a mistake,” Carroll said, “we’ve got someone back there who can make a save.”

Said Pusch, one of the team’s four seniors: “I’m not going to lie — we all were nervous at the beginning of the year, because goaltending was something that was always on the rocks for us. We had two freshmen, and we were like, oh gosh. It turns out they’re some of the most poised goalies I’ve ever played with.”

Demanding schedule
They needed it because, as usual, Carroll drew up a demanding non-conference schedule. The Gusties faced five teams in this week’s poll — Adrian, Amherst, Wisconsin-River Falls, Wisconsin-Stevens Point, plus MIAC rival St. Thomas — and went 4-1-3 against them. The Gusties were 16-0-1 against everybody else, tying Bethel.

The ties annoy Carroll, who hopes to push his team farther than last season, which ended with a NCAA first-round loss to Wisconsin-Superior. Under Carroll, the Gusties’ finished third in the NCAA in 2004-05 and fourth in 2005-06, the latter when Doig and Pusch were freshman.

A long postseason might make for a more memorable story than a bus fire. And one last thing about that: In the conversation about actors and actresses, Pusch floated a different choice to play her.

“I think I wanted Reese Witherspoon,” she said, “but she’s about half the size of me.”