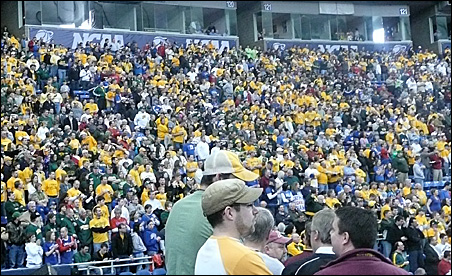 MinnPost photo by Jay Weiner
The Metrodome today was speckled with gold and green … Bison Central, to be sure, as fans cheered on North Dakota State University in its losing effort to powerhouse Kansas in the NCAA Tournament.

Parties so often end with a whimper rather than a bang, a slow, trickling away of the festive atmosphere until it becomes flat, then awkward, and finally uncomfortable before the last guests leave. That often is punctuated with a round of what we used to call “vestibuling,” where the diehards stand up (yes), put on their coats (OK), head toward the door (hooray) — and then stand there yakking for another 20 minutes in a long goodbye.

Let’s just say there was no vestibuling at The Depot Friday in downtown Minneapolis. The pavilion there, full and happy with alumni, students, employees and fans of North Dakota State University, for nearly three hours, emptied in a matter of minutes as a morning pep-rally gave way to an 11:30 a.m. tipoff of the school’s first appearance in the NCAA men’s basketball tournament.

The Bison were facing a heady first-round showdown with Kansas, the No. 3 seed in the Midwest Regional and school that beat Memphis in overtime for the 2008 championship. They were up first among the four scheduled games at the Metrodome, so a party that began at 8:30 ended, as Marquette coach Al McGuire used to say, faster than the 12:15 Mass at a summer resort.

The folks from Fargo, starting their march to the Dome and March Madness, couldn’t have run an evacuation drill any more smoothly. It was like air rushing out of an untied balloon — pffffft! — to the point that you half-expected the girders and roof overhead to sag into the old railroad barn.

“It was all pretty quick,” said Sherri Schmidt, associate executive director of the NDSU alumni association. “We had the band playing, the two cheer teams performing. The president [Joseph A. Chapman] said a few words, and that was pretty much it. It was mostly about the music and the excitement.”

Just then, a Depot staffer carried a long, fat pillar of green-and-gold balloons past Schmidt. In fact, the air hadn’t been let out of them yet. Which was the metaphor for the day, for as long as it might last. NDSU’s invitation to the so-called Big Dance was the nation’s best story in the days leading up to the tournament. Never mind Cinderella snaring the prince — just getting to the ball was upset, and magic, enough for the folks from Fargo.

“My gut tells me that Kansas is going to be tight,” said Paul Tefft, a retired schoolteacher who does consulting work for NDSU now — and is Schmidt’s husband. “People I know who saw them in practice [Thursday] said their jumpers looked way off. Too much adrenaline. We have nothing to lose. We don’t have the quickness, we don’t have the speed. But we do have the size. We’re very physically tough, and we’re very mentally tough, too. I don’t think the 10,000 or 12,000 people who drove here [from Fargo] are going to have any regrets at all, if we can keep it close. But we packed for Sunday.”

Hopefully a lot of them decided to stay through Sunday, too, in spite of the Bisons’ 84-74 loss. It was close enough for NDSU fans to feel good, a game as close as two or three possessions until the final minute, with Ben Woodside’s 37 points and his clubs’ 10 three-pointers not enough to counter Sherron Collins’ 32 points, Bloomington native Cole Aldrich’s 23 points and 11 boards and the Jayhawks’ 50 percent shooting touch.

The second round Sunday, with Kansas playing the winner of Dayton-West Virginia in one of two games at the Dome, thus won’t hold much interest for those who got their own adrenaline pumping at The Depot. But what the heck, they already were in town, with reservations and enough clean skivvies. Spring-break plans already had been altered, and they still had a critical mass of green and gold to fire up fun wherever they chose.

“This isn’t a new thing for us,” Tefft said. “We’ve won six championships in football, numerous championships in track and field. Athletically, NDSU has a very proud tradition. And a vast majority of our coaches buy into the concept of student-athletes as students first. The basketball team’s GPA, I think, is something like 3.22.”

There were five viewing parties for Friday’s game at taverns and sports bars in Minneapolis alone, and another 30 across the country. For a few hours Friday, you worried a little that Fargo might end up like Mayberry, completely distracted by civic pride while out-of-towners pounced on the First National Bank.

The distraction is gone now, but the party isn’t over until the happy folks from out west on I-94 says it’s over.