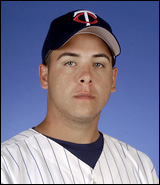 Anthony Swarzak went out on a high note, tossing seven shutout innings Saturday before being sent back to Triple-A with Glen Perkins set to rejoin the rotation Tuesday. Swarzak was solid in his first taste of the majors, going 2-2 with a 3.90 ERA in five starts, although he didn’t pitch as well as that indicates. Swarzak struck out 18, walked 10, and induced 42 percent ground balls in 27.2 innings, and Expected Fielding Independent Pitching (xFIP) shows that would produce an ERA around 5.00 over the long haul.

Of course, even a 5.00 xFIP is a pretty decent five-start debut from a 23-year-old, and Swarzak certainly showed that he’s capable of being a successful starter in the big leagues. However, in ranking him as the Twins’ seventh-best prospect coming into the season my write-up suggested that his minor-league track record “casts doubt on Swarzak’s ability to be more than a mid-rotation starter,” and he displayed some of those limitations during his first action in Minnesota.

In particular, Swarzak’s raw stuff didn’t really live up to the hype after Baseball America‘s scouting report described his “91-93 mph fastball that touches 95” and “high-70s curveball” while opining that he “has the best combination of stuff, youth, and experience” in the Twins’ system. That description of his stuff fits what fans have heard from various sources throughout Swarzak’s climb up the organization ladder, but in reality, he averaged 90.9 miles per hour with his fastball and never came close to “touching 95.”

His “high-70s curveball” averaged 75.9 miles per hour, which is close enough to the hype, but he threw it just 10 percent of the time and had little success with the pitch. Swarzak actually threw his changeup slightly more often than his curveball, but with similarly subpar results. Lack of success with off-speed stuff isn’t unique from a 23-year-old pitcher, but when combined with a fastball that clocked in at 88-92 mph, it “casts doubt on Swarzak’s ability to be more than a mid-rotation starter.”

In other words, many times going off a pitcher’s minor-league track record can tell you more than going off a pitcher’s scouting report, although I’m certainly not saying that Baseball America does a poor job. At the end of the day, radar-gun readings can simply be incorrect, and reports can involve exaggeration. But in Swarzak’s case, at least his performance at Triple-A served as a very strong predictor of his debut performance in the majors:

Regardless of the velocity of his fastball or the quality of his off-speed stuff, Swarzak had 5.9 strikeouts per nine innings with 43 percent ground balls at Triple-A and nearly duplicated those numbers exactly during his MLB debut with 5.9 strikeouts per nine innings and 42 percent ground balls. His walk rate rose, and major-league hitters were predictably able to send more of his fly balls over the fence than Triple-A hitters, but for the most part, Swarzak at Triple-A was very similar to Swarzak in Minnesota.

The scouting reports didn’t quite match the stuff that Swarzak actually displayed during his debut, calls for him to replace Francisco Liriano in the rotation were misguided on multiple levels, and there’s lots of reason to be skeptical about — don’t stop me if you’ve heard this before — his “ability to be more than a mid-rotation starter.” On the other hand, he certainly held his own through five outings and should give the Twins some confidence that they have a capable 23-year-old starter on call at Triple-A.