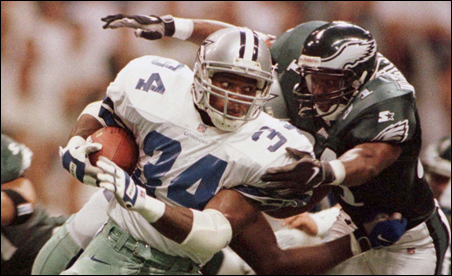 REUTERS
After three disappointing years with the Vikings and stints with two other teams, Herschel Walker ended up back with the Dallas Cowboys. Here, he’s shown in 1997 action against the Philadelphia Eagles.

With the Vikings set to start training camp, maybe the team will be better off for not getting into the “savior” business at all. Chasing Brett Favre might have worked, but things didn’t turn out so well the last time Minnesota’s NFL team, feeling an urgency to win, targeted one alluring superstar player as the answer to all its prayers.

The 20th anniversary of what many consider to be the worst trade not only in pro football history but in the annals of sports trades is fast approaching, and serves as an unpleasant reminder of what can happen — more accurately, not happen — when a team and its fans invest their hopes, dreams and ambitions in the addition of one very special player. Lately, it has been Brett Favre; back then, it was Walker, an All-Pro running back who was touted as the final piece to a championship-caliber, defensively formidable squad.

On Oct. 12, 1989, ESPN still was pre-pubescent and the Internet was a bunch of unruly 1’s and 0’s, but what passed then for a media blitz descended on Winter Park, the Vikings’ headquarters in Eden Prairie, as news of the blockbuster trade leaked out. Can’t vouch for any helicopters, but there were scads of huge, boxy television trucks, reporters and photographers scrambling to and from the parking lot and a parade of traffic being diverted away from the facility’s main entrance all afternoon.

This I know because I still have the photo: Strib colleague Curt Brown and I had set up whatever passed for laptop technology outside on the waist-high stone wall in the Vikings’ circular drive and were frantically typing, sans power cords or cubicles, in an early stab at mobile computing.

A big deal gone bad
This was, after all, a big deal. The biggest, arguably, if Favre makes good on his announced decision Tuesday to stay retired (and doesn’t make good on his coy remark about a Nov. 1 revisit to his comeback plans). 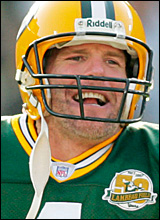 “Depending on how things work out over the next three years, yes, we could have mortgaged our future for the good of the 1989 and 1990 teams,” Vikings impresario Mike Lynn said that day. “We felt that the last piece of the puzzle, the last spoke on the wheel, was a running back. And not just a running back, but a marquee running back.

“If we don’t win the Central Division, if we don’t get to the Super Bowl while Herschel Walker is a member of the Minnesota Vikings, then we have not made a good trade.”

By 1992, the verdict was in. The Walker trade had been a disaster, not just for what it didn’t mean to the Vikings but for what it meant to the Cowboys, who turned one player essentially into 12 when all the future draft picks and other complicated conditions were sorted out. Among them: Hall of Fame-bound running back Emmitt Smith, defensive tackle Russell Maryland, safety Darren Woodson and cornerbacks Kevin Smith and Clayton Holmes.

Hoping to snooker, the Vikings instead ended up as snookees, as Dallas used roster players it got in the deal in other trades or to trigger the conditional picks in the original. The Cowboys turned the bounty into Super Bowl titles after the 1992, 1993 and 1995 seasons. The Vikings had only receiver Jake Reed through the 1990s to show for it, when all the threads were unsnarled.

Walker? He rose to the occasion at first, rushing for 148 yards just three days after the trade in a 26-14 victory over rival Green Bay in front of a Metrodome-record 62,075 fans. The first time he touched the ball, he caught a Packers kickoff four yards deep in the end zone, then blasted 51 yards down the right sideline before the play was nullified by a penalty. On his first play from scrimmage, Walker shot through a hole, avoided four tackles and raced 47 yards, the last 15 without his right shoe.

The mania subsided quickly, though. Walker went for 89 yards and his first Vikings touchdown the following week in a victory at Detroit, but 27 regular-season games passed before he would top 100 yards again. In that time, with grumbling from inside and outside the team for how he was being used, the Teflon tailback averaged 46 yards on 13 carries. The Vikings did finish 10-6 and win the NFC Central the season they acquired Walker, but they had gone 11-5 the year before; in the Herschel era, Minnesota was 21-22, losing a playoff rout in San Francisco at the end of Year 1 and then missing the postseason completely in Years 2 and 3.

Released in May 1992, Walker managed 2,264 rushing yards and 20 touchdowns with the Vikings, fewer than teammates Terry Allen (2,795 and 23) or Alfred Anderson (2,374 and 22) and, on the franchise’s all-time list, behind quarterback Daunte Culpepper (2,476 and 29). He spent three seasons in Philadelphia, gaining 1,070 yards in his first with the Eagles, before tailing off as a return man with the Giants and the Cowboys.

Six takeaways
The moral in all this? I see a half dozen, at least:

• Pinning an NFL team’s aspirations on just one player, no matter how iconic (though Walker was more bionic) always is dicey. In basketball, a superstar is 20 percent of your lineup at any given time. In baseball, he’s 11 percent (10 percent in the AL). Football has too many participants, too many variables, too much co-dependency in how a well-oiled machine works. That’s not to say that impact players don’t exist or cannot transform a team, but it is to say that it requires more than plugging a round peg into a round hole.

• All that said and considered, landing Favre would have been a different animal than acquiring Walker — and well worth the try. The price would have been only money (a reported one-year salary worth $10 million) — and possibly further bruising to the confidence of existing quarterbacks Tarvaris Jackson and Sage Rosenfels. But it wouldn’t have cost players, it wouldn’t have stripped draft picks and it wouldn’t have propped up any other franchise to win, gloat and pat itself on the back for ripping off the Vikings.

• Head coach Brad Childress was right to pursue an upgrade — in leadership, know-how and guts, if not necessarily in durability at this stage of Favre’s career — at the game’s most important, and his team’s most suspect, position. More than right, Childress was obliged, and at least he was the person pushing the pursuit. Back in 1989, coach Jerry Burns’ body language and reaction to Lynn’s Walker machinations was a loud and clear “Uh-oh!” Burnsie knew it was a make-or-break move for that team (he was gone after 1991, same as Walker). If Childress is going to rise or fall on the Vikings’ 2009 results, he was right to want Favre for the now, rather than Jackson or Rosenfels for the future.

• The same goes for any players known or not known to have text-messaged, phoned or tweeted Favre during the wooing period. Those guys want to win now, too, and it’s not as if the current QBs have earned anyone’s undying loyalty yet. If Jackson and Rosenfels are so sensitive as to be set back by this episode, they’re incapable of getting the job done in the first place.

• For all the grief that Lynn, Walker and the Vikings have taken over the trade, imagine the outcry if Walker had been traded to Cleveland instead — Dallas’ original plan — and word got out that Minnesota had a chance to snag him but passed. There never was a guarantee that Darrin Nelson, Jesse Solomon, David Howard or the draftees the Vikings might have picked would do any better.

• It was, let’s be honest, fun while it lasted. Walker running out of his shoe was fun. The potential he had to crack open a game every time he touched the ball was fun. The spring in everyone’s step for a season or so at Winter Park was fun. And, for those of us in the reporting business, the ramifications within the Vikings’ locker room, the overall strangeness of Walker’s smiling, unflappable-even-in-failure personality, the Cowboys’ turnaround and the Vikings’ bold attempt-turned-descent all were fun to follow as well.

Favre, in all his glory, his waffling and (based on last season’s Jets experience) his limitations, would have been just as fun. From the packed fields of Mankato State for training camp that opens Friday to the sellouts at the Dome that might not happen now. From the satellite trucks and national correspondents dropping by to five months’ worth of heightened border sniping between Packers and Vikings fans.

Come to think of it, I miss the indecisive, narcissistic lug already, and will until, oh, Nov. 1.