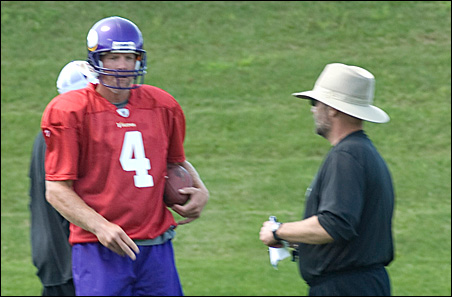 MinnPost photo by Bill Kelley
The long-awaited meeting of the minds finally happened Tuesday when Brett Favre and head coach Brad Childress got together on the practice field at Winter Park.

Brett Favre signed a two-year contract with the Vikings worth a reported $25 million, including $12 million guaranteed for the 2009 season. As for how his compensation is set up for 2010 … do we really need to go there?

For Favre or for head coach Brad Childress?

Let’s be real: This is a move for 16 games, give or take a handful, and we’re not counting the three exhibition games left on their summer schedule. Sixteen games, beginning Sept. 13 in Cleveland and concluding Jan. 3 against the New York Giants at the Metrodome. If it’s a handful more than that, then all will be well; The Vikings will have won enough with Favre aboard to push deeper into January, tasting some playoff success, certifying Tuesday’s signing/slobbering as a smart move all round.

If it’s a handful fewer than that, then something will have gone wrong — an injury to Favre, specifically, that leaves the Vikings next-to-naked at the quarterback position and delivers a kidney punch to their swagger and ambitions. At which point Favre’s NFL career likely would be over beyond even Yogi Berra’s qualifiers and Minnesota team owner Zygi Wilf would be justified and almost certain to look for new vision, new direction and new blood as head coach.

Childress feels the need to win now
The lengths to which Childress has lashed his fate to Favre’s surgically repaired right arm — and unrepaired but hawkishly monitored right rotator cuff, an old malady that you sense we’ll be hearing more about — became apparent during the quarterback’s Q&A with reporters at Winter Park Tuesday evening.

As he disclosed more and more about the Monday phone calls (first from Childress to Favre, then in various conferencing combinations that included Vikings owners Zygi and Mark Wilf) Favre sort of peeled back any cloak over the urgency Childress feels to win — and win now. Look, the whole “revisiting” still might be an elaborate smokescreen for what actually was a carefully plotted scheme to spare the 39-year-old veteran a trip to Mankato for two-a-days. But as described, you couldn’t help picturing Childress, all too aware of his limited QB options after one exhibition game, as he punched in Favre’s phone number and then broached the subject of, yes, another reconsideration.

More than that, it felt like hearing a bride describe the manner in which her groom proposed. Including the part where he works up the nerve and kneels.

“When Brad called [Monday] I was on my way up to a high school to help out with some kids,” Favre said. “We had a good conversation. I hadn’t talked to him in three weeks. He said, ‘I want to give it another shot and see if you would take the chance?’ “‘

Childress stood offstage, to Favre’s left, occasionally fiddling with a handheld device and looking, well, actually he was hard to read. No real expression. But from how most NFL head coaches like to hold their cards close, the play-by-play disclosures seemed a bit too revealing for Childress’ liking. Even if the Wilfs had signed off on the idea before the first call was placed, this move — pro or con, yea or nay — will be accounted for on the head coach’s ledger.

Not that he’d have it any other way. Or frankly has much choice.

Some other threads left over from Favre-a-palooza:

• In all the ruckus along Viking Drive in front of the Winter Park facility, I had two distinct thoughts. First, it seemed an awful lot like Herschel Walker’s arrival back in 1989, although that one didn’t have quite the numbers on site; Walker stopped at a hotel before being introduced to the media. By the way, the real cost of acquiring that Heisman Trophy-winning running back didn’t fully kick in for reporters or fans until a day or two later, when people realized: Hey, if the Cowboys cut all the former Vikings in the deal, they’ll strip a bushel full of draft picks from Minnesota. This time, the casual mention of Favre’s torn rotator cuff was the unexpected surprise that might be ticking.

The other thought on the throngs: These people are acting as if the Vikings have signed the 29-year-old Favre, rather than the 39-year-old Favre. It’s true that slipping into a familiar offense and having Adrian Peterson to hand the ball to will ease the burden on the quarterback. But Favre’s durability isn’t what it was and, in fact, might tempt him to stay in or even start games that he shouldn’t. Not to keep his consecutive starts streak alive but out of his innate pride and orneriness.

As for late-game heroics, those still might be possible. For perspective, the second of Warren Moon’s three Vikings season, 1995, was the one he started at age 39. That year, though the team went 8-8, Moon led the league with 377 completed passes, connected on 62.2 percent of his attempts and threw for 33 touchdowns and 14 interceptions. His quarterback rating of 91.5 was the second-highest of his Hall of Fame career. Favre — who was 29 when the 1998 season began — led the league with 347 completions at a 63 percent success rate, threw for 31 touchdowns and 23 interceptions and had an 87.8 rating. The Packers went 11-5.

Late-game theatrics? Not so possible. As Childress reminded people Tuesday: “You can’t take your helmet off on the field and wave it around anymore, or you get a 15-yard penalty now.”

• Favre’s tale of his tearful back-porch conversation with his 10-year-old daughter, Breleigh, is either a terrific marketing image and Rockwell moment, or it is one fat, hanging curveball for an “SNL” parody. Not to seem entirely cynical, but Favre shared with the world how upset Breleigh got over his initial decision not to play for the Vikings. Only then did he learn, he said, that she wanted him “to go back and win one more Super Bowl.” As Favre related: “She said, ‘Can you go back?’ And I said, ‘Well, it’s too late.’ ”

Hold up. This is Brett Favre. At this point, wouldn’t even 10-year-old Breleigh be conditioned to his notorious waffling? If she broke into tears with every retirement, unretirement, decision, rethinking and backtracking, it would be like an endless loop of Barbara Walters celebrity interviews, a non-stop waterworks.

• A news helicopter tracked Childress’ SUV from the airport in St. Paul to Eden Prairie. It hovered over the facility for most of the late morning. But when the players and coaches took the field for practice, there were no choppers overhead. The whole time. Do the Vikings have an arrangement to keep that air space clear? Nothing formal, a team spokesman said. It’s an unspoken thing, with the news channels in town well aware that they would burn serious bridges with the team if practices were scoped out that way.