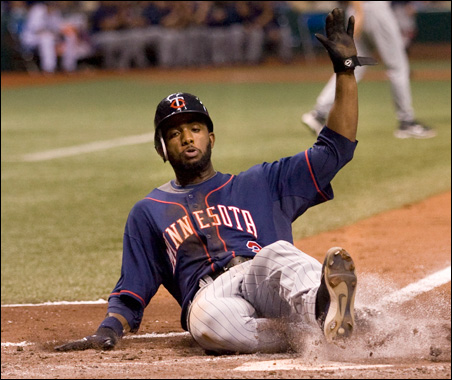 REUTERS/Scott Audette
The Twins’ Denard Span, while playing some at all three outfield positions, has hit .304 with a .391 on-base percentage and .425 slugging percentage through 220 career games.

Prior to last year, I wrote that “there’s little in Span’s minor-league resume to suggest future big-league success” and actually tried to show optimism by opining that “even modest improvements could make him an option as a reserve outfielder.” Less than two years later, Span has established himself as not only a big part of the Twins’ future but as one of the best all-around players in the entire league. I’m not quite sure how to explain Span’s transformation from bust to star, but he’s made a believer out of me.

It didn’t seem especially significant at the time because of his long track record of mediocrity, but Span quietly started to turn things around during the second half of 2007. He hit .306/.371/.393 with improved strike-zone control at Triple-A following a miserable first half and then turned things up another notch back at Rochester last year, hitting .340/.434/.481 with vastly improved plate discipline and power in 40 games. At that point, my view of Span’s potential began to change, but what came next is still a shocker.

Called up to Minnesota for good in late June, Span was in the starting lineup for every single one of the final 81 games and batted .294/.387/.432 in 411 trips to the plate. He smacked six homers after going deep a grand total of seven times in 509 minor-league games coming into the season and posted an outstanding 60-to-50 strikeout-to-walk ratio after striking out nearly two times for every walk previously. Toss in excellent outfield defense and Span ranked fifth on my ballot for team MVP as a rookie.

There was a healthy bit of skepticism regarding how Span would fare this year, but he’s looked nothing like the pre-2008 version and has basically duplicated his fantastic rookie performance over the course of a full season. He’s batting .310/.394/.419 in 127 games, producing the league’s ninth-best on-base percentage while again posting a strong strikeout-to-walk ratio at 80-to-65. His defense in center field has statistically graded out poorly, but when he’s a corner outfielder his glove continues to get excellent marks.

Basically, he’s a stud. Span has hit .304 with a .391 on-base percentage and .425 slugging percentage through 220 career games, rates as one of the elite defensive corner outfielders in all of baseball, can play center field without embarrassing himself when needed, has shown absolutely zero platoon split against left-handed pitching and, at 25 years old, is under the Twins’ control for another five seasons. Here’s how his batting average and OBP rank among all outfielders since the beginning of last year:

Span has the speed that conventional wisdom craves in a leadoff man, with the added bonus that he’s actually an ideal fit atop the lineup. He takes tons of pitches, draw walks in bunches and is one of only 12 players — regardless of position — with a .300 batting average and .375 on-base percentage over the past two seasons. The others? Albert Pujols, Manny Ramirez, Joe Mauer, Hanley Ramirez, Chipper Jones, Kevin Youkilis, Matt Holliday, Miguel Cabrera, David Wright, Nick Markakis and Derek Jeter.

Of his 215 career starts, he’s played right field 98 times, center field 72 times, and left field 45 times, but Ron Gardenhire indicated recently that he’d like to keep Span at one position beginning next season. In doing so, Gardenhire didn’t specify which position he’d prefer as Span’s long-term home, but my hope is that he ends up in left field. According to Ultimate Zone Rating per 1,400 innings Span’s defense has been 12 runs above average as a corner outfielder and 15 runs below average as a center fielder.

The true gap likely isn’t that extreme, and there are some sample-size issues at play because we’re only talking about a grand total of about 1,900 innings spread over three positions, but having watched him for two years now, I’d agree that Span is an elite corner outfielder and a mediocre center fielder. Moving him to center field full time makes sense if the Twins are absolutely convinced that Delmon Young has a significantly brighter future than Carlos Gomez, but my view is the opposite.

The jury is still very much out on both Young and Gomez offensively, but we already know that Gomez is an excellent defensive center fielder and Young is a terrible defensive left fielder. By playing Gomez and Span together, the Twins would guarantee themselves a very good defensive outfield, which is key for a team that constantly talks up the importance of strong defense and almost always features a staff filled with fly-ball pitchers. It’s tough to see a Young-Span-Michael Cuddyer alignment being a strength.

Wherever he ends up defensively, the Twins are incredibly lucky to have Span atop the lineup, because his high batting average, patient approach and fantastic on-base percentage make him a near-perfect fit there, and if not for his presence, Gardenhire no doubt would have been tempted to put two light-hitting middle infielders with awful OBPs in front of Mauer, Justin Morneau and Jason Kubel. Span has emerged as one of the Twins’ most valuable building blocks, and I’m thrilled to have been so wrong about him.