Nick Blackburn returned Monday to the scene of last season’s Game 163 and tossed another gem in Chicago, blanking the White Sox for seven innings as the Twins cut the idle Tigers’ division lead to 2.5 games. FSN announcers Dick Bremer and Bert Blyleven spent much of the game discussing their perceived differences between Blackburn last year and Blackburn this year, which actually couldn’t be further from reality based on his season totals:

Blackburn will probably start 2 or 3 more times, so the final numbers won’t be quite as identical, but so far at least, you’d be hard-pressed to find two more similar seasons from a pitcher, let alone a sophomore season that looks more like a rookie campaign. The difference, of course, is that few people expected 195 innings of league-average pitching from Blackburn last season, whereas people like Bremer and Blyleven misguidedly assumed that he’d build upon his rookie performance with an even better 2009. 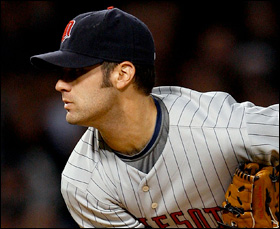 One of those “few people” driving Blackburn’s bandwagon all along is Baseball America editor-in-chief John Manuel, who ranked him as the Twins’ top prospect heading into 2008. I criticized that ranking in this space and ended up making a bet with Manuel that set the over/under on Blackburn’s career wins at 70. He’s at 22 wins right now and will be 28 years old before next season, so I’m feeling good about the bet, although Blackburn’s up-and-down year has produced some amusing e-mail exchanges.

My point at the time was that Blackburn was already 26 years old and had, at most, mid-rotation upside, so ranking him No. 1 even in a mediocre system was off base. Manuel’s point at the time was that the Twins lacked anything resembling elite, sure-fire prospects and Blackburn was better than people like me thought, so ranking him No. 1 made sense.

Two years later, I’d say that we were both sort of right. Blackburn hasn’t produced like my idea of a No. 1 prospect but has outperformed my expectations.