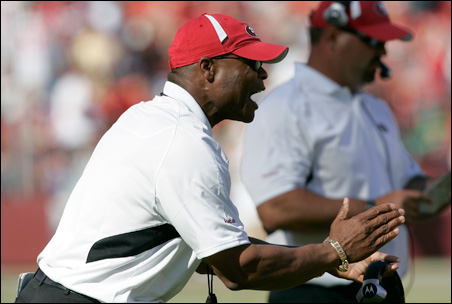 REUTERS/Kim White
Head coach Mike Singletary, shown yelling encouragement during Sunday’s game against the Seattle Seahawks, will bring the reinvigorated 49ers to the Metrodome for the Vikings’ home opener.

Less than a year ago, a neophyte football coach named Mike Singletary dropped his pants in the San Francisco 49ers locker room in a spectacular commentary on his stumbling football team’s first-half performance.

No such theatrics took place in the Minnesota Vikings’ locker room in Detroit Sunday. The Vikings’ meticulous Brad Childress doesn’t do credible burlesque. Moreover, the Vikings’ eventual 27-13 victory was all but inevitable. The Lions haven’t won for two years. And while they played with spunk and energy, they were not going to seriously contest the strongest team in NFL’s North, as erratically as it played in the first half.

But Singletary and his 49ers will burst into the Viking scenario this week, having emerged from their muddlings of a year ago. On Sunday at the Metrodome, they will confront the Vikings in an improbable meeting of the unbeatens that will match the Vikings’ supercharged Adrian Peterson against the 49ers’ Frank Gore. Gore is the player that Peterson valued above all others when Gore was chewing up yardage as the University of Miami star. Peterson then was a high school player being pursued by college recruiters. For the record, on Sunday Peterson logged 92 yards that included a typical touchdown run of 22 yards that left debris of fallen bodies behind him.

In the meantime, Favre was completing 23 of 27 passes, two for touchdowns with no interceptions, registering a high 115 on the quarterback efficiency scale and breaking one more record by starting in his 271st consecutive game — all of this admittedly against a team losing its ungodly 18th straight.
Nearing 40, Favre Sunday seemed more susceptible to the blitz than in his ability to quickly integrate with the team and to lift it with the playground buoyancy that has been a special part of his extraordinary career. The players clearly like and admire the guy, and the bonding seems authentic. He was comfortably in command at the line of scrimmage, took the hits in stride and found another receiver in Bernard Berrian Sunday, having already located Sidney Rice, Percy Harvin and Visante Shiancoe.

All of which turned out to be relevant to what was happening a few hours later in San Francisco. There, Gore went 79 yards for one touchdown and 80 yards for another in the 49s’ 23-10 upset of Seattle, a week after the 49ers had defeated the Super Bowl runner-up Arizona Cardinals. This was a San Francisco team that was the dregs of the west when Singletary was elevated to the head coaching job early last season.

You have to remember Mike Singletary as the Chicago Bears’ linebacker who drilled quailing quarterbacks with his laser stares across the line of scrimmage. And there was the epic news conference scene after he took over the 49ers’ coaching job and ordered one of his players off the field and out of the game for a senseless penalty and lethargic play.

Singletary recited his creed like a man down from the mountain, indicting players who did not commit on every play. “I’m old school,” he said. “Cannot play with them [self-absorbed players]. Cannot win with them. Cannot coach with them.” And now the 49ers are leading their division. The player, Vernon Davis, is still on the team, his behavior undoubtedly modified by Singletary’s X-ray therapy.

In Detroit Sunday, the Vikings raised almost as many questions as they answered. But it’s obvious that the Favre-Peterson linkage has captivated the pro football millions as well as the TV advertising producers. What we saw Sunday was a maturing of the partnership.

They’re an odd couple in their playing field demeanor. Favre, the aging superstar, often plays the game like a gleeful truant romping around in search of a fishing hole. Peterson runs like an avenger. His sudden shifts in direction in full stride and at open field speed are stunning. Some of the great runners — Walter Payton, Eric Dickerson, Barry Sanders — had the same instincts, speed and drive. But Peterson, otherwise a sociable sort, runs with a ferocity that comes close to raw anger.

It was there in Detroit, Peterson going head to head and out of bounds with a linebacker or clawing his way through traffic, on the run. This is a man on a mission. Within the context of being a team player, he wants the records, wants the ball, as a runner or receiver. He wants to be the greatest, insofar as that quality can be measured in the arithmetic of rushing yardage. Dickerson gained 2,105 one year, the record. Peterson in his third year started with 180 and 92. He needs to average a little more than 130 yards a game to beat Dickerson. He will be aware of the numbers.

For Favre, the waffling gags pretty well have run their course around here, partly prodded by a hilarious commercial for Sears in which Favre as a TV customer confides to a salesman that people who can’t make up their minds drive him crazy. He picks out a set. The salesman congratulates him. Favre says, “Well, I don’t know.”

But two things the former NFL referee Bernie Kukar knows about Favre: “I think he may be the toughest guy I’ve ever seen in football. And I don’t know a man the other players respect more. You could see it in the rush when he was back to pass. After he threw, they’d ease up on the rush. They don’t do that for everyone.”