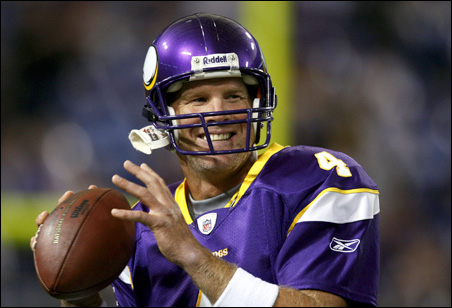 REUTERS/Eric Miller
Brett Favre’s trophy case is already bulging, but the Vikings have something to prove because the politicial stakes for the team this year are high.

Brett Favre steps out of his robes as the conflicted Hamlet of pro football Sunday and straps on his guns. Millions of star-struck Viking fans can’t wait for the sight.

Neither can Favre. Football, real hammerhead football, is his sandbox, passion and his identity.  The psychoanalysis of Brett Favre that he provoked and then joined in the last two years is his penance. It morphed into something close to burlesque in the last three weeks. But most of that dissolves at high noon in Cleveland Sunday. The game is on, and he’s in it. God’s in his heaven and Brett is slinging footballs.

What are the stakes in all of this?

Not so much for Brett Favre. His trophy case, including the Super Bowl, is  bulging. None of his biggest records are going to be surpassed soon if at all. And the stakes for the Vikings?

How many ways can you spell immense?

This is a team with serious championship possibilities, now endowed not only with a wise old and creative quarterback running the show but with THE wise old quarterback. A few feet behind him on most of his play calls will be the best running back in football, Adrian Peterson. The team’s defense — assuming the Williams’ steroid case will be continued into the 2010 elections — is one of the best in pro football. Out on the wings some of the time will be Percy Harvin, the sprinter from Florida who may be a legitimate fireball this year.

None of that guarantees a deep playoff future for the Minnesota Vikings, and if you saw the Pittsburgh Steelers and Tennessee Titans’ slugging match Thursday night, you understand why. There weren’t many points. They compensated with hostility. It was savage, last-man-standing football and probably explains why the Steelers wear the rings. In the chilling words of Steeler coach Mike Tomlin, “our goal is to impose our will on the other team.”

Political refrain
Yet more than winning or losing is tied up in this season for the Minnesota Vikings. In 2011 their lease is up on the abused and comical old Metrodome. The Vikings have been campaigning for a new stadium for several years and doing it with relative diplomacy. The underlying scenario is that they may have to abandon 12,000 lakes in favor of the Pacific Ocean and Los Angeles. Until now they have left that threat to friendly town criers in parts of the media. With new stadiums opening for the Gophers and Twins with taxpayer support, the campaign will reach a critical mass in 2010 when the Vikings will come before the state with their version of the familiar political refrain of the season: “This is our moment, this is our time.”

It’s a reasonable argument that will take on extra voltage and edge if the Vikings win big this year and become as nationally prominent as, say, the Steelers, New England, the Giants and Dallas. Is pro football a civic asset, a source of pride and community? It is. Does the public have a stake? It does. But the Vikings opening ante — $250 million alongside a presumed $700 million from the recession-mugged taxpayers — is not a figure to attract universal love from either the taxpayers or legislators.

Zygi Wilf, the head of the Vikings’ ownership family, is probably your kind of millionaire. He’s approachable, generous with his payroll in acquiring high-end talent and a kind of visionary — if by that you include promoting a football stadium to partner with  real estate development in downtown Minneapolis.

Dead last
Nothing especially wrong with that. Let entrepreneurs be entrepreneurs as long as the money they’re playing with is substantially house money. The Vikings rank dead last in the National Football League in revenue generated by the Metrodome and have to depend in part on a league dole, called revenue sharing, to stay competitive. The unavoidable Jerry Jones of the Dallas Cowboys was in town last week boosting the Vikings’ case, lecturing Minnesotans on their civic duties and reminding them that the civic-minded citizens of Arlington, Texas, pitched in to help him build the new Buckingham Palace of football stadiums in, of course, Arlington. Right. Arlington put up $300 million. Jones paid the rest of the $1.2 billion. This is not quite the three-quarters share of the load the public would pay under the Vikings’ current formula.

So what matters in the football season of 2009 will bear on the blockbuster debate where the state is heading next year. The Brett Favre story, his performance, the condition of his arm, the wear and tear of 17 years in the pro football meatgrinder, will be in the middle of it; and the only sure bet is that nationwide the NFL’s football of 2009 will be lifted to unprecedented levels of popularity, extravaganza and carnival.

Essentially, it is going to be inescapable. Tim McGraw ushered in the season last night with world class decibels, shooting stars and smoke bombs. They even found a singer who could deliver the national anthem as written, without being penalized for delay of game. In pro football in America, all things are possible.

But do not, incidentally, forget Adrian Peterson. It’s a cinch nobody on the other side of the ball will.

MinnPost journalist Jim Klobuchar will appear tonight onTPT’s “Almanac” to talk about his new book about the NFL, “Always on Sunday,” and the upcoming Vikings season. The public affairs program airs at 7 p.m. tonight on Channel 2 and is rebroadcast at 9:30 a.m. Sunday.

The hidden stakes in the Favre gamble