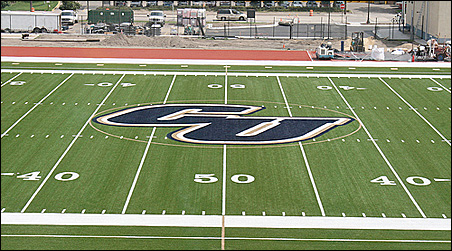 Two windows of Mark Mauer’s new office overlook Sea Foam Stadium, the freshly built football and soccer facility at Concordia University in St. Paul. From Mauer’s perspective as the Golden Bears’ head football coach, the sight is as welcome as an ocean view at a Caribbean resort in January.

An eight-lane track surrounds the artificial turf field with a Concordia logo at midfield. A 2,500-capacity grandstand, with a press box on top, gleams in the sunlight. Mauer’s second-floor office, in a retrofitted building formerly owned by the St. Paul Water Utility, is large enough to hold position group meetings with a dozen or so players. The building itself looks new but actually is so old that stenciled outlines of the letters “Blacksmith Shop” are visible over the entrance to the training room. Except for some detail work, Phase 1 of the $14.5 million project is complete.

If this is the first you’ve heard about this project, you’re not alone. With TCF Bank Stadium ready for play in Dinkytown, and the grass at Target Field taking root, Concordia’s new digs barely merited a sliver of media attention. Mauer said no TV crews showed up the day the artificial turf went in, unlike the orchestrated commotion at the new Twins ballpark, which timed the first installation of sod for the 10 o’clock news.

Since coming to Concordia in 2004, Mauer — the ex-Nebraska quarterback and a cousin of the Twins’ Joe Mauer — faced the daunting task of selling a Division II program to recruits without top-flight facilities. Now, Mauer has more to talk up besides Concordia’s academic reputation.

“It’s going to help tremendously,” Mauer said. “Kids like being in the metropolitan area to start with. But you have to show them bells and whistles, a training room, a weight room. They see them at all the other schools.”

Concordia moved up to Division II in 1999, becoming the only D-2 program in the Twin Cities. But it lacked the facilities to match its vision. The football team played down the street at St. Paul Central High’s Griffin Stadium, as it had for most of its 40-year history. (In 1994 and ’95, it used Concordia Field, the on-campus home of the women’s soccer team.)  The school offered a track and field team, but had no track. And the softball team also played off-campus.

The Gangelhoff Center, completed in 1993, houses the two-time national champion volleyball team as well as basketball. Mauer said he took the football job knowing the school’s commitment to building a new stadium. But fundraising efforts had fallen short until alumnus Phil Fandrei took an interest.

First, a little Concordia history. Founded as a high school in 1893, Concordia for decades prepared young men for Lutheran ministry. A two-year curriculum was accredited in 1921, and Concordia expanded to a four-year college in 1962.

Football was a late arrival. The college did not field a team until 1969, but the high school started one in the 1940s, using a campus field eventually consumed by Interstate 94 construction. Fandrei, a 1951 graduate of the college, was on the high school’s first team. “My father bought the uniforms,” he said.

Fandrei’s father, Fred, made his fortune in foam. In the 1930s, he invented and produced an additive for marine engines called Sea Foam, which kept gas/oil mixtures fresh. That business grew into the Sea Foam Co., which Phil bought from his father in 1979. Phil sold his interest in 1991 but remained on as an executive.

Stadium fundraising lagged, because Concordia’s older alumni base is heavy with Lutheran ministers, teachers, and others of modest means. Fandrei is an exception. On behalf of Sea Foam, he pledged $5 million toward the stadium project.

“To God be the glory,” said Rev. Dr. Robert Holst, the university president, “but the thanks be to this man.” 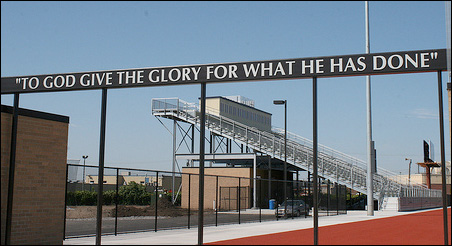 Said Fandrei: “They had to have these facilities sooner or later, but when was that going to be? I stepped up and made the first donation to get us started.”

And start it did. An anonymous donor contributed another $2 million. More than 200 smaller donations combined to raise the final $1 million for the $8 million Phase 1. The cost included a bubble around the field, which will go up after football season and permit year-round use by university and community teams.

Unlike TCF Bank Stadium and Target Field, Sea Foam was built strictly through private donations. Of course, it cost much less than TCF ($288.5 million) and Target Field ($412 million).

Sea Foam Stadium benefits not only football and women’s soccer (Concordia has no men’s team), but softball as well. With the shift of soccer to Sea Foam, Concordia Field has been remade into a softball field, named for donors Richard and Lorraine Carlander. That gives one more nomadic team a home.

Last week, Fandrei beamed as he and other friends of Concordia visited the nearly completed stadium. “It’s a community thing,” Fandrei said. “When the bubble goes up, they’ll be playing soccer all year-round. It’s a faith thing. And it’s a pride thing.”

The proposed Phase 2 includes a three-story athletic facility to house locker rooms, a weight room, the stadium press box and permanent offices for the coaches. The school still needs to raise more than $6 million to cover those costs, according to Eric E. LaMott, vice president for administration who oversees the project. He joked that Mauer’s office view is so nice he may not want to move.

That made Mauer laugh. Until this year, Mauer had no view at all. The football locker room and offices took up the basement of the Lutheran Memorial Center, a converted gymnasium/auditorium across Hamline Avenue from the new stadium.

Mauer could still use a full-time equipment manager and somebody to do the team laundry, tasks he and his assistants perform. His young team faces a tough go in the Northern Sun Intercollegiate Conference; NCAA champion Minnesota-Duluth routed the Golden Bears 56-0 in their season opener last Saturday.

But now Mauer has sunlight in his office, a great new place to play, and a chance to recruit better players. It may not be Lincoln, Neb., but the little campus in St. Paul keeps looking better.  “I’m not complaining,” he said.