On Friday nights before games, Kirk Talley, the head football coach at Division III Northwestern College in Roseville, invites an outside speaker to talk to his team. Respecting Northwestern’s mission as a private, Christian liberal arts college, the speaker can be anyone from a pastor to a successful alumnus to somebody’s dad.

Last week, Talley asked someone whom most Northwestern players knew well but hadn’t seen in a while.

Dave Kleiner, an all-conference defensive end and the team’s leading tackler last year before shipping off to Iraq with his Army National Guard unit, spoke about preparedness, something he practices every day as a sergeant with the 34th Military Police Company. For months, his unit helped provide security for combat mission and convoys.

“It can be pretty dangerous out there,” he said.

Then Saturday, the strapping Kleiner — home on a two-week leave — briefly pulled his old No. 56 jersey over a T-shirt so he could be introduced before Northwestern’s game with Wisconsin-River Falls. The crowd of 2,312 at Reynolds Field, which included his parents, stood and gave him a warm hand. 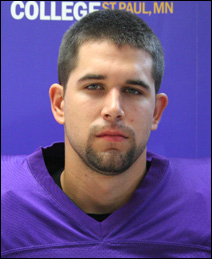 “That was really nice,” Kleiner said as he watched the scrappy Eagles hang tough with the bigger, faster Falcons before losing, 20-17. “I knew they were going to do something, but I didn’t know what to expect.

“Before I left the first time, they held a special chapel for me. These are great people to be around.”

Kleiner, 23, headed back to Iraq on Monday to complete his tour, which is scheduled to end in February. He hopes to resume his football career at Northwestern next fall. He will be a senior academically but has two years of eligibility left. And at 6-3 and 235 pounds, Kleiner will be a welcome sight in a purple-and-gold uniform. “We could have used him (Saturday),” Talley said after the undersized Eagles gave up 177 yards on the ground.

Rarely will Talley cut anyone who comes out for football, even someone with no experience. Kleiner, of Lakeville, represents one of his success stories. A third baseman on Northwestern’s baseball team, Kleiner never played scholastic football because his high school, Bethany Academy in Bloomington, did not have a team. His brother, Kevin, was already a starting offensive tackle for the Eagles. So in 2007, Dave tried out.

“We told him we’ll work with you,” Talley said. “We don’t usually turn guys down, especially when they look like him, though he wasn’t as big then.”

Often in practice, the Kleiners lined up across from each other. “It was great,” Kevin said. “By his second year playing, he knew what he was doing. Coach Talley would be like, `The Kleiner brothers are going at it today.’ I’d like to say I won for the most part, but it was good for both of us. It was fun.”

The second-oldest of the four Kleiner brothers, Dave joined the Guard in 2005 after his first year of college, knowing it meant an Iraq deployment in his future. “I thought it was a good start in life,” he said. “I wanted to serve my country, obviously. I wanted to get some experience and grow up a little bit.”

Kleiner kept Talley apprised of his upcoming deployment, and Talley excused him from some practices last year when Kleiner needed to prepare.

Though the Kleiners are not a military family, Dave’s service commitment has had an influence. Two cousins joined the Army in recent years, as did the youngest Kleiner brother, 18-year-old Ethan, who left three weeks ago for basic training. “Dave said he’ll grow up a little bit, and it will be a great experience for him,” Kevin said.

Naturally, Kevin enjoyed Dave’s talk Friday night. But standing on the sideline in uniform on Saturday for Dave’s big moment proved tougher to handle than he expected.

“It was a little emotional for me,” said Kevin, a senior. “I got a little choked up, and I’m getting choked up thinking about it now.

“I’m so proud of him. And seeing the support of the whole school, it was pretty cool.”