When you have been released by NFL teams as often as former Gustavus Adolphus wideout Ryan Hoag has — seven times by five organizations, to be precise — you learn to appreciate a moment of success, even if it’s not in the league you ultimately hope to be.

Six years after the Oakland Raiders took Hoag with the final pick of the 2003 draft, making him the so-called Mr. Irrelevant (a semi-gag award given to the last player chosen every year), Hoag made the opening-night roster of the New York Sentinels in the United Football League. Never heard of the UFL? It’s a four-team startup minor league, and you’re probably more familiar with the names of the coaches — Dennis Green and Jim Fassel, to name two — than most of the players.

Hoag harbors the same dream as everyone else, though at 29 the window of opportunity is closing on his fingers.  But Hoag’s perseverance so impressed the Sentinels head coach Ted Cottrell — yes, the former Vikings’ defensive coordinator — that after the final cuts, Cottrell lauded Hoag in a team meeting and asked him to tell the others his story.

Accolades from the coach
“It shocked me,” Hoag said in a telephone interview last week. “It was something I didn’t see coming.

“It felt good, I’ll tell you that. I felt proud to be in that room. To get a shout-out from the head coach in front of the whole team, that was special.”

Gustavus alums and fans followed Hoag’s progress in a blog he writes for the athletic department’s website. (He also gained a fair share of attention during his 2008 appearance on ABC’s reality show “The Bacherlorette.”) 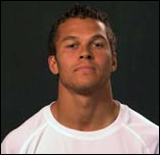 Hoag’s pro football resume reads like that of a guy who can’t take a hint. Since Oakland drafted him in ’03 after a stellar career with the Division III Gusties, Hoag has been cut by, in order, the Raiders, the Giants, the Vikings (twice), the Redskins (twice), the Edmonton Eskimos of the Canadian Football League, and the Jacksonville Jaguars.

He spent parts of four seasons on NFL and CFL practice squads, and was briefly with Berlin in NFL Europe. Hoag has never played a down in the NFL, coming closest in 2004, when he spent three weeks on the Vikings’ active roster without suiting up for a game.

So why keep at it? Because as recently as last year, Hoag made it to final cut-down day before the Jaguars released him. He’s been so close so many times, he said, that he wants to exhaust every possible chance so he’ll have no regrets when he finally moves on to teaching and coaching.

Old Viking connections
Those old Vikings connections helped Hoag hook on with the Sentinels. Besides Cottrell, the staff includes offensive coordinator Wes Chandler, who was Hoag’s receivers coach with the Vikes. And John Tice, brother of Mike and another former Vikes’ assistant, coaches the offensive line.

Though Hoag had, by his estimation, his worst training camp ever, his special teams play earned him a roster spot. Hoag has yet to catch a pass in the Sentinels’ first two games, but he plays on all four special teams. That’s where Hoag pins his NFL hopes.

The UFL has no affiliation with the NFL, but it does have a television contract, with Versus. Though its four franchises bear geographic names, only one is based accordingly. Two train in Orlando, Fla. (New York and Florida) and two in Arizona (California, Las Vegas). Hoag and his teammates practice at the Citrus Bowl and live in a resort near Disney World.

Each team plays six games at various venues. On Thursday, the Sentinels are scheduled to face California in a televised game at Giants Stadium (6 p.m. Central time, Versus). Both teams are 0-2.  New York’s next two “home” games are at Hofstra University in Hempstead, N.Y., and then in Hartford, Conn. The Hofstra game had been scheduled for Citi Field, the new home of the New York Mets. The league’s championship game will be Nov. 27 in Las Vegas.

He’s clearly not doing it for the money but, rather, for the chance to catch on again with a pro team. Best guess: Hoag is probably making at least as much as he would on an NFL practice squad (a minimum of $5,200 a week)  but way less than the NFL player minimum (a little more than  $18,000 a week).

Hoag said the league allows players to negotiate with NFL teams beginning Nov. 1 and can sign Nov. 20. That’s the day the UFL regular season ends, and three days before Hoag turns 30. No wonder Hoag referenced Vince Papale, the subject of the movie “Invincible,” as his inspiration. The Eagles signed Papale as a 30-year-old rookie wideout and special-teams player in 1976, and he hung on for three seasons.