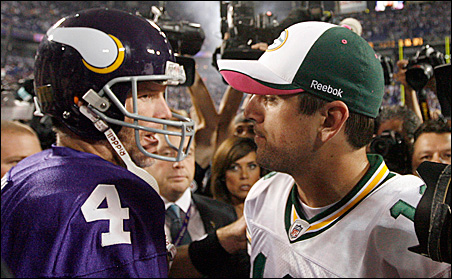 Not every Minnesotan caught last night’s Vikings-Packers game. MinnPost’s Jim Klobuchar is traveling in Egypt this week, so another MinnPost sports writer, Steve Aschburner, is analyzing the game for us. Jim’s reports return Oct. 19.

As Brett Favre got the revenge he never was seeking against a team like any other in a game Monday night that was no different from the other 276 he’d played in during 19 NFL seasons, two thoughts stuck with me:

• This is bigger than Favre settling a score with the Green Bay Packers.

• The question mark hanging over Favre is bigger now, too. Because this, after all, is only Week 4.

First things first: Favre got to exorcize — on artificial turf in the Vikings’ 30-23 victory over Green Bay — the sort of demons most brink-of-40-year-olds have to drop big bucks and log serious time on a therapist’s couch to shed. As he did it, though, and as the multichromatic contrast — Favre in purple and white, his old squad in their barely green-and-gold road uniforms — played out vividly on our big-screen, this seemed less and less about those 16 seasons in Green Bay and more about this season, here and now, in Minnesota.

What surely was jarring for a national audience and what most Vikings fans have gradually warmed up to — seeing Favre in the colors of a hated rival, as difficult and wrong for folks in Wisconsin as, oh, watching Harmon Killebrew finish up in the Kansas City Royals’ powder blue way back when — seems a lot more natural today. Just seven weeks after he arrived to equal parts hoopla and hand-wringing, Favre has four victories, a stunning comeback and a payback victory in the books, not to mention a team and the franchise’s fans eating out of that remarkable right hand.

“We have No. 4 now,” receiver Sidney Rice said late in the evening, after catching the second of Favre’s three touchdown passes. “He’s a part of us now. He’s a huge part of now. He’s running our ship.”

For all of the buildup for the “MNF” game, after so much feigned casualness and insincere shrugs about the emotions involved and what they all meant to Favre, the Packers, Green Bay GM Ted Thompson and coach Mike McCarthy and civilians lined up on both sides, it looks and feels now simply like a hump over which they all needed to get. A speed bump. For the Vikings at least — for the Packers, it might be more of a sink hole.

To me, this had the feel of a sports coming-out party, not unlike Jim McMahon’s heroics at the Dome in 1985 in a Thursday night game that propelled the Chicago Bears to their shuffle-icious Super Bowl season. Or Michael Jordan hanging 63 points on the Boston Celtics earlier that year, serving notice of what was to come. Should the Vikings and their quarterback accomplish their “other” goals for 2009-into-2010 — besides beating those guys from Lambeau — we’ll look back on this game not only in February but for years to come as the spark, a turning point as much as anything can be in a steady 4-0 start.

Unless, of course, it’s not. That brings us to the second impression: The Vikings have 12 more games to play in the regular season, then at least two more if they want to merely reach the Super Bowl. We’re still more than three weeks shy of Halloween, a reminder that the New York Jets got to Thanksgiving last fall at 8-3, excited beyond all expectations by Favre’s play and their own potential. Then Favre torn his right biceps muscle, the Jets fizzled to a 1-4 finish to miss the playoffs and both the quarterback and his head coach, Eric Mangini, got disappeared from the swamps of Jersey.

Even with the Nov. 1 game at Lambeau as a beacon for Favre to heed, as the dog whistle to perk up his ears, it was the tail end of the season that gave him pause way back in the summer. Even Favre wasn’t sure how he would hold up physically and how the passion to face and beat his former team might settle into something more sustainable to and through the playoffs.

When I spoke Monday to Favre’s longtime Green Bay center, roommate and friend Frank Winters about this Vikings phase, Winters said: “Who knows? He might get to that point later in the season, get to that mental mind game where he says, ‘Well, maybe I should have stayed retired.’ Right now, it looks like he’s having fun winning. But that’s a question you’ll probably want to ask a month down the road, seeing how things go.

“Last year, the Jets were the Cinderella team in the NFL. People were talking about an all-New York Super Bowl. Then the wheels came off and they didn’t even make the playoffs.”

Despite hoopla, Favre’s victory over Packers really just a speed bump Vikings had to cross — or is it?