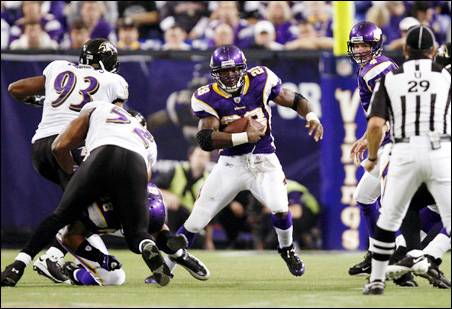 He was a young field goal kicker who seemed miscast in the climactic moment of a bizarre football game Sunday. It had begun as a high-fiving, “ain’t-we-great” romp for the undefeated Minnesota Vikings. Without warning, the game turned into a fourth-quarter horror show for the stricken Metrodome crowd, and now Steve Hauschka entered the game, improbably with a chance to win it for the Baltimore Ravens.

He looked tense and uncomfortable. He’d kicked a shorter field goal earlier, but now the goal posts were 44 yards away. Most pro kickers welcome the distance and make it 65 or 70 percent of the time. But in the sepulchral silence of the Metrodome, for Steve Hauschka, it meant winning or losing, a lonely time for a young kicker.

For the Ravens, the take-no-prisoners linebacker, Ray Lewis, raged and charged recklessly in the middle, and young Joe Flacco threw for more than 300 yards and two touchdowns. In the closing minutes, it became a game of dueling heroics. Flacco’s aerials and running back Ray Rice shredded the Vikings’ acclaimed defense and erased the 27-10 lead that the Vikings had built with Favre’s second touchdown pass to Visante Shiancoe with 10 minutes remaining.

But in the dwindling minutes and with his team suddenly trailing 31-30 and seemingly bewildered, Favre responded once more. With one 58-yard heave to Sidney Rice, he blunted the Baltimore comeback to set up Ryan Longwell’s fourth field goal for a 33-31 Viking lead. Flacco and Ray Rice, however, brought the Ravens back into field goal range with seconds left.

The lonely life of a kicker
Hauschka entered, a lanky kid who played soccer and lacrosse in New England, a promising kicker but now thrown into the cauldron with millions of eyes glued on the game and with money on the line. He came in with the look of a man isolated on an island, needing a friend. You could have predicted that he wasn’t going to make it. On the sidelines, the author of a hundred fourth-quarter comebacks, Brett Favre, turned his head and couldn’t watch. But the kick sailed wide left and the Vikings won it 33-31.

It means there are now only two unbeaten teams in the National Football Conference, the Vikings and New Orleans Saints, moving into the thick of the 16-game season NFL season. The Vikings stand 6-0, and New Orleans is 5-0 with Drew Brees, its record-setting quarterback who leads a team that scores points gluttonously. The teams do not meet in the regular season.

Whatever questions remain about the Vikings as a viable Super Bowl contender — not everybody in football is sold on that — will await their meetings with Green Bay, the Chicago Bears (twice), the New York Giants and — are you ready for some really Neanderthal football? — the defending Super Bowl champion Pittsburgh Steelers on Sunday in Pittsburgh.

The Vikings’ escape at the Metrodome Sunday was nothing that needed any special apology. The Ravens are struggling, but it’s essentially the same Baltimore team that fought to the brink of last year’s Super Bowl before losing to Pittsburgh in the AFC playoff finals.

They looked harmless enough through more than three quarters. Lewis huffed and growled, but Baltimore couldn’t run and Favre, Vincente Shiancoe, Sidney Rice and Peterson romped to a 14-3 halftime lead that stretched to 27-10. The atmosphere on the Viking bench approached carnival time in Venice, with Favre and Allen leading the merriment.

But after Antoine Winfield disappeared from the Vikings pass defense with a foot injury. Flacco gathered himself in the second half, fighting off the Viking rush and exposing a secondary retreaded with Karl Paymah replacing Winfield on the corner and Husain Abdullah in for Bennie Sapp, who had suffered dizzy spells. Flacco trimmed the Viking lead to 30-24 with a touchdown pass to Derrick Mason. A few minutes later, Ray Rice shocked the Vikings’ acclaimed defensive front with a 33-yard touchdown run that was virtually uncontested from start to finish. And suddenly Baltimore led 31-30.

A bit of a shock but no awe
But Favre didn’t become Favre by being over-awed by young quarterbacks with nerve and big arms. He had experienced bigger shocks than the Baltimore fourth-quarter revival. With the Vikings now trailing, the old man re-entered the game and without prelude sent Sidney Rice downfield again. Seeing an opening, Rice altered his route and went deep. Favre read him all the way and cranked a 58-yard bomb that spiraled into Rice’s hands in stride He caught the ball while being nearly garroted by defender Frank Walker, and it led a few moments later to the Longwell field goal that ultimately won the game.

Afterward, there was as much numbness as relief in the Viking locker room. “You’ve got to be able to finish,” coach Brad Childress said. “Our guys did just enough to finish and win.” Said Favre, “We dodged a bullet.”

When it was over Childress sought out John Harbaugh, the young Raven coach with whom he had worked earlier in their careers. They embraced, and Childress clearly tried to console Harbaugh with the obvious: His team had lifted itself off the floor and he had a right to be proud. Harbaugh said as much to his team afterward.

Childress has been in that place himself. What he knows now is that Pittsburgh, the Packers and the Giants lie ahead, his team can compete with anybody and is better than most if not all of them. He also knows that nobody replaces Antoine Winfield.

Childress is the ultimate pragmatist. He knows now that his team is capable of absorbing shocks without collapsing. He also knows that as currently constituted, his team can reach the Super Bowl. Currently constituted means Brett Favre running the offense, Adrian Peterson terrifying the other guys’ defense and Winfield staking out the corner. If you have to change any of that, start worrying.

The Ravens ran out of heroes, and the Vikings escape unbeaten