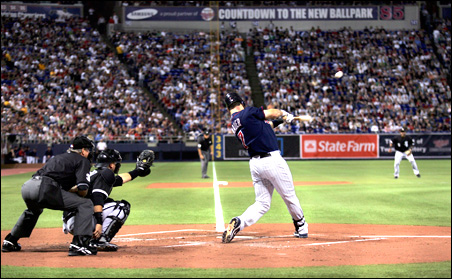 REUTERS/Eric Miller
To develop a championship team long term, the Twins hope to develop prospects that can surround stars like Joe Mauer with quality players up and down the lineup.

Lost in the Twins’ late-season turnaround, dramatic Game 163 victory and quick playoff exit is that they made a significant international signing, handing a $3.15 million bonus to a 16-year-old shortstop from the Dominican Republic named Miguel Angel Sano. Considered by many to be the best international prospect available this year and one of the most advanced bats to come out of the Dominican Republic in a long time, Sano saw multiple teams end their pursuit once MLB was unable to confirm his age.

Instead of signing along with the rest of this season’s top international prospects in July, he waited until late September, choosing the Twins over the Pirates and several other teams. While he ended up with less money than initially expected, the $3.15 million bonus is the second-highest ever given to a Latin American prospect and by far the most the Twins have ever spent on the international market. And his signing is just part of the Twins’ increased aggressiveness on the prospect front this year.

In addition to giving Sano a record bonus, the Twins signed 16-year-old German outfielder Max Kepler for $775,000 and 16-year-old Dominican shortstop Jorge Polanco for $750,000 while investing more than the MLB-recommend slot price for first-round pick Kyle Gibson. In all, they’ve dropped about $12 million on prospects this year, which is a huge amount for a team with a $65 million MLB payroll and a welcomed change from their past frugality in this area.

Baseball draft picks are amazingly unpredictable, particularly compared with other sports, and teenagers from the Dominican Republic or Germany are even bigger risks. However, snatching up top talents that drop in the draft because of bonus demands is a tactic that big-payroll teams have long exploited and a big percentage of MLB’s superstars were signed internationally as teenagers. Investing in high-upside risks makes a lot more sense than spending $12 million on the next washed-up veteran free agent.

In other words, the money paid to Sano may be massive in the context of prospect signing bonuses, but $3.15 million is still less than Nick Punto made this season (and will make next year). If one among Sano, Gibson, Kepler or Polanco turns into a starting-caliber MLB player, the $12 million investment will prove to be a bargain, and if a star emerges from that group, the Twins will have elevated the team’s long-term outlook for about as much as they wasted on Livan Hernandez, Ramon Ortiz and Craig Monroe.

Sano’s contract was contingent upon his receiving a work visa, which the government officially issued him this week, but even if everything goes smoothly on and off the field, he’s obviously a long way from the majors. That risk — and a delayed payoff — is why investing in international prospects requires a team with some gamble in them, but the consensus is that Sano has almost limitless upside offensively, so much so that no one seems to care that he has little shot of sticking at shortstop (or even third base).

Sano is already 6-foot-3 and 200 pounds, which obviously led to the doubts about his age, but even if he’s actually 18 or 19, the signing is something that Twins fans should be absolutely thrilled about. Had he been eligible for the draft, Sano almost surely would’ve been a first-round pick and perhaps a top-10 selection, and Gibson was widely considered a top-10 talent before a since-healed injury dropped him into the Twins’ laps at No. 22 overall.

There’s a decent chance that neither player ends up making a big impact for the Twins, because that’s just how baseball prospects work, but in terms of increasing their likelihood of developing star-caliber players and building championship-caliber teams, the Sano and Gibson signings are big steps in the right direction for a franchise that has generally been risk-averse and far too willing to drop millions on veteran mediocrity. Throwing money into the player-development machine is a much better approach.