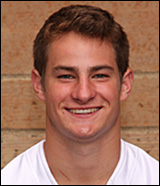 With a couple of clicks, University of St. Thomas football coach Glenn Caruso transferred the image from his laptop onto the wide-screen television mounted behind the desk in his office. And the show began.

Over the next five minutes, Caruso ran video of sophomore wideout/returner Fritz Waldvogel running and juking his way to touchdowns and long gains. In each clip, the 5-foot-9, 165-pound Waldvogel shed would-be tacklers with extraordinary moves — a spin, a fake, or a stop-on-a-dime change of direction.

On one, Waldvogel made an 80-degree cut to his left at nearly full speed.  On another, Waldvogel slowed to give a teammate a better angle to block the last defender, then slid off the block for the score, a mix of vision and instinct that Caruso still can’t believe. The highlights illustrated how Waldvogel scored six touchdowns on returns this season, the most in the country and the second-highest total in NCAA history at any level.

Larry Beavers of Division III Wesley is the only other player in NCAA history with more return touchdowns in a season than Waldvogel; he had eight last year.

Waldvogel is equally dangerous returning punts and kickoffs, with three scores each. His 36.4-yard kickoff return average tops the nation in Division III, and he leads the 9-1 Tommies in receiving (62 catches with four touchdowns) and all-purpose yards (1,675). His 10 touchdowns tie him for second on the team behind running back Ben Wortman’s 20.

“It’s magic,” said Tommies junior linebacker Tommy Becker, a transfer from Minnesota who blocks for Waldvogel on the punt return team. “I don’t know what happens when he touches the ball, but he makes something happen. I wouldn’t want to be out there trying to tackle him, and I consider myself the best tackler on the team.”

Saturday, Waldvogel will try to add to his return total when St. Thomas makes its first NCAA Division III playoff appearance in 19 years, a first-round game at Monmouth (Ill.).

That is, of course, provided Monmouth kicks to him. Which it probably shouldn’t.

In the season opener against Macalester, Waldvogel tied an NCAA record by returning two punts for touchdowns in the same quarter. In consecutive games, against Carleton on Oct. 24 and Augsburg on Oct. 31, Waldvogel took back the opening kickoff for touchdowns.

Then last Saturday against Northwestern of Roseville, Waldvogel scored on two first-half returns, 50 yards with a punt in the first quarter and 86 yards with a kickoff in the second. On the punt runback Waldvogel broke five tackles, three within the first five yards when the Eagles appeared to have him boxed in. Northwestern Coach Kirk Talley said the Eagles were trying to punt it out of bounds, but Waldvogel snagged the ball near the sideline and took it toward the center of the field. 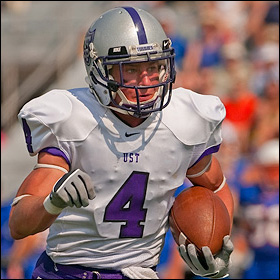 Courtesy of the University of St. Thomas
Fritz Waldvogel has returned six kicks for touchdowns this season.

“We’re not a horrible football team by any means, but he made us look that way at times on Saturday,” Talley said.

“He’s about as shifty a player as I’ve seen while I’ve been at Northwestern, and probably even beyond that. He’s got great vision. He allows his eyesight to get his legs in the right position. There are a lot of guys who are just as athletic as he is, but aren’t able to do the crazy stuff he does. He’s impressive.”

Waldvogel may be the flashiest piece of a talented Tommie program that Caruso revived. St. Thomas was coming off a 2-8 season when the Tommies hired Caruso from Macalester in January 2008. Caruso’s first recruit: Waldvogel, a late-developing wisp of a kid out of St. Thomas Academy who ran cross country until trying out for football as a high school sophomore. Waldvogel’s given name is Peter, but his family calls him Fritz, after his mother’s beloved uncle, a priest who served as a missionary in Bolivia.

“I was looking out east at Holy Cross and some of the Ivy League schools, but something here seemed right,” Waldvogel said. “My grandfather is in the athletic Hall of Fame here (Dan Schneeman, a swimmer), and he pushed me. Everything seemed to fall into place. It has good academics, good athletics, and Coach Caruso was going to come in and turn the program around. He’s very honest, and very good recruiter.”

At St. Thomas Academy, Waldvogel attracted attention as a senior with three returns for touchdowns, two on punts. Once joining the Tommies, Waldvogel ran back one punt for a score as a freshman and led the team with 59 receptions. He credited special teams coach Travis Walch for teaching him how to use and set up blockers, which made him an even better returner.

And the Tommies improved along with him. After a 7-3 finish last year, the Tommies’ nine victories match the most in school history. It also set school records with 58 touchdowns, 409 points and 2,472 yards rushing. Remarkably, St. Thomas running backs did not lose a fumble all season; Wartman hasn’t fumbled in his last 355 touches.

But St. Thomas faces a rugged test Saturday in 10-0 Monmouth, ranked No. 8 in both major Division III polls after its second consecutive unbeaten regular season. (St. Thomas is No. 10 in one poll and No. 12 in another.) The Tommies would be undefeated themselves if not for a 20-17 overtime loss at No. 4 St. John’s, which hosts Coe College in a first-round playoff Saturday at Collegeville.

Caruso’s task Saturday will be finding ways to put the ball in Waldvogel’s hands, and letting him work his magic.