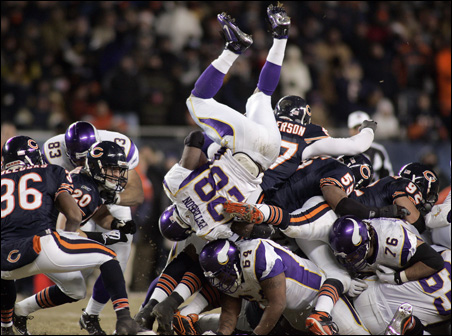 REUTERS/Frank Polich
Vikings running back Adrian Peterson dives over a pile of players for a first down against the Chicago Bears in the fourth quarter of Monday night’s game.

As midnight neared in frostbitten Chicago Monday, the game seemed to be lurching inevitably toward one more of Brett Favre’s epic rescues.  For half the game the Minnesota Vikings had wallowed aimlessly, shut out by the toothless Bears and trailing 16-0. Favre had accumulated all of 36 yards through the air.

But with a time running out in the fourth quarter, Favre drove and willed the Vikings 68 yards, as he had throughout an extraordinary second half, and sent the game into overtime with a touchdown pass to an airborne Sidney Rice with 16 seconds remaining to tie it at 30-30.

But the tormented Adrian Peterson fumbled a few minutes later and the less-than-heroic Jay Cutler, of all people, threw his fourth touchdown pass of the night for the Bears and a 36-30 victory. It saddled the nosediving Vikings with the third road loss in their last four games. It also denied them any chance for the No. 1 seed in the oncoming National Football League playoffs in January and put them in jeopardy of losing the No. 2 seed and a first-round bye.

It was a loss not crippling but even more puzzling than the earlier and decisive losses in December at Arizona and Carolina. The Bears are a disorganizing football team, damaged by injuries, divided by the sullen disposition and erratic quarterbacking of Cutler and the uninspired leadership of Lovie Smith, the coach who took the Bears to the Super Bowl four years ago but seems to have no clue about how to explain Cutler either to the fans or most of the team.

It was not the kind of game to spread the sweet scents of harmony over the week-old spat between Favre and Coach Brad Childress. It was still the ranking gossip of the week in pro football, the argument last week over Favre’s refusal to run some of the plays called in by the coaching staff. Add to that his refusal to leave the game when Childress wanted to bench him either in the interest of his health or for insubordination.

So it may not have been coincidence that the Vikings were virtually rudderless in the first half at Soldier Field, much of it spent trying to ignite the Vikings running game, and to re-wind the bewildered Adrian Peterson. The experiment sputtered early despite Peterson’s furious but unproductive stabs into the line. Favre’s passing game wasn’t any better and the Bears led 16-0 at the half on Robbie Gould’s three field goals and a Cutler touchdown pass. 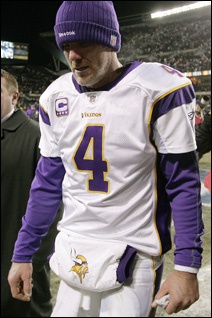 REUTERS/Frank Polich
Brett Favre walks off the field after losing in overtime.

Without any public declarations from Favre this time, it may have been time to re-introduce the offense, namely the Favre Air Force. He threw deep, he threw slants and he threw rockets, to Visanthe Shiancoe, to Rice, to Percy Harvin, to Bernard Berrian and even to Jimmy Kleinsasser, the blocking back. This tended to thin out the posses hounding Peterson, and for the last 20 minutes it was clearly a matter of whether the Bears could hang on to the finish. They did until Favre’s last-minute  pass to Rice tied the game. Gould missed a 45 yard field goal attempt in the overtime to save the Vikings, but after Peterson once more was stripped of the football, this time by linebacker Hunter Hillenmeyer, the Bears scored quickly on Cutler’s 39-yard pass to Devin Aromashodu.

In the dome Sunday
It was cold, of course. But the Vikings didn’t appear to be paralyzed by it despite their well-publicized preference for the tropical atmosphere of the Metrodome. They return to it Sunday to finish their regular season, standing now at 11 wins and four losses.  Their opponents, the New York Giants, have been eliminated as a playoff contender and have nothing left to play for.

But neither did the Chicago Bears or the Carolina Panthers, who today may be one of the five best teams in football. For the Vikings the stakes Sunday are monumental. If they lose to the Giants they may be blown out of the first round bye they have been craving since they clinched a place in the playoffs. It seemed inevitable a few weeks ago when they stood 10 wins and 1 defeat. Today they are 11 and 4. If they drop to 11 and 5 they could be playing on the road, eventually in some place where it snows, like Philadelphia.

Addressing reporters after the game, Childress sounded at times feisty and provocative in his exchange with reporters — not all from Minnesota — who might have rattled his chain in their previous sparring. But the defeat obviously jarred him, especially coming in the wake of his spat with Favre and the snickers over who’s running the team, the self-absorbed quarterback hero or the bearded coach with his clipboard and his professorial language. The drum rolls from Childress’ critics among the Viking fans are clearly now revved up with the coincidence of his team’s losing slump coming just weeks after the club ownership extended his contract.

After the game Favre expressed his admiration for the Vikings’ second half comeback. “They gave it everything they’ve got…we were able to do some things in the second half, when we had a chance to spread them out and use a second option.”

But mostly it was Favre, working against the depleted and exposed Bear secondary, finding holes in the zone, delivering bullseye throws, hitting 20 of 29 passes in the second half for 269 yards while Peterson ran for 66 yards and two touchdowns.

But in the moments after the game ended, Peterson seemed beyond consoling. He stared motionless at the scoreboard. He had run recklessly and brilliantly when he found something open, and also when he didn’t. Yet in the crucial moment of the game, with the Vikings underway on what might have been the winning drive, he ran into a gang tackle, struggled to stay on his feet and Hillenmeyer punched the ball out of his arm. The Bears recovered and won the game a minute later. It was his seventh fumble of the season, six of them recovered by the opponents.

That’s the demon for this remarkable young football player, the will to extract every ounce and inch of effort out of his stores of energy and strength. But it’s not the kind of season he’d foreseen. He is not the heart of the Viking offense today. The timeless quarterback who drove the team into the playoffs is now the core of the offense.

Brett and Brad
But the season isn’t finished. Nor are Peterson’s goals diminished. He still wants to be known as the best football player in the world.

We will undoubtedly hear from Adrian Peterson in January. But the major parallel story of the next few weeks, elevated there by competing national media, will be a reprise of the Brett and Brad tap dance. It may have been forecast by a passage in a book published this fall, “Always on Sunday” by the MinnPost pro football writer.

“Childress is genuinely a man of values,” it noted a few days after Childress brought Favre to the Vikings. “Ultimately he is accountable for what happens to his team. But until the arrival of Brett Favre, it WAS Childress’ team. For all practical purposes in 2009, it’s Favre’s team in the heads of most of the fans, never mind that the Vikings under Childress and with Adrian Peterson won 10 games and the division title last year with mediocrity at quarterback. It will become the coach’s team again if it loses more than expected.”

Call it life. The next two or three or four weeks may be unpredictable. But they’re not going to be dull.