It’s been a difficult few weeks for the Schmidgall family of Edina, at a time that should have been joyous.

Tuesday night in Boston, Jenny Schmidgall Potter and the rest of the gold-medal winning 1998 women’s Olympic Team were inducted into the U.S. Hockey Hall of Fame. Potter did not attend the ceremony because she is still playing for Team USA. By the end of the month, she is expected to be named to her fourth Olympic team, along with fellow inductee Angela Ruggiero, as they pursue another gold at the 2010 Games in Vancouver.

But two of Potter’s loved ones will not be there to root her on. On Nov. 9, Potter’s grandmother, Millicent Schmidgall, died at age 89. Then on Nov. 20, Potter lost her mother, Terri Schmidgall, to a rare form of cancer. Terri was 57.

Terri’s passing was sudden and unexpected, according to Penny Rice, her sister-in-law. Terri suffered from metastatic intraocular melanoma, a rare but curable cancer of the eye that can spread to other organs. Originally diagnosed and treated in 1998, Terri lost vision in one eye but otherwise came out of it OK, Rice said.

She appeared to be in remission until last year, when Terri complained of stomach pain, and doctors discovered the cancer had returned. Terri began treatment again, Rice said, while continuing to work as a housekeeper at Methodist Hospital in St. Louis Park. 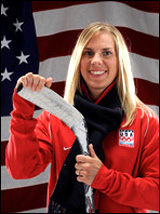 When USA Hockey chose Potter for Olympic team training camp in late August, all but assuring her a roster spot in Vancouver, the family went ahead and bought tickets for the Games, with Terri included in the traveling party. But the cancer had begun to spread. In early November, Terri’s condition worsened and she was hospitalized.

“She was doing well, and we were really hopeful,” Rice said. “Then her liver started to fail. After that happened, it didn’t take very long.

“They didn’t hold out a lot of hope that they would cure her, but they didn’t expect it to take her so soon. They thought she would live into at least next year.”

Terri’s health insurance did not cover all her treatments, leaving her husband, Dwayne, with medical bills that Rice said are still coming in. So Sunday, the family is holding a benefit spaghetti dinner and silent auction at American Legion Post 580 in Chanhassen from 4 to 8 p.m. Tickets are $15 at the door, and Rice said the family is hoping to raise $50,000.

Many of Potter’s Olympic and Minnesota Whitecaps teammates are expected to attend. Rice said the silent auction items include a Minnesota Vikings jacket autographed by Adrian Peterson, and a Cal Clutterbuck Minnesota Wild jersey. Sadly, the fundraiser was scheduled before Terri died; now it will be a memorial as well.

“She was the sweetest person, just lovely,” Rice said. “She just touched so many people. She was amazing, a wonderful mom. And she was quite a fighter.”

Without Terri, the family faces another difficult decision – what to do with the Olympic hockey tickets purchased for her. (Olympic athletes don’t get freebies; if you want relatives to watch you, they have to buy tickets like everyone else.) Rice said the family is discussing whether to distribute Terri’s tickets to other relatives, sell them to strangers, or keep them and leave one seat vacant at each game in Terri’s memory.

Meanwhile, the Olympic team with Potter continues its run-up to the Games. Saturday it faces the Hopkins High boys’ team at the Pavilion in Hopkins, with a 7 p.m. start. Advance tickets are $10 for adults and $5 for students, available at the high school athletic office, Decoy’s Grill and Bar in Hopkins, and General Sports in Edina. At the door, tickets are $12 and $7. Admission includes two JV games that begin at 2 p.m. A 5:30 p.m. autograph session features four Minnesotans — Potter, Angie Keseley of St. Louis Park, and University of Minnesota products Rachael Drazan and Gigi Marvin.

The Olympic Team’s Qwest Tour continues this month with games against Team Canada on Dec. 12 in Denver and Dec. 30 at the Xcel Energy Center in St. Paul. Though the U.S. is the two-time defending world champion, Canada has won two of its last three games, the latest 5-1 in the Four Nations Cup championship in Finland on Nov. 7. The Xcel game will be the last time the U.S. and Canada teams meet before the Olympics.

Sometime before Christmas, Coach Mark Johnson is expected to cut two skaters to reach his Olympic roster limit of 21 players.