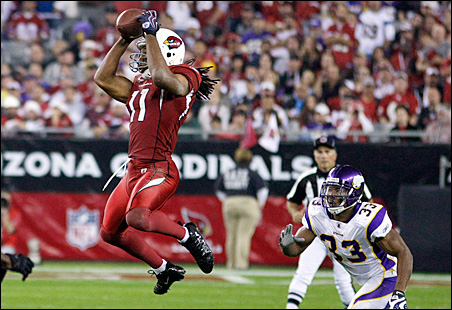 A week ago Kurt Warner walked through the Arizona Cardinals’ locker room feeling estranged, a man treading through an alien world. Not many of his teammates or coaches acknowledged him, this battle-starred 38-year-old quarterback who had taken them to the Super Bowl the year before.

Sunday night they hugged him. It wasn’t the celebration the Minnesota Vikings had planned after winning 10 games had transformed them into a national media sensation.  In fact, for the Vikings the night had all of the festivity of a sock in the gut, made more stressful by the sight of the popular and much admired leader of the Viking linebacking corps, E.J. Henderson, being carted off the field with a broken femur bone in his leg.

So there was more to rue than the 30-17 loss, although it’s not likely to seriously impede their drive to the NFL playoffs, whatever the outcome of their game next Sunday with talented Cincinnati. There was the sight of Adrian Peterson discovering a defense that was actually interested in tackling him and capable of doing it; there was Brett Favre rediscovering the real world of sacks and interceptions; and then the loss of Henderson, who because of his play-calling experience and leadership cannot be adequately replaced.

But for a national audience, more compelling than the Viking gropings was the return of Arizona’s Kurt Warner to his team and his public after an awkward one-week leave of absence caused by a concussion he suffered in a game two weeks ago. It became part of a growing controversy centered on mounting evidence that football concussions can lead to ultimate forms of dementia. Warner did not play last week after experiencing headaches and dizziness following a blow to the head in a game in November.

Macho codes
Warner is a Super Bowl winner, a thoughtful man with hundreds of friends in the game. But before he played Sunday night he told an NBC interviewer candidly about the pressures and dilemmas facing a football player today, wanting to observe the macho codes and camaraderie of playing through injuries, but worried also about his future health. He spoke of feeling discomfort as an outsider in street clothes walking through his team’s dressing room a week ago, suddenly a stranger.

But Sunday night he was back running the offense for the Cardinals, revealing no symptoms of his head injury, and with him were the whippet receivers, Anquan Boldin and Minnesota’s own Larry Fitzgerald. In front of them the Arizona offensive line controlled the Viking rushers and blitzers after the Vikings scored an early touchdown on Favre’s three-yard pass to Visanthe Shiancoe. Thereafter the Arizona defensive schemes choked off the Vikings’ ground game, inducing rising scowls of frustration on the field and sidelines from Peterson, who finished with an embarrassing 19 yards in 13 carries.

Arizona tied the score at 7-7 after Steve Breaston brought a punt back 64 yards and Warner passed two yards to Boldin. From there, with the Viking ground attack posing no hazard to the Cardinals, Favre struggled with the Arizona coverages and Boldin scored again from 39 yards out on a pass from Warner. The Vikings’ Ryan Longwell kicked a field goal to reduce the Arizona lead to 14-10 but Fitzgerald eluded the Vikings’ Madieu Williams on a 34-yard touchdown pass from Warner to make it 21-10 at the half. And the Vikings didn’t mount a serious threat thereafter.

It should have been clear that Favre’s season-long run of virtually error-free performance — remarkable by any quarterback let alone a 40-year-old man dealing with the wear and tear of 19 seasons in the NFL jungle — was not going on forever. He was intercepted twice, ending an uncanny stretch in which he threw 24 touchdown passes and had only three interceptions in 11 games.

When it was over Favre revealed, perhaps unintentionally, a different take on why the Vikings lost.

In the post-mortems after the game, Coach Brad Childress said he thought the Vikings were, among other things, “out-tempoed” by Arizona. Translated, the Cardinals played with greater urgency than the Vikings and wanted it more.

Childress long ago resigned himself to being a suspected undercover academic in the jock business. He’s not going to change. Why should he? In the last two years his teams have won 20 games and lost eight, made it to the playoffs one year and will again this year. He also knows that for all the improvements he’s made in Minnesota Viking football in the last four years — acquiring talent, building a genuine brotherhood on the team — he’s going to be raked by bloggers when the Vikings lose, because this is what bloggers do when anybody loses.

Wisdom from a warhorse
It’s altogether possible that that the Cardinals were better prepared than the Vikings. It’s the normal charge when one team wins and the other loses. Favre himself acknowledged that the Cardinals were playing with their backs against the wall in the playoff chase in which another defeat at home might have pulled the plug for them.

Favre is a warhorse. He knows that football teams will play with one kind of incentive when the post-season games are all but in the sack. They will play with another when they are on the verge of blowing thousands of dollars that come with the playoff.

But whether he heard some post-game coaching talk in the Viking dressing room about being “out-tempoed” or the word just occurred to him, Favre didn’t give that theory many style points. He admitted making bad decisions with the ball.

“I don’t believe we were ‘out-tempoed,'” he said. “I think we were outplayed. That’s a good football team. We needed to get our ground game going better. Sometimes they were rushing three and dropping eight into the pass coverage.”

And strategically or algebraically, it’s tough to hit Sidney Rice with eight defenders in the pattern.

Favre was assessing no blame. Why should he? The team had just finished two months of almost perfect football. It has created a football mania probably unsurpassed in the Vikings’ nearly 50-year history. What interested him earlier in the day was debunking the airhead suspicion by one of the internet oracles that his arrival in Minnesota would create a “schism” in the Viking locker room, a choose-up-sides division among the players.

Favre told his network interviewers that he never before had been accused of perpetrating a schism. Moreover, he didn’t seem to know anybody else who had inflicted a schism. “It floored me,” he said. “I finally figured out what it meant when I was doing a crossword puzzle and the letters seemed to fit.”

Which naturally led to another question about his plans for 2010. Would he retire at the end of 2009 or would he continue earning his $12 million? Or the heavens forbid, is he undecided?

Favre was forthright. Whatever he decides, he wants no part of provoking a schism.

A father’s smile
But when you caught a glimpse of Larry Fitzgerald Sr. on the television last night, you had to feel a bolt of joy in spite of all of the Vikings’ bumblings. Larry Sr. is the father of the Pro Bowl Cardinal receiver, Larry Fitzgerald, who went to school in Minneapolis, starred as a high schooler, was a ball boy with the Vikings, then became an All-American at the University of Pittsburgh and now is one of the three or four best receivers in the NFL, possibly the best.

The elder Larry was in Arizona to cover the game as a writer for the Minnesota Spokesman-Recorder and for radio, meaning he had to maintain an outwardly neutral approach as a viewer.

“But you smiled when Larry Fitzgerald scored for the Cardinals.”

Silence, but no denial. Finally, “he’s a good football player and a good human being.”

I said I thought he was pretty great.

No denial there, either.

There’s something to remember: Larry Fitzgerald, Kurt Warner, Brett Favre and Adrian Peterson may meet again in the playoffs. If so, how about a adding a crash course for the Vikings at Orchestra Hall. Call it Tempo 2. Brad Childress will conduct.