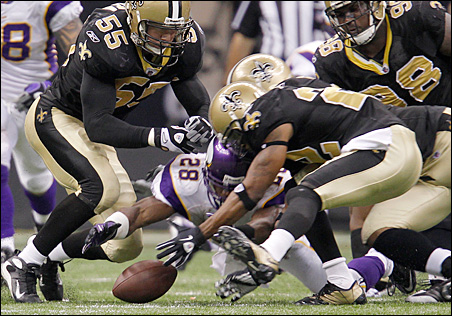 They threw one of the biggest blowouts in the history of New Orleans Sunday night, celebrating into the morning sun and dancing on the ashes of one more flameout by the Minnesota Vikings in their futile pursuit of Super Bowl glory.

The Vikings loss in the National Football Conference finals wasn’t a classic pratfall. It went into overtime before the Vikings lost 31-28 in a chaotic and brutal game in which the Vikings gained 475 yards to 275 for New Orleans and hogged possession. But they fumbled six times, surrendered the ball five times on fumbles and interceptions and somehow defied all odds by losing late in the game at a time when it seemed almost impossible for them to avoid winning

All of which thrust the New Orleans Saints into the NFL’s Super Bowl in Miami Feb. 7 against the Indianapolis Colts, their first Super Bowl ever after 43 years of sad- sack ignominy and ridicule. And most of the nation, remembering Katrina, celebrated with them. If the game was messy, it was also charged with suspense and the shifts of luck, blunders and savage play on the line of scrimmage. For the roaring Superdome crowd and the television millions it was also full of bewilderment. Nothing was predictable. It presented a wounded Brett Favre playing heroically and then, in a climactic moment, rashly and unwisely.

And it raised some towering questions over his availability to return next year, although people who know him best will tell you there is a high likelihood that he will at age 41. In meantime, nobody including Favre can or will tell you who is going to quarterback this team next season.

Does he foresee another beat-the-training-camp dodge into August? If not, how long will he want to make a decision?

“I wouldn’t say months,” he told reporters after the game. “I know people are rolling their eyes or will roll their eyes. I really don’t want to make a decision right now based on what’s happened, because I do know the year could not have gone better aside from us not going to Miami.”

When Favre talks this way he usually wells up, as he did Sunday night. He loves being a football player. He can’t stand being away. Trying to get back to the Super Bowl is a ruse. Playing football is a carnival ride for him, whatever his age. It lights him up.

After Sunday in New Orleans, he might have to get rid of the aftertaste because late in the brawling and the turnabouts, the Vikings had it within grasp, moving toward a winning field goal in the closing seconds.

Favre galvanized the team
How many times had a scenario like this played out? Behind Favre and the Vikings was a huge advantage in the flow of the game. They were tied 28-28, but the ball was in the hands of Brett Favre, who had dominated the 2009 season in his third-coming as an NFL quarterback at the age of 40. He had galvanized a Viking team looking for a quarterback to lift them over the hump. He’d been battered physically from the opening moments of the game, limping at times on a sprained ankle, sore all over. But he was still the charismatic superstar in his 19th season in the game, football’s story of the year.

The Vikings had reached the New Orleans 33. Trying to make a player change with time running down before a field goal attempt, they drew a 5-yard-penalty for having too many men in the huddle. They were back to the 38 and the ball was in Favre’s hands to get them closer.

How many times had he been there and won? Never mind that three years ago against the New York Giants he’d thrown an interception that blew the Green Bay Packers out of the Super Bowl and pretty much drove him into retirement. On Sunday he was moving his team toward a field goal that would have won the game in the fading moments. They were near the range limit of their kicker, Ryan Longwell. Another few yards would about clinch it.

Buying time, Favre rolled right and threw the ball across his body to Sidney Rice, his most dependable receiver. Favre and every quarterback alive has heard doomsday warnings about throwing across the body on the move. You can’t see all of the defenders. It’s high risk.

But Favre is Favre and he has earned a handsome living, a ton of football games and wide public adulation as a gambler and a winner. 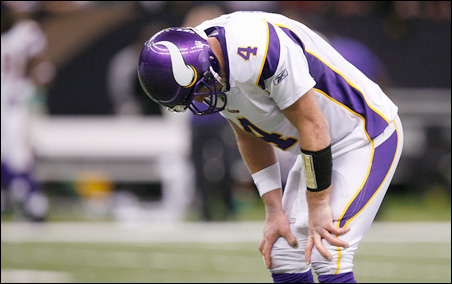 REUTERS/Sean Gardner
Vikings quarterback Brett Favre puts his head down during the fourth quarter of the NFC Championship game.

“I was late on the ball to Sidney,” he said after the game. He said he might have made a mistake in not running for a few extra yards to give Longwell a decent shot. He offered no excuses, injury or other, apart from the subliminal one that he’s a quarterback and he was trying to win the game.

The Saints cornerback, Tracy Porter, flashed in front of Rice, intercepted and the game stood 28-28 after regulation time. The Saints won the coin toss to receive in overtime, got a kickoff runback of 40 yards from Pierre Thomas and needed 25 yards to reach field goal range. Drew Brees, nothing remarkable during most of this game but the heart and guts of his team, hit two short passes. The Vikings’ Ben Leber was called for pass interference and the officials joined the expanding mess with two eye-of-the needle first down calls that kept the New Orleans drive moving. The Saints now were within field goal range.

The Ain’ts no more
And when Garrett Hartley kicked a 40 yard field goal to win the game, the Superdome shook with the deliverance of generations of Saints’ fans who had suffered through embarrassments and foolish hope for years. Glumly they wore brown paper bags on their heads and called their team the Ain’ts.

What they got Sunday was not playoff football at its gleaming best. It was angry men flailing at each other on the line of scrimmage. It was Adrian Peterson, fumbling again, twice, running almost maniacally at times. It was Peterson going over 100 yards, scoring three times, looking mortified after his fumbles, needing Favre’s earnest therapy on the bench, and going out to slash some more. It was Bernard Berrian, once the forgotten man of the Viking passing game, restored in New Orleans, making critical catches with Rice occupied with double teams.

That kind of game. For New Orleans the allegedly new Reggie Bush, a great college star at USC but fundamentally a feint-and-duck runner in the pros, had a few moments but was basically a feint-and-duck runner again. But the game early on had settled into a slugging match in which one of the small moral victories for the heavyweights on the line was just getting up from the scrimmage line without calling 9ll.

But when it was over the Viking score sheet over the last 40 years read like this: Four Super Bowls played and lost. Five conference championship games played since 1978, five lost.

In the large scheme, is this an embarrassment impossible to live if you’re a Viking fan?

Why should it? It is uncanny, though, when you think about it. Those losses include one game when the Vikings’ field goal kicker was 100 percent flawless during the season, and then missed a 38-yard tap that would have put them in the Super Bowl a fifth time.

If there was rage from the Viking millions watching the dismal finish on television and in bars, it was muted, more shock than anger.

“It was like a dagger,” admitted Tom Szarzynski, a Minneapolis technology dealer who watched the game in a Hennepin Avenue sports bar. “It was hard to believe Brett threw that ball when the Vikings were close to the winning field goal. It looked like he could have run a few more yards to set up the field goal that would have won. We were so close, again. I know this sounds a lot like sour grapes, but that overtime rule, the first team to score wins, is still lousy.”

And the team’s public? Dumbfounded, again.

Favre watch begins
For Brad Childress, on the verge of reaching the Super Bowl rainbow in his fourth season as coach, there will now be the usual braying from bloggers and the restless vigilantes among Childress’ critics. It had to be a blow to the gut. It had been a season marked by Favre’s remarkable year, and that of Percy Harvin, who played well again Sunday despite his migraine, both of them brought to the Vikings primarily by Childress’ intervention.

So the Favre watch begins again. He hates to retire because he knows he’s going to be miserable if he does. Favre does not take age seriously. That chronic indecision bucks up against the availability this year of $12 million more if he comes back under his two year contract. Childress’ response (and that of owner Zygi Wilf) is to give Favre all the time he needs. “I told him to ‘go home and lick your wounds and I’ll do the same and we”ll catch up down the road'”

There’s one other thing to remember about the Favre Era, brief as it might be in Minnesota. It launched the team on a remarkable odyssey that stirred fans by the millions, unlike any phenomenon in the Vikings nearly 50 year history. The loose camaraderie he brought to the team was real and deeper than the typical locker room roughhousing. Although Favre has a well-advertised need for self-fulfillment, he knows team play and fosters it with his energy, his playground wackiness and his commitment to sacrifice as part of winning. It ignited a Viking fervor around the state unequaled in the team’s history here. The perfect mating of football with television in today’s high tech environment is part of the reason. Favre was another. Losing in New Orleans isn’t going to change that.

The saga that has no end: Vikings lose again