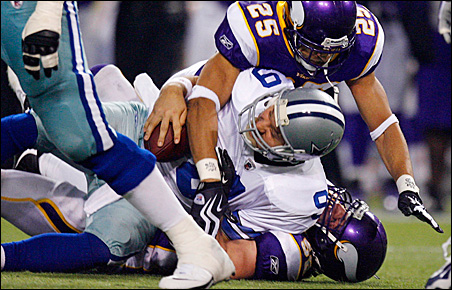 There’s a new firm on the marquees of the National Football League today. It’s incorporated as Allen, Edwards, Williams and Williams, in partnership with Leber and Greenway, doing business as the Minnesota Vikings frontline defense. It doesn’t deal in securities. Its specialties are ambush and intimidation.

In three uproarious hours at the Metrodome in Minneapolis Sunday, the firm destroyed the Dallas Cowboys offense. It opened the gates to four touchdown passes by the bigger-than-life, older-than-life Brett Favre, and stamped the Vikings ticket to New Orleans and a conference title game this Sunday. The winner goes, well, to the Super Bowl in Miami Feb. 7. If you’re in Minnesota, you can say it without blinking.

The score of 34-3 may not have accurately reflected the light-years distance between the teams’ performance. From the opening minutes when the Cowboy offense gained impressively on the ground, the Viking pass rush took control of the action, sacking Tony Romo an eventual six times, forcing him into two fumbles and an interception and something close to shell-shock at the finish.

By then Favre and his battery mates had stormed the gates. Three of those touchdown throws went to Sidney Rice, tying an NFL playoff record and elevating the smooth-striding 23-year-old even higher into the elite of the league’s receivers. The final touchdown pass to Visanthe Shiancoe in the late-game garbage time was unnecessary. The clock was winding down. The game was all but over. The veteran Cowboy linebacker Keith Brooking was infuriated, calling it classless to everybody in sight, including Coach Brad Childress. Not surprisingly, nobody in the Viking clan agreed. But it’s one that Favre may have considered a wry remembrance for the three playoff games he lost to the Cowboys when he wore Packer green.

New Orleans and Clint Eastwood
All of which created a match-up in Louisiana this weekend that Clint Eastwood would cheerfully choreograph. Here are the Vikings, bringing to New Orleans the story of the year in professional football, Brett Favre the millionaire football vagabond, playing some of the best football of his life at the age of 40, leading a team of bonding veterans into the Big Easy. They will be coming to a city not far from where Favre grew up in Mississippi, to a Superdome site of his solitary victory in the Super Bowl — a goal he insists motivated him to scrub his latest retirement.

But in the eyes of millions of otherwise neutral football watchers around the country he will also be coming as the scripted heartbreaker of the piece.

This is New Orleans, still struggling with the aftermath of Katrina. And here are the New Orleans Saints, suddenly the emotional pulse of the city, a football team closer to a flying circus. It will match its Drew Brees against Favre, its Reggie Bush against Adrian Peterson and, on the coaching lines, its Sean Payton and his energy and inventiveness against Brad Childress’ schematics and the level-headed direction he has given his team.

If Favre and the Vikings win, they plunge the city into mourning. If New Orleans wins, it’s Mardi Gras three weeks ahead of time and the deep freeze comes back to Minnesota.

One way or another, life isn’t going to be fair for part of the country — but it’s better than Leno and O’Brien for two more weeks. Right now the Vikings-Saints is the game of the year and the winner will go to the Super Bowl to meet either Peyton Manning and the Indianapolis Colts or the New York Jets, the remarkable upset winner over the San Diego Chargers Sunday. 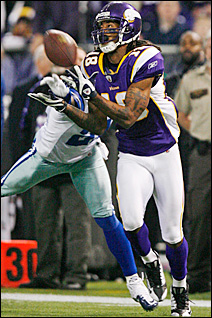 The Vikings runaway victory over Dallas created a scene of frenzy and redemption that the Metrodome thousands and a few million others around the state of Minnesota were scarcely able to absorb in one gulp. This is a part of the country nursing more than 40 years of depression in pursuit of pro footballs’ Big Casino, a victory in the Super Bowl. The ghosts of failed attempts and near misses fill the historical record and bruised psyches of the struggling Viking believers: four losses in the Super Bowl. Add three more defeats at the brink of it.

But they aren’t struggling today. There was Favre Sunday, zesty, confident and impetuous, a great intuitive football player winging it without caution or fear, pumping his team with the juice of belief and the craft of the possible. For all of the slapstick of his arrival five months ago, he was from the beginning with the Vikings a leader who plays like a man fully expecting miracles and able to produce a few on his own. Sunday he wore it all. He was not so much rejuvenated but — borrowing from the creative words of Bud Grant — playing as though he never felt “unjuvenated.”

For a few minutes the Cowboys ran hard and with some success. But the Viking defensive front four of Ray Edwards, Jared Allen, Kevin and Pat Williams solved the run and hounded Romo when he tried to throw. With their linebacker accomplices, Ben Leber and Chad Greenway, they strangled his passing game when it counted and drove the Dallas offense into a futile mess. It didn’t help the Cowboys when Flozell Adams, their all-pro offensive tackle, went out early. It meant leaving tight end Jason Witten, one of Romo’s pass catching favorites, to deal part of the time with the gung ho rushes of Allen and Edwards.

Camaraderie and gratitude
In the aftermath of Sunday’s game at the Metrodome, the Vikings spoke the expected words of camaraderie and gratitude for reaching one more milestone that seemed so improbable not only four months ago but as recently as December. The Vikings had lost three games out of four on the road and were a widely predicted candidate for an early playoff fadeout. They clearly resented the talk but didn’t especially wail about it, except for Allen, the long-haired wrangler, who railed two weeks ago to the Sporting News when somebody asked him why the Vikings didn’t play in December the way they did in beating the New York Giants in the last game of the season.

“We never doubt ourselves,” he’d said then. “Things go wrong sometimes. This is the NFL. Other teams get paid, too. It’s the media that gets things stirred up. Our main focus is to have fun together, go play and forget what everybody says, and show them what kind of team we are and shut some outside people up and remind ourselves it’s not about what [they] say. It’s about what we do.”

One of the things Allen did Sunday was to absorb another swat on the butt from Favre in the post game frivolity, in which Favre and Allen are invariably the ringleaders and Sunday featured another chorus of the “American Idol” takeoff “Pants On the Ground.”

Less noisy in the aftermath was Sidney Rice, a thoughtful young man who has become the unheralded star of the season for the Vikings as well as the NFL. His first touchdown catch, of 47 yards, came on one of Favre’ breathtaking mile-high deep throws that reached Rice in stride near the goal line with the covering safety, Gerald Sensabaugh, running side by side but apparently clueless that the ball had come down. On another play Rice slow-blocked at the line of scrimmage, then got up and romped unmolested toward the goal line, where Favre found him for six more.

In the meantime Romo was increasingly flummoxed by the Viking rush. He was sacked three times by Edwards and oddly threw a perfect sideline pass to Ben Leber, who happened to be wearing Viking purple. In the midst of all of this the Cowboys tried two long-range field goals from the troubled kicker, Shaun Suisham, and in general were disorganized by the third quarter. No serious ground game was necessary from the Vikings Adrian Peterson and the pass rush pretty much immobilized Romo, often forcing him to run wherever Edwards and Allen weren’t.

For Favre at the end, more records, more the reflective Favre. “I enjoyed every minute. It was electric…everything I expected…and now going back to New Orleans…”

And then maybe Miami.

Tasmanian Devils
For Childress, the game cleared a huge hurdle in a four-year marathon to reach the high ground of pro football, one not filled with much adoration from the fans. But in this his biggest game as the Viking head coach, he was empathically in charge as the strategist and clinician in the Vikings’ game preparation from the run-up bye week of the playoffs. He admitted getting ticked by the avalanche of news stories picturing the Cowboys as the hot stuff in the playoffs, America’s Team ripe for the Super Bowl.

“I asked my team early in the week to choke it back and shut up,” he said. “We will play the game when we get here on Sunday.” He said the hype gave him the impression of “Tasmanian Devils coming from Dallas…about to bombard the state of Minnesota and run through us like Sherman through the South. All of us felt it quite palpably.”

From Wade Philips, the embattled Cowboy coach, there were no alibis or equivocations.

“They outplayed us on both sides of the ball,” he said. “They made the plays. We knew we had to get to Favre. But he fought through it. He was the story. And we couldn’t get anything going. It’s like the elevator falling from the top. It’s tough when it’s over. If you don’t win it all, you have not reached your goal.”

From Tony Romo, also no alibis. “Give them credit. They came with a lot pressure. They’re a good team.”

In New Orleans, nobody is talking devils. They wouldn’t mind, though, being America’s Newest Team. For the time being the Vikings will settle for Minnesota’s Team, which right now is a handful for anybody.