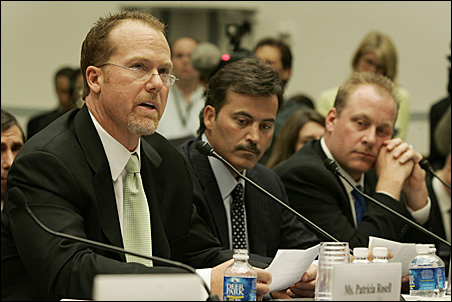 Voting shall be based upon the player’s record, playing ability, integrity, sportsmanship, character and contributions to the team(s) on which the player played.

— From the rules for election to the Baseball Hall of Fame

Now that Mark McGwire finally admitted last week what most of us suspected — that he used steroids and human growth hormone in the most productive slugging years of his career — it’s time to talk about the past, the future, and something that matters as much to this Hall of Fame voter as any set of statistics.

The third, fourth and fifth criteria in the Hall election rules — integrity, sportsmanship and character — are often overlooked in too many formula-based discussions of who belongs in the Hall. But integrity counts for me. That’s why I’ve voted for Andre Dawson since my first Hall vote in 1999; why I checked the names of Barry Larkin and Tim Raines, among others, this year; and why, barring a compelling argument otherwise, McGwire and the rest of the steroid cheats will never get my vote.

Hall enshrinement is not a right. It’s a privilege reserved for the best of the best, in achievement and character. It resonates with me when Hall members like Jim Rice and Goose Gossage say steroid users don’t belong, when Ryne Sandberg comes out against former Cubs teammate Sammy Sosa’s possible enshrinement, and when Hank Aaron predicts some Hall of Famers will walk off the Cooperstown stage in protest the first time a steroid user is enshrined.

That’s not a unanimous feeling. Willie McCovey told the Associated Press he would vote for McGwire, if he had one, because his record chase did so much for baseball. And last February, Mike Schmidt — who in 2005 told Bob Costas on HBO that he would have taken steroids himself had they been available when he played — said he would welcome admitted juicer Alex Rodriguez in the Hall if the writers voted him in.

Certainly, it’s a tough issue that reasonable minds can debate. The answer for me is easy: Bar the cheats. And that includes Pete Rose for betting on baseball. We can’t pretend they never played; baseball will never expunge their records. However, we can deny them the highest honor.

But if integrity matters, you can’t just use it to keep players out. It has to be applied to allow players in, especially those with credentials that some voters consider borderline. That’s why Dawson deserves to be in, and Larkin and Raines, too.

The statistical arguments against Dawson are fair. He only had one dominant season (his 1987 MVP year with Cubs), he rarely led the league in anything, had only four 100-RBI seasons and a .323 career on-base percentage, and fell 62 home runs of 500 in his career. But the numbers don’t reflect Dawson’s stature as a leader, the example he set on the field, and the respect that opposing players had for him.

I covered Dawson near the end of his career, in Boston in 1993 and ’94, when his knees were shot and he was primarily a designated hitter. I had seen plenty of Dawson on television in his Montreal Expos heyday — the speed, the cannon arm, the remarkably quick bat. But several images from Dawson’s first spring training with the Red Sox left an indelible impression that made voting for him an automatic.

Raines credits Dawson for helping him overcome his cocaine addiction when they played for the Expos in the early 1980s. They grew so close after Raines emerged from rehab that Raines named his son Andre after Dawson. So Raines was a natural person to seek out while reporting a Sunday feature on Dawson for the Portland Press Herald.

When I approached Raines in the White Sox clubhouse in Sarasota, he had just finished a table tennis game with his two sons. He seemed indifferent until I told him I was writing about Dawson. Then his expression changed. “How much time you got?” he said, offering a chair. Half an hour later, Raines was still talking.

That was the spring Dawson nearly impaled himself on a chain-link fence running full speed for a foul ball during an exhibition game. For a franchise whose players often jogged to first on ground balls, it was a remarkable moment that sent an important message to the kids in the dugout: If Granddaddy Hawk can bust it on arthritic knees in a game that doesn’t count, I’d better, too. Dawson and another veteran, Billy Hatcher, greatly influenced one kid who lockered near them, a first baseman named Mo Vaughn, the American League MVP two years later.

I saw more of Raines later in the 1990s, covering him with the Yankees for the Newark Star-Ledger. Like Dawson in Boston, Raines’ best years were behind him. But his savvy and bubbly personality rubbed off on the talented kid a couple of lockers away, Derek Jeter, now the Yankee captain. Raines’ statistical achievements get him to the door of the Hall — 808 stolen bases (fourth all-time), an .847 success rate (second), 2,605 hits and seven All-Star selections — and his leadership swings it open.

Since I mainly covered American League teams, I did not see much of Larkin, who captained the Reds from 1997 until his retirement in 2004. Larkin’s achievements stand out — 12 All-Star selections, nine Silver Slugger Awards, three Gold Gloves, one MVP, and more career walks (939) than strikeouts (817). But teammates and opponents praised his leadership and presence. That’s important.

And as we sift through the aftermath of the steroids era, those of us who spent so much time around major league clubhouses and batting cages need to use our eyes and ears as well as our Baseball Almanacs when our Hall ballots arrive. More than ever, integrity and character matter. The Hall is a better place with people like Dawson, Raines and Larkin in it, and the cheats out.