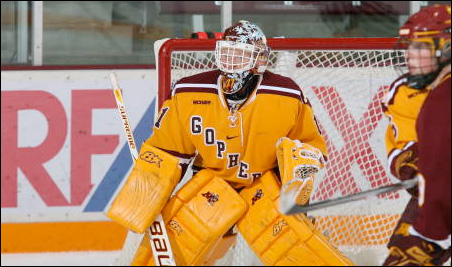 Courtesy of University of Minnesota
Coach Brad Frost says of Noora Raty: “She hates getting scored on. And she never, ever gives up on a play. Ever.”

A tunnel connects Ridder and Mariucci Arenas at the University of Minnesota, mainly so the Zamboni can go back and forth between the hockey rinks without tangling up campus traffic. The tunnel entrance at Ridder is where players were brought for postgame press conferences earlier this month, following the U.S. women’s Olympic team’s 8-5 victory over the Gophers in an exhibition game.

Minnesota’s spectacular Finnish goalie, freshman Noora Raty, arrived at the tunnel looking, well, cranky. Part of it was jet lag. Raty flew back a day-and-a half earlier from Germany, where she played for Team Finland in an international tournament. Raty has been the Finns’ top goalie since 2006, when she started at the Turin Olympics as a 15-year-old.

And part of it — probably most of it — was personal disgust.

Team USA rarely loses to anyone except Canada in international play, but Raty has beaten them twice for Team Finland — 1-0 in overtime at the 2008 world championships and 3-2 in the opening game of the Hockey Canada Cup in Vancouver last Aug. 31. Finland took bronze in both events.

This night, however, Team USA came out flying and used Raty for target practice. Raty faced 33 shots in just under 28 minutes, and though she made at least half-a-dozen acrobatic saves, Coach Brad Frost mercifully pulled her with Team USA leading, 4-2. The Gophers rallied to tie the game, 4-4, going to third period, which didn’t make Raty feel any better.

“She was not happy with her play,” Frost said before a Gophers practice Wednesday. “I mean, isn’t that something? Some of the saves that she made were like, how does that stay out of the net? Not to make excuses for her, because she never would, but she was half asleep, too.”

‘I knew she was good’
In her next four games for the Gophers, a determined Raty allowed two goals. Two. Back-to-back shutouts against North Dakota last weekend gave Raty seven for the season, one short of Jody Horak’s school record, and earned Raty her fourth Western Collegiate Hockey Association defensive player of the week award. Raty’s 0.80 goals against average and .967 save percentage are the best in the nation, and her .800 winning percentage (14-2-4) ranks third.

“She’s world class,” Frost said. “I knew she was good. I didn’t know she was as good as she’s playing right now.”

Today, however, Raty will leave the second-ranked Gophers (19-3-4 overall) for about a month to join Finland’s Olympic Team for the Games in Vancouver. Raty said Finland’s goal is an Olympic medal — “Bronze, or something better” — and that’s realistic if she plays well. Finland took bronze at the last two world championships.

“I was so young,” Raty said of 2006. “Everything was so new for me. I was more than a tourist that a player. I almost forgot to play there, it was so big. Now I just want to win the games and give my best there.”

The U.S. team will see plenty more of Raty before and during the Games. Finland is scheduled to face the United States twice before Vancouver, Feb. 4 and 6 in Colorado Springs, Col. And the Finns are in Olympic Group B with the United States, China and Russia; they meet the U.S. in pool play Feb. 18. Group A features Canada, Sweden, Slovakia and Switzerland. The top two teams in each group advance to the medal round.

“I don’t know her that well, but she has played extremely well for them this season,” said Team USA defenseman Angela Ruggiero, the four-time Olympian. “Anytime you have a great goalie like that, if they can just keep their team in the game long enough for them to get a lucky bounce or score a goal somehow, the momentum will shift.

“She could be a difference-maker. We’ve seen that clearly in all the teams that we play, when you have goalie like Kim Martin in the last Olympics [who stopped 37 shots in Sweden’s 3-2 semifinal upset of the U.S.] You get a goalie that’s hot, they can keep their team in the game long enough so the momentum shifts in their favor. With her, we’ve just got to score early.”

Won the job
It’s not like Raty has lacked for work as a Gopher. Raty chose Minnesota over Ohio State and Minnesota-Duluth even though Frost already had two good goalies in Alyssa Grogan and Jenny Lura. Raty initiated the first contact from her friendship with former Gophers captain Bobbi Ross. And Frost, fearing Raty might beat the Gophers for an NCAA title in another sweater — especially Duluth’s — did not dare turn her away.

“If Wayne Gretzky came knocking on a coach’s door and said, ‘I want to play,’ I don’t think you’d say, ‘Well, we have too many centers right now so you’ll have to go to our competitor,'” Frost said. “And that’s kind of the philosophy I took.”

And Raty was up for the challenge of winning a job.

“Before I came here, Coach Frost said to me you have to compete,” she said. “I was ready for that, because I had never before had to compete.”

Frost expected to use two goalies until late in the season, but Raty was so good he changed his mind. Grogan has played seven games with six starts, and Lura has been on ice for parts of two games. “Noora emerged earlier than I thought she would, and we’ve continued to roll with her,” Frost said.

“Obviously she’s very sound technically. She’s very quick. She challenges appropriately. The thing that separates her is her mind. She’s very competitive. She hates getting scored on. And she never, ever gives up on a play. Ever.

“I can’t tell you how many times in practice she’ll make a save, the rebound goes right to a kid on the backdoor. It’s normally an easy tap-in, and all of a sudden she comes flying back with her stick, or some other form of equipment, to stop the puck. That’s the biggest thing with her — she’s very intense, and focused. I don’t remember a goal that she’s let in where I’ve thought, man, she should have had that.”

Raty expects to be back for the first round of the WCHA Tournament Feb. 26-28. She will miss four series, including a rematch with Wisconsin. The Badgers, even with Coach Mark Johnson and top scorer Hilary Knight gone for the Olympic year, handed the Gophers their only two WCHA losses.

Grogan or Lura could play well enough to make Frost’s postseason goalie decision difficult. Certainly, both are capable. But Raty would have to come back from Vancouver exhausted, or in a body cast, to not regain her job. Remember, the Gophers host the NCAA women’s Frozen Four at Ridder, and they do not wish to be spectators.

For now, though, Raty has Vancouver in her sights. The team to beat? Top-seeded Canada, not the two-time defending world champion United States.

For Finland, they are one in the same.