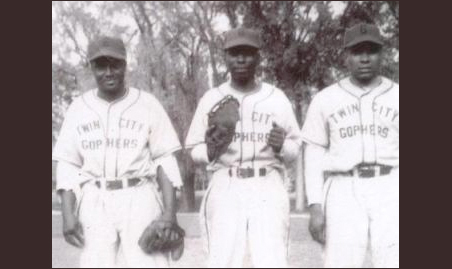 Some fathers never brag about themselves. Louis White, the father of St. Paul’s Frank White, was one of those dads. Something White learned about his father’s baseball career, surprising and wonderful, inspired him to learn more about the roots of black baseball in the Twin Cities.

Though the major Negro Leagues of the 20th century never had franchises in Minnesota, teams occasionally came through the state on barnstorming trips. Often, they enlisted local players to fill out their rosters. Louis White was one of those players, which Frank White said he learned from a family friend, not his father.

“My dad never told me anything about that,” Frank White said. “I asked him, ‘Why didn’t you say anything?’ He said, ‘No reason to.'”

Much of black baseball history is oral, especially here, as White found. He wondered how many other fathers played down their accomplishments, and what else might be lost to the passage of time. So while working with the City of Richfield recreation department and the Minnesota Twins’ R.B.I. youth baseball program, he began collecting stories, photos and artifacts.

White will share the results with the public at 6 p.m. Thursday at the Ramsey County Historical Society Gallery, in St. Paul’s Landmark Center. His exhibit, “They Played for the Love of the Game — Adding to the Legacy of Black Baseball in Minnesota,” highlights black players from the Twin Cities from the 1940s, 50s and 60s through the present. The program and exhibit, both free, will features talks by White and several contributors.

“I’m kind of nervous, but I’m excited at the same time,” White said.

Longtime basketball referee
White, 64, is not the Frank White who used to play second base for the Kansas City Royals. (They’ve met at Negro Leagues Baseball Museum functions in Kansas City, and the Royals’ White autographed a picture for his namesake.)

But he is the longtime basketball referee who was elected to the Minnesota State High School League Hall of Fame in 2005, and the grandfather of Royce White, the University of Minnesota basketball recruit who withdrew from school after two run-ins with the law. White offered no prediction about Royce’s future, except to say, “If it’s up to Grandpa, he’s going back to the U.”

White’s interest in local black baseball history also stems from the shocking discovery that some area children have no clue about even recent black players. White learned that from his work with R.B.I., short for Reviving Baseball in Inner Cities, a major league baseball-sponsored program to increase playing opportunities for urban kids.

“In St. Paul, the younger kids don’t know who Dave Winfield is,” White said. Winfield, the Hall of Famer from St. Paul, retired 15 years ago; White and Winfield’s brother Steve are pals from their undergraduate days at the University of Minnesota. “For kids that are 10 years old, 11 years old, David is just so removed,” White said.

The exhibit, which runs through August, features 20 panels of newspaper clippings, photos (some never published) and other artifacts.

White tried not to make it a singular homage to his father. “I’m trying to tell the untold story without involving my father too much, so it’s not self-serving,” he said. But some of White’s best stories are personal.

About eight years ago, after learning about his dad’s barnstorming, White attended an event at the Negro Leagues Museum and ran into Buck O’Neil, the museum chairman and iconic Negro Leagues star. O’Neil’s brilliant recall and storytelling made Ken Burns’ documentary “Baseball” so memorable. When White mentioned that his father might have played with or against O’Neil’s Kansas City Monarchs, White said O’Neil asked his father’s name.

He was. And before O’Neil died in 2006, White brought his father to the museum to see him. Louis White has since passed away.

Jackie Robinson
At the old Mechanic Arts High School in St. Paul, Frank White played baseball and basketball for Coach Howie Schultz, the former Minneapolis Laker and Brooklyn Dodger who played a minor role in the integration of baseball. The Dodgers sold Schultz, a 6-foot-6 first baseman, to Philadelphia in May 1947 after giving his job to Jackie Robinson. Schultz tutored Robinson, a middle infielder, at the position during spring training in Cuba.

Schultz died last October, but his son Skip relayed to White a story his father told about Robinson. Ben Chapman, Schultz’s manager with Philadelphia, opposed integration, and the Phillies heckled Robinson relentlessly. One day when Robinson reached first base, Schultz asked him how he could take the non-stop abuse. Robinson’s answer: “That’s OK. I’ll have my day.”

(Schultz told this story himself, virtually verbatim, to local author Stew Thornley in 2004 for a Society for American Baseball Research biography. Here’s a link.)

And White said he has much more to tell. “Through the exhibit, I’m bringing some other guys and their stories to life,” he said.

Black baseball in Minnesota: A son’s search for history