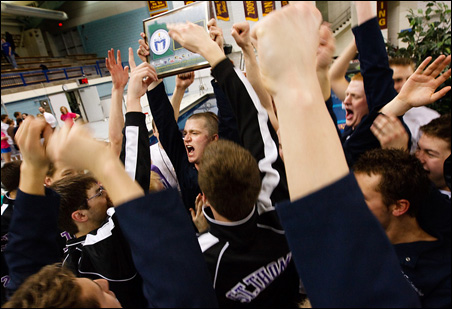 Pushed against a back wall at the McCarthy Gym pool rests a curiously shaped contraption that, as much as anything, represents what kind of oddly successful season this has been for the University of St. Thomas swim teams.

“We call it Frankenstein,” Coach Tom Hodgson said. “Take a closer look and you’ll understand why.”

It’s a homemade starting block, built of wood and nails, with a hook on the bottom to anchor it into one of the pool’s gutters. A metal rod through the back, fitted with grips on the ends, allows swimmer to pick it up and move it. Look at it a certain way and it resembles an Easter Island head with bolts in its neck. Hence, Frankenstein.

Hodgson had to built a starting block because the McCarthy pool does not have any. Before January, it never needed them. That’s when the Tommie men’s and women’s teams were kicked out of their quaint five-lane pool at O’Shaughnessy Hall, which is being demolished to make way for the $52 million Anderson Athletic and Recreation Complex. The move came two months early because construction proceeded faster than expected.

That forced the Tommies to rent pool time at nearby St. Catherine’s for some practices, and shift others to McCarthy, a recreation pool with turquoise walls that is often used for swimming lessons. Hodgson, besides jury-rigging a starting block, had to string backstroke flags (the pennants draped over the pool that signal backstrokers they are approaching the wall) between two volleyball net standards.

Strong freshman class
Of all seasons — and this is Hodgson’s 31st with the Tommies — this might be the least likely one for St. Thomas to win a Minnesota Intercollegiate Athletic Conference men’s swimming championship. But instead of a horror show, it’s been a monster. Buoyed by its strongest freshman class in decades, last Saturday the Tommie men edged Gustavus for the school’s first MIAC title since 1954, when Hodgson was 4 years old. The women finished third.

“It is remarkable we would have this kind of season, particularly this year,”  Hodgson said. “It was just hurdle after hurdle thrown up in front of us, and the kids kept finding a way to make it all happen.”

MIAC teams could see this coming. The championship capped a four-year climb that made the Tommie programs competitive with the Gusties, who have won seven of the last 11 MIAC men’s titles and three of four on the women’s side. 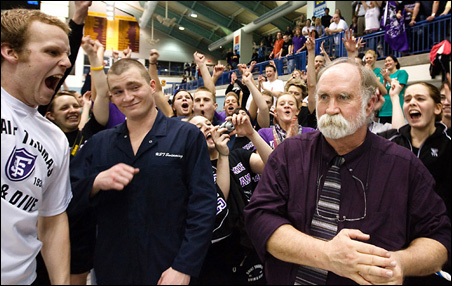 Mike Ekern/University of St. Thomas
St. Thomas swimmers and divers cheer for coach Tom Hodgson, right, as he is announced as the MIAC men’s swimming coach of the year.

Numbers helped; this year’s 66-person roster, men and women combined, is the largest Hodgson has ever had. And with it came talent and depth. Senior Peter Mullee of Madison, Wis., the MIAC men’s swimmer of the year who transferred from the University of Minnesota two years ago, won three individual events and swam on four winning relays at the three-day MIAC meet. Nine freshmen accounted for about half the team’s points. Becca Ney, a junior from Plymouth and the women’s swimmer of the year, also won three events.

Mullee, an accounting major, tabulated team scores in his head during a frenetic final session at the University of Minnesota Aquatic Center.

Gustavus, led by brothers Skylar and Whitaker Davis, swept the first four places in the first event, the 1,650-yard freestyle, to put the Gusties 73 points up on the Tommies. St. Thomas closed the gap by scoring at least 50 points in the next three events — the 200 backstroke (a Mullee victory), the 100 free (won by Tommies sophomore Eric Huls of Farmington) and the 200 breaststroke.

Going into last event, 2 points behind
Meanwhile, freshman divers Ryan Panure and Jeff Isaacson finished fourth and fifth and sophomore Dan Cedergren 12th in the three-meter springboard for 34 points. That left the Tommies two points behind going into the last event, the 400 free relay, with Mullee handling the opening leg.

“We said, we can win it if we swim lights out,” Mullee said.

They did. Mullee, whom Hodgson called “hands down, the best swimmer I’ve ever coached,” touched the wall with a lead of just over two seconds. Michael Hoelterhoff, Huls and Sam Rauchwater extended it, the Tommies winning in 3:03.40, more than four seconds ahead of St. Olaf. Gustavus finished fourth, giving St. Thomas the title, 709 points to 701.

And though the new pool at St. Thomas is months away from opening, the Tommies are already benefiting. Hoelterhoff and Rauchwater are two of the terrific freshmen lured by promise of the eight-lane pool and diving well, the modern facility Hodgson badly needed to attract top swimmers.

“Until recently, I haven’t put in the time to try and recruit 20 men and 20 women every year,” said Hodgson, 60.  “It’s not like I didn’t recruit. But when you have a pool that’s built in 1939, and it’s a five-lane pool, it’s tough to bring an elite swimmer into your building. You show them the pool, and it’s very difficult for them to come away feeling this is a really credible program. The facility is at least 50 years obsolete.”

Former U of M swimmer
Yet Hodgson clearly has done plenty right. A former U of Minnesota swimmer with a trademark bushy white beard, Hodgson is a character who occasionally totes a 12-string guitar to practice. (He plays in a guitar-and-fiddle band, Show’d Up, every Thursday with other St. Thomas folk.) He recently won his third consecutive MIAC men’s swimming coach of the year award, to go with women’s titles in 2008 and ’09. Going into this season, he had coached 44 All-Americans.

Now he will be taking his first championship team back to the Aquatic Center at his alma mater for the NCAA Division III Championships March 18-20.

“The symbolism of me going back to the U is small,” Hodgson said. “I’m very happy for the seniors who won’t get the chance to swim in the new pool. If there’s any better way to finish the old pool, this is it.”

The season of Frankenstein.