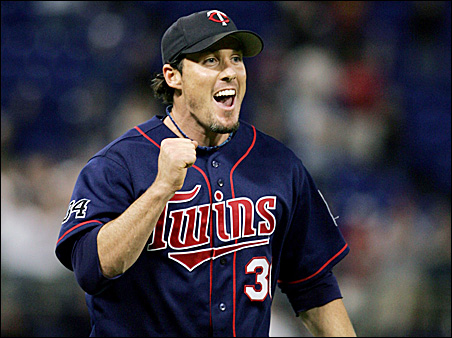 REUTERS/Eric Miller
Given his age and the experience of other pitchers, there’s no guarantee that Joe Nathan’s rebuilt arm will be ready for the start of next season.

As expected Joe Nathan will have season-ending Tommy John elbow surgery to fix a torn ulnar collateral ligament, officially making that decision Sunday morning after feeling soreness during a highly anticipated game of catch with pitching coach Rick Anderson (only to have the news overshadowed by Joe Mauer signing hours later). Nathan and the Twins had hoped that a few weeks off would allow him to pitch through the pain, but that was always a massive long shot.

Now the optimism is aimed at Nathan making a full recovery for next season, but as Francisco Liriano and Pat Neshek have shown recently, Tommy John patients can have a true recovery timetable that stretches beyond the oft-quoted 8 to 12 months. Liriano underwent the surgery in November 2006 and has a 5.12 ERA in 212.2 innings since returning, while Neshek took the mound again about 14 months after surgery and may not be 100 percent yet at 16 months.

For every Liriano and Neshek, there are also examples of pitchers who returned to the mound sooner than 12 months and didn’t miss a beat, but at 35 years old, Nathan seems an unlikely candidate to be one of them. He’ll miss all of this season, there’s a good chance he’ll miss at least some of 2011, and his career is very much in jeopardy following a seven-season run as arguably the best reliever in baseball.

As part of a four-year, $47 million extension signed in March 2008, he’s owed $11.25 million in both 2010 and 2011, with the Twins holding a $12.5 million option or $2 million buyout for 2012. Add it all up and the Twins have another $24.5 million committed to Nathan, which is a harsh reminder of the risks involved in handing out long-term contracts to even the very best players. However, insurance will reportedly cover as much as half of his salary for this season.

There’s no doubt that losing Nathan is a big blow to the Twins’ playoff chances, but my hope is that they don’t overreact by paying a premium for an “established closer” via trade. Closer is the most overrated “position” in baseball, as many people attach some sort of mythical value to the role, despite the fact that the MLB average for converting ninth-inning saves is typically around 85 percent, and elite closers like Nathan top out at around 90 percent.

Beyond that, Nathan himself is an example of how most successful closers are failed starters, former setup men, or both. In fact, Nathan, Rick Aguilera and Eddie Guardado all fall into the “both” category and rank 1-2-3 on the Twins’ all-time saves list. Prior to thriving as closers for the Twins, that trio had accumulated a grand total of just 26 career saves in 17 seasons as big-leaguers, which coincidentally is the exact number of saves Jon Rauch has in seven seasons.

Heath Bell of the Padres saved 42 games with a 2.71 ERA last season and is now being linked to the Twins as a possible Nathan replacement, but at this time last year he was a 30-year-old setup man with just two career saves. That he’s now viewed as an “established closer” whose experience in the role is touted as evidence that the Twins should pay a premium for him via trade shows just how silly the whole notion is in the first place.

Certainly there are some scenarios in which trading for a quality reliever could make sense for the Twins and depending on the cost involved, Bell might even be a worthwhile target, but to overpay for that same quality reliever largely because he has “closing experience” that their in-house options lack would be a mistake in logic. Bell only has experience at closer precisely because the Padres focused on his ability rather than his save total one year ago.

Truly replacing Nathan is impossible because he’s a great reliever, but for closers the dropoff from “great” and “mediocre” is typically three to five blown saves, some of which still end up as wins anyway. Rauch, Matt Guerrier, Jose Mijares, Jesse Crain and a post-surgery Neshek don’t fit the description of an ideal closer, but the same is true for many pitchers who have success in the role. Hell, last year the best save percentage in baseball belonged to Fernando Rodney.

Once you set aside the inflated, often hyperbolic importance placed on the closer role there’s no reason to think that group can’t produce someone capable of converting save opportunities at an 80 percent clip, which all but the disasters tend to manage each season with or without “closing experience.” Bell is better than Rauch or Guerrier or Crain, but if the price tag involves Aaron Hicks, Wilson Ramos or Ben Revere, they’re better off trusting the in-house options.