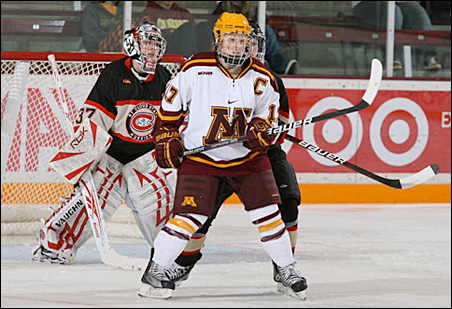 For one weekend, Minnesota will be the capital of women’s sports in the United States.

For the first time in NCAA history, the Division I and III women’s hockey Frozen Fours and a Division I women’s basketball sub-regional will be held in the same state on the same weekend.

The University of Minnesota hosts basketball at Williams Arena beginning Sunday and the D-1 Frozen Four on Friday and Sunday at Ridder Arena. (The Gophers qualified in hockey, led by forward Emily West and Patty Kazmaier Award finalist Noora Raty in goal.)

And down in St. Peter, Gustavus Adolphus will be the site of the D-3 Frozen Four on Friday and Saturday, involving the Gusties, defending champion Amherst (Mass.), Norwich (Vt.) and Elmira (N.Y.).

“We’re definitely the State of Hockey this weekend,” said Gusties athletics director Al Molde, who serves as the tournament director.

Unlike the events at the U, which the school had more than a year to prepare for, the Gusties are putting together a national championship tournament on the fly.

Eastern teams usually dominate women’s D-3 hockey, and in years past the NCAA awarded the Frozen Four to the No. 1 seed, which receives a bye into the national semifinals. The NCAA chooses a participant, rather than a neutral site, to ensure a decent gate. 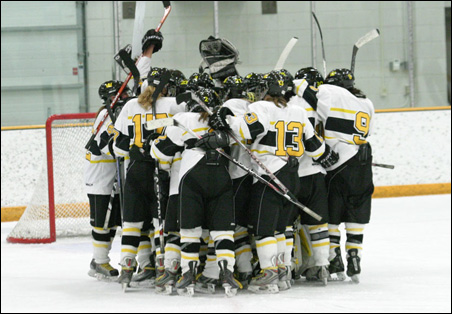 Courtesy of Gustavus Athletics
The Gustavus Adolphus women’s team will take on defending champion Amherst on Friday in the Division III Frozen Four.

This year, in an attempt to hold the finals west of New York State for the first time, the NCAA announced last week that the winner of the quarterfinal between Wisconsin-River Falls and the Gusties would host. So when Gustavus won, 2-0, last Saturday for its 13th consecutive victory, Molde and his staff had plenty of work to do. And fast.

“Gustavus has a tradition of holding national events in a first-class manner,” he said. “We don’t want to disappoint folks.”

Some planning and setup could be done in advance, but Molde and his staff dove into the task in earnest on Sunday.

Because St. Peter has only one hotel of any size, Molde arranged for three in Mankato, about 15 minutes away, to house the teams, NCAA staffers and officials. Someone needed to paint NCAA logos on the ice at Don Roberts Ice Rink, and Molde contracted with a firm to do it after checking with the Verizon Wireless Center in Mankato. The ticket office attached a link to gustavustickets.com to handle out-of-state ticket requests. A pre-tournament banquet, required by the NCAA, had to be arranged. And more workers were needed to handle parking, concessions, etc.

By Tuesday, Molde was so busy he momentarily lost track of what day it was. “Sunday didn’t seem like Sunday,” he said.

(A personal aside: Sports information directors at Minnesota Intercollegiate Athletic Conference schools work long enough days at playoff time without having the demands of a national event dropped on them. The Gusties’ SID, Tim Kennedy, sent out an email early Tuesday morning advancing the Frozen Four a sobering 1:28 a.m. time stamp. And Kennedy said that’s not the last thing he did before he left the office.)

This will be the fourth Frozen Four for the Gusties and Coach Mike Carroll since the Division III tournament began in 2002. They have never reached the championship game, which has been an all-East affair every year except 2004, when Wisconsin-Stevens Point lost to Middlebury (Vt.).

Boosted by such productive underclassmen as forward Allie Schwab and goalie Danielle Justice — both sophomores — the sixth-ranked Gusties have gone 20-1-1 since a 2-3-1 start. Justice’s stat of 0.85 goals against average is the lowest in Division III. The second-lowest GAA belongs to Amherst’s Caroline Hu, at 1.00; the Lord Jeffs are 7-1-3 against ranked teams.

Tickets, all general admission, will be available at the door. An all-session pass is $20 for adults and $10 for students, with single sessions available for $12 and $6. Molde hopes Gusties fans will pack the 1,500-seat rink.

“We’re hoping for a great crowd, but we’re realistic, too,” Molde said. “With the Frozen Four at Ridder, and March Madness, there are a lot of things going on. Our fans are pretty avid, and we know we’ll have those folks coming.”

Neither the basketball regional at the U — which features Kansas City Region top seed Nebraska, as well as first-time NCAA qualifier Northern Iowa — nor the Division I Frozen Four is sold out. Tickets can be purchased through gophersports.com.