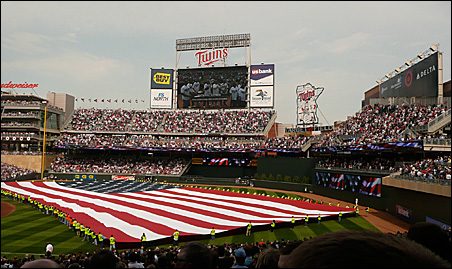 MinnPost photo by Jay Weiner
Before the game, stadium construction workers carried the American flag onto the field.

Like the neat little touches all over the Twins’ new $545 million home, from the blown-up baseball cards flanking the walk from the light-rail station, to the old Metropolitan Stadium flagpole on Target Plaza. Or the way the Twins wove franchise history into so many corners of the place. Or how the noise from the capacity crowd of 39,715, even without a roof to trap it, drowned out a ringing cell phone.

But maybe the best assessment of the ballpark — impolite, but accurate — came from the Brooklyn Park kid, Pat Neshek, the Twins’ righthander who used to pay to watch this team play in the old joint 12 blocks away. Before heading out for batting practice Monday morning, Neshek spoke with wonder about this limestone-faced palace financed by the Twins and Hennepin County taxpayers.

“It’s really surprising when you think of the Twins, who aren’t known for spending money,” Neshek said. “But this facility is great.”

There you have it. An organization infamous for frugality and cheapness outdid itself on Monday in the club’s first outdoor home opener since 1981, almost a generation ago. So much went right this day that even the forecasted rain held off. Carl Pavano threw the first pitch at 3:13 p.m., on a 65-degree afternoon no one could have predicted three months ago.

“I’ll be honest. I thought I’d be wearing a ninja outfit,” said Denard Span, the Tampa product. “But this is awesome.” 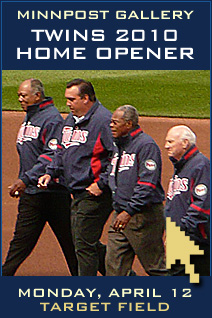 The Twins played flawlessly except for one gaffe, left fielder Delmon Young misplaying a David Ortiz deep fly ball into an RBI double in the fourth. Jason Kubel homered to right, short of Target Plaza, but the wind deadened a well-hit Mike Cameron fly to center in the seventh that fell harmlessly into Span’s glove.

For the most part, Twins fans left the grounds impressed. People took digital pictures of the ballpark structure, and each other, as much as the field. “It’s beautiful,” said Matt Joseph, 33, of Fridley, who paid $175 for a $27 ticket on Craigslist, just to be part of this. “Positively gorgeous. It’s something we’ve waited a long time for.”

There were some glitches, as club management expected. Some spectators in section 139, by the right-field foul pole, could not see left field, and the flags occasionally blocked their view of the main scoreboard. The concourse on the lower level in right near the Mill City Grill, where long lines formed to buy steak sandwiches, wasn’t wide enough to accommodate fans entering the ballpark just before the first pitch. And in some locations, it took forever to get a beer.

“A lot of people are out walking around,” said Mark Massmann of St. Paul, who patiently waited about 10 minutes on line for ice cream. “They want to see everything.”

In other locations, the 46-foot concourses — twice the width of the Dome — provided smooth traffic flow. I made the classic Minnesota mistake of mindlessly stopping in the concourse while looking to talk to fans. People just walked around me, without a single dirty look.

Players, of course, loved the ballpark, especially compared with the Metrodome. Ortiz, the ex-Twin, took an unexpectedly scenic route to the clubhouse when his driver got lost trying to find the loading dock and dropped him at Gate 29, in front of hundreds of fans. Ortiz missed his old friend, the late Kirby Puckett, whom he said would have loved this stadium and this day. He has no such love for the Twins’ former home. 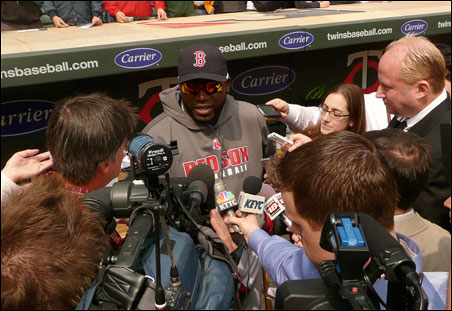 “I told you guys a long time ago that the only thing I missed about the Metrodome was getting the hell out of there,” Ortiz said.

“The Metrodome was a place you wanted to be in April. After that, it sucked. It was like you were in prison.”

The day did not provide answers to a bunch of other questions, mainly involving the field of play. What happens when the first wild pitch caroms off the limestone backstop? Will it hit the catcher in the back before he turns around?

How long will it take Michael Cuddyer to learn the nuances of the right field wall? Curiously, Cuddyer says the cushion on the lower part of the wall plays harder than the wood above it. “It shoots off that padding,” he said. “It comes off the wood a lot softer.” The limestone-faced overhang, jutting eight feet over the field, offers another curiosity.

As the spruce trees grow and mature in center field, how might it affect the batter’s view of the ball? If it’s bad, manager Ron Gardenhire has a solution that club executive Jerry Bell probably won’t like. “Minnesota’s got plenty of chainsaws,” Gardenhire said.

It was an emotional day for so many people involved in the stadium effort. Baseball commissioner Bud Selig, a longtime pal of Carl Pohlad, wished his old friend had lived long enough to see a stadium that exceeded expectations. 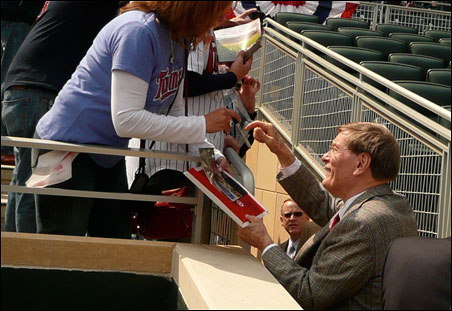 “When I walked out onto the field, it was remarkable,” Selig said. “I’m an optimist, but even I couldn’t have dreamed it would have turned out like it did.”

And as the teams stood on the foul lines during introductions, Nick Punto took it all in — the championship flags, the big crowd, the Twins greats, the pageantry, and the moment in Twins history he felt fortunate to be experiencing.

“It’s our ballpark,” he said. “When I was standing on that line, it was a pretty emotional moment. Sometimes you sit back and realize how lucky you are to be a Major League Baseball player. I had one of those moments.”