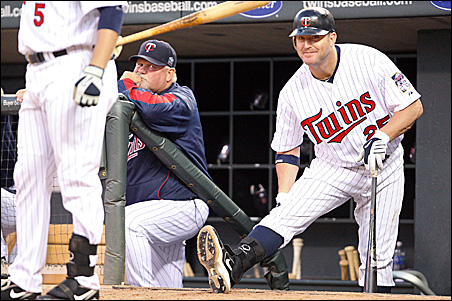 If Paul Bunyan came down from the north woods, showed up at Target Field and demanded to play for the Minnesota Twins, Jim Thome’s uniform might be the only one big enough to fit him.

At 6-foot-3 and 250 pounds, Thome stands like he’s carved from granite, and his throwback high socks heighten the effect. With every home run and handful of RBIs, he seemingly passes another big name on a major-league career list — Harmon Killebrew one day, Andre Dawson the next.

But almost two decades of those massive hacks extracted a price. Thome said he has several degenerating discs in his spine, leaving his back muscles so stiff and weak that the area requires, for lack of a better phrase, daily maintenance so he can play.

And that daily maintenance — a combination of stretching and core strengthening exercises, beginning when he wakes up in the morning and ending at night — keeps Thome’s pursuit of 600 home runs viable at age 39. He may not get there, but at 574 homers — 10th on the all-time list and third among active players — he’s closer than he would have been without his daily work.

Thome’s role may increase in season’s second half
The Twins headed into the All-Star break with multiple problems, from unexpectedly poor starting pitching to an exhausted bullpen to the questionable health of first baseman Justin Morneau (concussion) and catcher Joe Mauer (hip flexor and shoulder). But Thome has been so productive as a part-time designated hitter — 10 homers, 29 RBIs and a .255 average in 145 at-bats — that manager Ron Gardenhire may use him more in the second half, provided his back holds up.

Five years ago, when Thome’s back problems first surfaced with Philadelphia, innovative former Phillies trainer Jeff Cooper took a regimen from renowned California-based back specialist Dr. Robert Watkins and shaped it for Thome. “I really have to thank Jeff Cooper a lot,” Thome said.

Three or four times a day, Thome spends 15 minutes stretching his back, hamstrings and quadriceps muscles. At the ballpark, Thome runs through a five-day cycle of one-hour-and-15-minute regimens before batting practice — back exercises one day, abdominals the next, both on the third day, cardiovascular work on day four, followed by a day of rest. Then the cycle renews. So four days out of five, Thome has a good sweat going before batting practice begins.

Then, about 20 to 25 minutes before the first pitch, Thome usually comes out on the field with other Twins for more stretching, light exercises and jogging. Thome does this even if he’s not in the starting lineup, in case another player is a late scratch.

Once the game starts, you may see Thome leaning on the front railing of the dugout, but he tries not to stay still for long. “I can’t sit,” he said. “I move around.”

The new facilities at Target Field, especially the indoor batting cage and sprint straightaway behind the Twins dugout, help Thome stay loose. On days Thome starts, he’ll pop into the cage in-between at-bats. If he’s coming off the bench, he’ll take five swings in the third inning, 10 or so in the sixth, then repeat his stretching routine while guessing when Gardenhire might need him. Thome never could have done this at the Metrodome, where the indoor cage was under the stands in the right-field corner, almost halfway around the stadium from the Twins dugout.

Thome’s teammates picked up on his diligence. Morneau, who had his own back problems last year, discussed Thome’s regimen with him. But he said he glommed more from Thome about focus and preparation, as did Delmon Young. “Even if he’s not playing, he does everything the same as if he’s in there,” Morneau said. “He’s been a great influence.”

During batting practice on the last home stand, Twins strength coach Perry Castellano gestured toward Matt Tolbert, Danny Valencia and Drew Butera near the cage and said, “All those kids are preparing themselves the same way now, because they’ve seen that. I asked Tolbert in New York [during the Mets series], are you loose? It was 90 degrees, the humidity was up, and we needed him to pinch-run. He said, ‘I’ve been loose for eight innings.’ “

Veterans like Thome have big impact on teammates
Although the Twins’ major-league staff spends as much time teaching as any in baseball, young players often learn more from veteran teammates. The Twins figured that out a couple of years ago, when they stopped pursuing questionable characters like Sidney Ponson and Craig Monroe and turned to experienced hands willing to share knowledge (Thome, Carl Pavano, Orlando Hudson).

Valencia, the rookie third baseman, picks Thome’s brain most often about hitting, but he calls Thome a role model for readying oneself. “He goes about it probably the best I’ve ever seen — constantly stretching, constantly staying loose,” Valencia said. “In a sense, he’s always prepared. I’ve never been around a guy who takes his job so seriously. I try to do what he does, because he’s been successful, and still is successful at what he’s doing.”

The young Twins should also go to school on how the lefthanded-batting Thome attacks that exaggerated shift he always sees, with three infielders on the right side, one sometimes in short right field.

Thome understands his limitations. He can’t catch up with an inside fastball anymore, though he’ll hit a mistake 300 miles. Many pitchers work Thome on the outside third of the plate in the hope he’ll pull a weak grounder. But Thome can still drive the ball to the opposite field, so he uses the old George Brett approach: Look middle-away, stay back and hit the ball where it’s pitched. Nine of Thome’s home runs have gone to left, left-center or center. His only pulled home run was his first, April 8 in Anaheim. That’s one smart old hitter.

Twins notes: Not that deal

That the Twins failed to land Cliff Lee did not surprise one major-league scout who saw the Twins recently. Before Seattle dealt Lee to Texas, the scout predicted the Twins would hold onto catching prospect Wilson Ramos and seek relief help instead of pursuing another starting pitcher.

“Their bullpen scares me,” the scout said. “I’m not sure they can do the job. Detroit and Chicago both have better bullpens. I expect them to make a move.”

You can drop one and plug in Brian Duensing, but then you’ve weakened your bullpen, where Matt Guerrier already looks spent (0-3, 20.25 in five July appearances). Over the last three seasons, Guerrier has been much worse in the second half (3-7. 4.42) than the first half (10-7. 2.48), with August and September his least effective months.

Their likely solution: Acquire two fresh bullpen arms, move Duesning into the rotation, and hope Liriano and one of the other guys improves.

Return of the saint
Tampa Bay senior adviser Don Zimmer, who played for the old St. Paul Saints as a Brooklyn Dodgers farmhand in 1953 and ’54, doesn’t travel often with the team but made the Rays’ trip to Minneapolis earlier this month to see Target Field. The verdict: “It’s a beautiful, beautiful place, just like everybody told me it was,” he said.

July 7 was the 47th anniversary of the horrific beaning Zimmer suffered while with the Saints, which nearly ended his career. Zimmer never played for the Twins, but some of you may remember his place in Twins history. On Sept. 26, 1965, when Jim Kaat clinched the pennant for Minnesota with a 2-1 complete-game victory in Washington, he struck out Zimmer for the final out. It was the last game Zimmer started in the major leagues. (Sources: Retrosheet.org and baseball-reference.com.)

By the way: Zimmer dismissed his old pal Joe Torre’s announcement that he’ll decide in September whether to return in 2011 to manage the Dodgers. Zimmer not only believes Torre will be back unless he’s fired (which isn’t likely), and he told Torre that in one of their frequent phone calls. “I’d be very, very surprised [if he retires],” Zimmer said.

Now batting for the archangels, Michael
Two years ago, I shared with you a memory of Bob Sheppard, the venerable Yankees’ public address announcer who died earlier this week at age 99. It bears repeating here.

Often, at the Catholic Mass for employees and others at Yankee Stadium on Sundays, Sheppard served as the lector. That’s right: The so-called Voice of God read the Word of God. With that crisp diction, you’d better believe nobody missed a syllable. There’s a reason why Sheppard’s recorded voice will introduce Derek Jeter for as long as Jeter remains a Yankee. Jeter requested it to honor Sheppard’s elegance and grace, one class individual saluting another.

I interviewed Sheppard once, for a story for the Newark Star-Ledger. A high school speech teacher and adjunct professor at St. John’s University, Sheppard punctuated his precise answers by raising a finger and demanding, “Write this down!” as if giving a lecture to his class. And I did. How do you say no to the Voice of God?

Let me leave you with one more story that doesn’t directly involve Sheppard.

Jon Miller, the longtime voice of ESPN’s “Sunday Night Baseball,” is also a gifted mimic. He has Sheppard down cold, as well as Sherm Feller, the gravelly voiced Fenway Park public-address legend who died in 1994. Miller broadcast Orioles games while Feller was still alive, and Feller sometimes let Miller come into his booth and “be” him for an inning.

I was covering a Red Sox-Orioles game in the early 1990s for the Portland (Maine) Press-Herald when something about Feller’s diction seemed, well, less gutteral than usual. I looked over at the P.A. booth, and there were Miller and Feller (who never wore his dentures while he worked) laughing like hyenas. Pretty funny stuff.

Then Miller really decided to shake things up. As Sox second baseman Marty Barrett stepped up, Miller introduced him in Sheppard’s voice.

Barrett always took forever to step into the box, and this time he took even longer than usual. He later said he heard the introduction and it confused him for a moment. Me, I about passed an entire soda through my nose.

Twins hitter Jim Thome is always at the ready, thanks to his ‘high maintenance’ approach