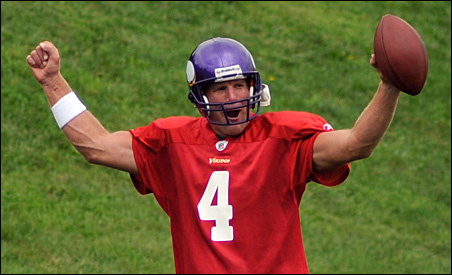 MinnPost photo by Craig Lassig
Favre showed up on the Vikings’ practice field Wednesday with a football and the quarterback’s red shirt.

Those basically are the ground rules. No one in public life cross-examines himself with the same loving torment as Brett Favre. It can be hypnotic. So much so that Wednesday it nearly overshadowed the main event itself — the flight of the three Minnesota Musketeers to rescue the dawdling grandpa from the swamps of indecision, again. It was a mission hatched in secret and desperation by the head coach, Brad Childress, who as a psychology major knew what that antidote was: Bring the Viking locker room to Mississippi.

The side bonus to all of this was to give Brett Favre a forum to re-examine the football mantras of Brett Favre, and he disappointed no one.

“You are talking about setting the bar high…we’re in this together. If we go down, we go down swinging. If we win it all, we do it together. In six months we’ll find out where we stand and they can say it was a great fit or they can say the circus that took place was just that, a circus. I can’t worry about what people say and what people think. The only thing that matters is those guys in the locker room.”

Favre does this almost effortlessly. Nobody in the assembled media squadron Wednesday had the crust to interrupt when Favre returned two months short of his 41st birthday to re-launch the Minnesota Vikings in the direction of the Super Bowl.

You can disregard his vow that this, his 20th season, will be his last. In view of all of the evidence, Favre wasn’t convinced that he should take it seriously himself. Nor was he expecting that from his public after all of the well-documented agonies that have taken him three times from the brink of retirement back into the arms of his adoring crowds. But he seemed aware that his act has pretty much soured part of the public, some of his old admirers in the media boxes  and growing numbers of the old pros in the football fraternity.

Yet you are not going to find much of this sentiment among the big-shouldered gents who wear the white horns of the Minnesota Vikings. He arrived to an eruption of hugs when he showed up on the practice field Wednesday with a football and the quarterback’s red shirt. When it was over he went in front of the microphone for what was described as a news conference. Favre regards most questions as an invitation to a monologue. This means he pretty well manages the discussion, which invariably makes it more productive than the old Q and A.

Tenderness and money
Favre being Favre Wednesday had some genuine moments of tenderness and, none so much as when he talked about the real reasons he can’t bring himself to walk away from football. He’s pretty much telling the truth when he says it isn’t about money — although he’s not going to turn down the extra $3 million or $4 million he will net for his latest show of reluctance.

He talked about going out on top. He didn’t define it as winning the Super Bowl again and calling it a career. It meant, he said, playing well, and doing it with players he respected. “I’ve got to fall apart sometime,” he said. “I’d like to go out on top. The top is different to a lot of people. Most people think if you go out on top, it has to be a Super Bowl or an MVP. There’s no doubt that when I left last year I went out on top…I think my career speaks for itself.” 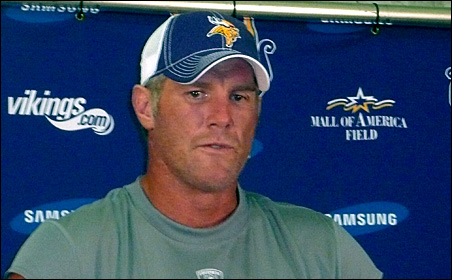 MinnPost photo by Jay Weiner
Favre speaking to reporters Wednesday: “I’ve got to fall apart sometime. I’d like to go out on top.”

Favre is not bashful about subjecting himself to these personal cross-examinations. In fact he thrives on it, and mostly they’re in earnest as well as self-serving. Public introspection is the not the favorite indoor sport of most professional athletes. Did he begin hearing whispers that he was on the downslope, say two years ago when he floundered in the late season with the Jets, struggling with an ailing arm.

“The team [the camaraderie and goals] has always been an important thing for me. It’s a team game. I know I can’t control too many factors except what I do. And I don’t want to fail,” he said “I don’t want to fail. And you know what? I’m being honest with you. Another guy might stand up here and might tell you he’s not worried about failing. Maybe he believes that.”

Millionaire vagabond
There has not been a whole lot of failure in Favre’s extraordinary 19 years of pro football. Favre is a millionaire vagabond, unwilling to surrender the forever youth in him. The football field and locker rooms are the places where he renews himself, an icon football player in his final years feeling and acting like a kid, slapping rumps, bellowing and leading the community sing. Eventually he was going to come back here for one year, on his own time, bad ankle and all. But he packed his jeans and can full of pills and boarded the private jet when three guys from the locker room came down to fetch him and tell him: “Hey, man, we need you but you pretty much got to tell us whether you’re coming or not — right about now.”

It was better and certainly a lot more ominous than anything his coach or his Viking paymasters could have told him. One of the musketeers was Steve Hutchinson, a kind of chronically owly guy with the offensive lineman’s unromantic view of the world; one was the feature locker room cut- up but defensive powerhouse, Jared Allen, and the other a kicker who frankly came as a friend, Ryan Longwell. What they all had in common was that on the field not many people did their jobs better. They came as an odd set of negotiators, primarily as unsentimental butt-kickers. The message: “We need you but are you in or out? We have to know. Today.”

It was not the kind of message that could be easily misunderstood. Favre said “let’s do it,” and got on the plane. He probably would have done the same thing a few days later. But this was better, a little closer to Brett Favre’s theatric heart. It will put him in San Francisco for the second exhibition game and a couple plays on Sunday Night Television.

So Favre is a guy who loves the adulation and the crowds and the exposure and more than any athlete in America today, he is prime time and he really isn’t going to walk away from it until they carry him off. Not that he had to prove it, but 10 minutes after the news conference one of the networks was running his latest Wrangler ad, which with luck was better than the last one.

Favre prepares us to be amazed, again