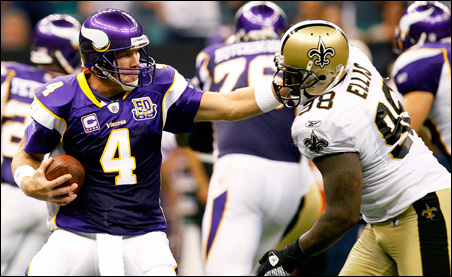 They should have given the game ball to the noisy saxophone player who wore a top hat and a tux in the pre-game parade that once more endeared New Orleans to the world. The sax player blew riffs with more sizzle and a lot more rhythm than the football game that followed.

Yet in the aftermath of the Saints 14-9 victory over the Minnesota Vikings in New Orleans Thursday night, the loss had to feel something less than tragic to the millions of Viking loyalists back home. Puzzling, yes. They were looking for a reversal of last year’s conference title game spectacular that left them and half of the country exhausted.

What they got, though, was a grunting and untidy wrestling match between two teams that spent most of last season terrorizing the rest of the National Football League with their lightning- bolt offenses.

The Vikings might have excuses. They were playing without their best deep receiver, Sidney Rice, and with a young and stitched-up pass defense. It was a defense that the Saints’ Drew Brees’ dented for 237 yards passing and one touchdown, but hardly overran. They were also playing with their star quarterback in a mode not quite ready for a title chase.

Ironically, the Vikings led 9-7 at halftime. It was an odd score because Ryan Longwell, the Viking kicker who goes years without missing field goals and conversions, had an extra point blocked after Brett Favre threw a 20-yard touchdown strike to Visanthe Shiancoe. Before that, Longwell had kicked a 46-yard field goal, and the Vikings in that second quarter seemed to be on offense forever.

They actually appeared to have the game in hand. Their defense had tightened. They had been strategically flustered earlier in the game. For all their pre-game bluster about physical intimation, the Saints ignored their blitzing reputation and sent only three rushers against Favre. The other eight defenders dropped back into pass coverage. Only rarely did they blitz to try to overwhelm the elderly quarterback, who began the season with an ailing foot and clear symptoms of rust in the latest installment of his unretirement trilogy. And New Orleans stuck with its strategy all night.

The result: It was a drab evening for Favre when the spotlight was the brightest. His accuracy of a year ago, virtually flawless from the first game, was spotty. He appeared less in command in the blur of the action, where last year he was at his strongest. Afterward, he was candid about his performance. He lacked precision. Three times he missed open targets. His sheet:15 for 27 and 171 yards, one touchdown and one interception. Against the champs, it was hardly awful but …

“I have no excuse,” he said. “There were three or four throws I just missed … I threw one behind Greg Lewis … I’m sure everyone who watched this game would say that it wasn’t the fireworks that everyone thought it was going to be for either team. I think for us it’s obvious that we can be a lot better.”

For the record, the Vikings begged Favre to come back on his terms, meaning a couple of weeks of practice and conditioning for a man nearing 41 years of age. They said they’re willing to live with the consequences — which, after all, can’t be measured until four months from now.

The game ended up a battle, despite New Orleans’ advantages of home field and concussive noise. After New Orleans scored quickly on Brees’ precision passing, climaxed by a 29-yard strike to Devery Henderson, the Vikings re-discovered Adrian Peterson. And this extraordinary football player, who spent the winter doing penance for his fumbling episodes of a year ago, tore at the New Orleans defenses with a single-minded frenzy that broke tackles and took the pressure off Favre’s aging body and less than prime-time condition. Favre managed the drive smoothly. And suddenly the Vikings were the aggressor. 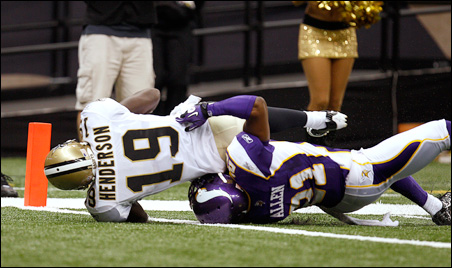 Then, about the time that the Superdome multitudes were wondering whether the magic of a year ago was going poof, the Saints discovered they could actually run against the Viking defensive line — Pat and Kevin Williams, Jared Allen and Ray Edwards — generally regarded as the best in the National Football League.

It wasn’t anything startling. But Pierre Thomas gave the Saints a ground game the Vikings might not have expected. With Brees hitting Marques Colston and Thomas and Reggie Bush gaining on the ground, the Saints moved 74 yards and scored behind Thomas from a yard out. Later, with Thomas gaining against the tiring Viking defensive line, the Saints choked off the Vikings’ last hope, using the ground game to keep possession in the final minutes and run out the clock.

The relief in the Superdome was unanimous if not exactly uproarious. The Saints’ crowd didn’t want it to come down to a battle of field goals. Their field goal kicker, the same Garrett Hartley who beat the Vikings in overtime a year ago, missed one makeable field goal that would have given New Orleans breathing room in the first half. To prove that wasn’t an aberation, he missed another.

With Rice out for six to eight games, it seems clear that the combination of Bernard Berrian, Percy Harvin and Greg Lewis may not frighten NFL opponents for the next couple of months. The team’s newest acquisition, Greg Camarillo, will need a few weeks but is a major-league receiver. The New Orleans’ strategy of dropping eight men into the passing lanes left Shiancoe, the tight end, and Favre’s most inviting receiver, good for the team’s only touchdown and a constant threat over the middle.

Afterward, the Vikings’ Brad Childress mourned the might-have-beens. “We were right where we wanted to be at halftime,” he said. “Then it was three-and-out, three-and-out. There were not a lot of throws to be made downfield. They were going to hold us down and make us bleed slowly … I thought we settled down after [Brees’ opening series and touchdown]. It turned into a defensive struggle. I don’t think anybody would have foreseen that.”

Not the Saints, the Vikings or the handicappers in Las Vegas. Although the Vikings’ rarely resembled last year’s team, it probably should be remembered that they weren’t playing the Detroit Lions or Cleveland Browns of 2009. Somebody asked Childress why his offense turned unproductive in the second half.

He shrugged. “Well,” he said, “they’re the Super Bowl champions,” meaning they weren’t your typical pickup team at the company picnic.

So the Vikings begin the season 0-1. It’s not the first lap to mediocrity. The Miami Dolphins are next, at the Metrodome Sunday. Nobody like Drew Brees plays quarterback for the Dolphins.

And the quarterback of the Minnesota Vikings will have had his introduction to his last season of pro football. He will almost certainly have a better day than Thursday in New Orleans. He may have to, because starting 0-2 with the Viking schedule could herald awkward weeks ahead.