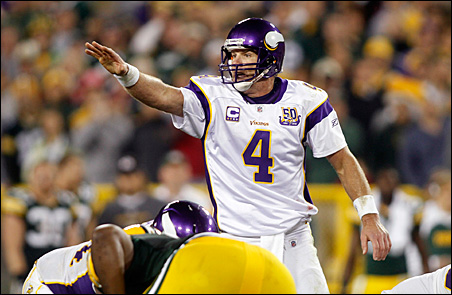 REUTERS/Allen Fredrickson
Brett Favre calls an audible at the line of scrimmage with less than two minutes remaining in the game.

The Viking coach was enraged by the officials, his quarterback verged on an apology and in Green Bay the celebration spilled into the streets and deep into the witching hours.

But one way or another, it all came down to Brett Favre. In any game involving Favre, it almost always does.

At the end, he came limping off the field, the battered gladiator pausing in his tread to the locker room to hug some of his former teammates, oblivious to the boos surfing down from the stadium where for nearly two decades he was happily glorified.

No one on television does this scene better than Brett Favre, with as much ardor or sweet sorrow. So he didn’t mind stretching it out, nor did the cameras. It wasn’t a show. The game consumes this man, and he takes no pains to hide it.

And Sunday it was the postlude to a football game where he could claim no epic performance in the Vikings’ 28-24 loss to the Green Bay Packers at Lambeau Field. They intercepted him three times and harassed him from end to end. Later, his coach questioned some of his decisions. Under the conditions, he might better have turned the game over to Adrian Peterson and Percy Harvin. Still, it was Favre at the clutch of the last five minutes, with one more comeback victory and one more miracle finish riding on his arm and nerve.

It also put Coach Brad Childress on the verge of benching him in the interest of preserving him. Favre might have suspected it because he promptly pre-empted the coach by escorting the Vikings a long way downfield on their next series.

Lambeau was no place for the frail Sunday night. These were two teams who know each other very well, playing in desperation and sometimes savagely in the wake of their early season defeats. It was filled with bizarre moments, shifts in momentum and a rising bitterness by Childress over officiating calls that nullified three Viking touchdowns. Add the spectacular sprints by Harvin and Adrian Peterson’s other-worldly refusal to stop running when all the rules of science suggested there was nowhere to go.

It came down to the closing minutes with the Vikings trailing 28-24 after they had built a 17-14 halftime lead on the legs of Harvin and Peterson, despite the Packers’ substantial territorial edge in the passing game of Aaron Rodgers, Favre’s successor in Green Bay. With Rodgers rarely molested by the Viking rush, the Packers wiped out the Viking lead in the second half on his touchdown pass to Greg Jennings and Desmond Bishop’s 32-yard runback of one of Favre’s gambling throws. That made it 28-17 for the Packers, but Favre brought the Vikings back to within four points with a touchdown pass to Randy Moss.

And when the Vikings forced a punt, Favre launched them on the critical five-minute drive, using Peterson in both the running and passing game. Facing fourth down and five with two minutes left, Favre hit Moss on a 13-yard pass and then, after absorbing a sack, sent the Viking rooters aflame by teaming with Peterson on a screen that brought the Vikings to the Packer 15 in the dying moments. 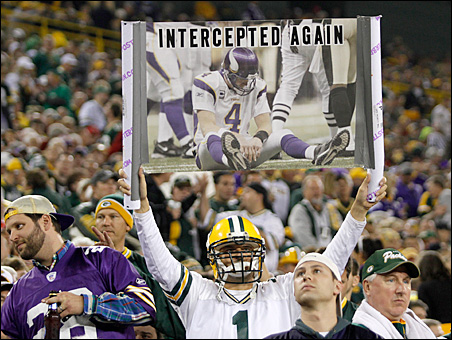 Their momentum looked unstoppable because nobody ever has managed these out-of-the depths finishes like Brett Favre. It was strong enough to absorb two penalties that sent them 15 yards in reverse. And then here it came, Favre to Percy Harvin, in the end zone. Harvin pulled the ball in and rejoiced.

While the Vikings celebrated, the Packer bench confidently threw the challenge flag. The officials reviewed the play and saw one Harvin foot beyond the end line when he caught the ball. The pass was ruled incomplete. Favre threw twice more out of range and it was over.

Childress rails against officiating calls
In the aftermath, Childress railed against the officiating, which earlier had erased an apparent touchdown pass to Visanthe Shiancoe. The ruling was that Shiancoe did not have control of the ball when he caught it just off the grass in the end zone. Adding it to the Harvin call and a few others Childress deplored, the Viking coach lost his cool and his normally literate command of the figures of English speech.

“I must not understand [the rules]” he told reporters after the game. “It’s not the way we were taught.” Referring to the Shiancoe call he said. “It doesn’t make any difference if you control the ball with your hand or forearm. They said he didn’t control it, but he controlled it. The litmus is 50 drunks in a bar. Those 50 drunks say that’s a catch, and 50 writers in this room, you may be drunk, too, but it’s a catch …”

All right, it’s a catch. Or something. For Favre, the loss and the pounding he took, the re-injury to damaged ankle, his interceptions, and the failure to hit that one decisive pass near the goal line late in the game left him downcast. “I don’t think it’s ever easy to accept,” he said. “To me [coming that close near the end of the game and failing] was devastating.”

The relationship between Favre and his coach is not one of the world’s soaring love matches. Childress has had to struggle to earn the acceptance of the brassier fans among the Viking colonies, a coach no more than two or three consecutive losses from sinking back to the caricatures of his first two years. Most coaches are in the same boat. Favre is basically adored by football fans everywhere for his success, quirks and prolonged adolescence. He has managed to hold onto that status, despite the latest turmoil investigations involving his alleged crude  advances, sometimes referred to as “lewd,” to a woman formerly employed by the New York Jets.

The disagreements between Favre and Childress have not been serious. But Favre’s physical condition is shaky, his performance through six games less than ordinary. There may be a collision of wills if Childress decides Favre needs some rest from the pounding. He was close to bringing in Tarvaris Jackson for a few series Sunday night.

It’s conceivable that next Sunday at New England might be that time, although that matchup — between Favre and the three-time Super Bowl winner Tom Brady — will be a pivotal one for the Vikings. The loss to Green Bay left them with four losses in six games. Green Bay is now 4 and 3, the same as the Chicago Bears, but the Bears are beginning to look like an impostor.

The Packers aren’t going to scare many teams in the weeks ahead, and the Vikings can step right back into the middle of the playoff race by beating New England, one of the ranking teams in the American Football Conference but shaky in its last few games and vulnerable with no visible running back. It’s a team the Vikings with a healthy quarterback might be able to handle, unless bad things happen in that investigation.

In that case, Tarvaris, meet Randy Moss, and stay very close to Percy and Adrian and those big guys in front.