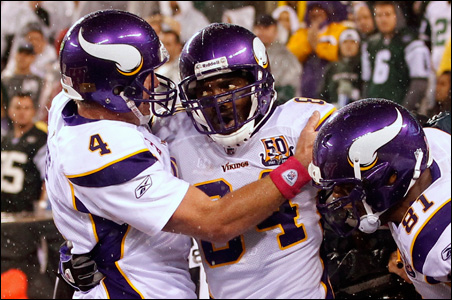 In all honesty, we probably should be surprised that no one’s head exploded Monday night late in the Minnesota Vikings’ 29-20 loss to the New York Jets. Surprised and, oh yeah, grateful.

Circumstances seemed ripe for something Cronenbergian thanks to the convergence of everything combustible in this culture of ours — celebrity, the Internet, TMZ, “sexting,” professional football, 24/7 media coverage, TV legal analysts and, of course, cleavage.

Given the National Football League’s newfound sensitivity to head trauma, it’s a wonder that, at the very least, we all weren’t issued helmets for what became a bruising 1-3 start to the Vikings’ season on a rainy, tawdry evening in the Meadowlands of New Jersey.

A simpler life two weeks ago
Life was so much simpler 15 days earlier, when the Vikings temporarily restored a measure of tranquility and order to their season gone sideways with a Dome-home victory over the Detroit Lions, the “Sodbuster” Kenny Jays of the NFL. Back then, running back Adrian Peterson was the salvation, the hero restored to his rightful place in the team’s offensive pecking order. Wide receiver Randy Moss was a disgruntled Patriot still in Minnesota’s rear-view mirror. Quarterback Brett Favre? Sure, he was looking and playing older, but Grandpa Snaps remained a punchline only for his prima-donna-ness, rather than the butt of jokes for some decidedly non-butt cell photos.

Back then, most of the folks wearing or rooting for the Purple might have guessed that Deadspin.com was some obituary website for old recording artists. Today, they know it as the blind intersection where big-time sports and the National Enquirer violently collide. Meanwhile, deadspin is what the Twin Cities’ morning newspapers are offering on the Vikings’ prospects for Super Bowl XLV.

Aw, who needs Roman numerals when you’ve got Quarterback Caligula?

Sanity was back on holiday Monday — it was, after all, the 518th anniversary of Columbus’ discovery of gridirons — as we all became refugees from some loony bin: Favre, Moss, Vikings coach Brad Childress, Jets coach Rex Ryan working blue as usual, the “MNF” crew in the booth, 77,909 in the soggy stadium and the millions drooling in sports bars or at home, on big screens or small, as their primary entertainment or in the background as they surfed the ‘net for updates on the Big Wrangler and Mr. Happy.

Torrential downpours — there even was a rain-delayed start, in football! — complicated things and contributed to a couple of Vikings turnovers. But then, it’s hard to hold onto the football when you’ve got a Tiger (Woods) by the tail. Favre’s concerns about New York’s blitzing pass rush had to make room for the same coming from NFL HQ in NYC, with the league in full investigatory mode, at least as theater to protect its profits and growing female target market. Decking out its teams in pink apparel as a nod to breast-cancer awareness loses some of its legitimacy if the league’s most famous and visible performer can (allegedly) sexually harass (if that’s what it was) a co-worker when Favre and sideline personality Jenn Sterger both worked for the Jets in 2008.

Was ‘sideshow’ the difference?
The way Favre rallied the Vikings late in the game — reflexive stuff by now to the old Green Bay warhorse — it might have appeared that he was unflustered by the whole scandal and had out-compartmentalized William Jefferson Clinton in his ability to focus and compete. Then again, given the narrow margin between victory and defeat in this one — at least until Jets defender Dwight Lowery’s interception and touchdown return near the bitter end — it is reasonable to suggest that all the sideshow ugliness leading up to and through the game was just enough to keep Favre and the Vikings on the outcome’s wrong side.

Traction both literally and figuratively was a problem for Minnesota in the first half. Favre completed three of just seven passes for 31 yards. Moss was looking like a decoy, and the Vikings’ biggest highlight was a Childress wink that had the receiver completing a pass to the quarterback, a bit of trickery immediately rendered trivial.

But in the second half, as his team trailed 12-0, Favre sparked into action. He masterfully led two scoring drives to again get the Vikings within “one play of the lead,” as Favre likes to say. The gray-haired quarterback — who turned 41 on 10-10-10, in what otherwise was a “666” week for him — amassed 233 passing yards on 11-of-27 throwing with three touchdowns (one to Moss, two to Percy Harvin). The offense generated 285 yards in the half, though a two-point conversion failed at 15-13.

The Vikings’ defense was good enough to limit New York to five field goals, until Shonn Greene’s 23-yard touchdown run in the fourth quarter anyway, but not effective enough to generate any scoring on its own. The offensive line had its hands full (no, that’s not a Favre-related joke) against Ryan’s carnivores up front, although the Vikings quarterback was more hurried than punished.

And afterward, when asked to talk about “the last interception,” Favre could take some very small solace in correcting the questioner and noting there was only one such unfortunate pick. It was a distinction without much of a difference at the end of a long day, which reportedly started for Favre with a tearful apology to teammates at a Vikings meeting.

After midnight, the QB called out the anonymous leaker of said meeting in his postgame news conference, but let’s never forget where this distracting episode started. Favre brought it to the Vikings like some big ol’ garish gear bag full of lurid and left it sitting in the corner at Winter Park, waiting to be unzipped.

Hardcore fans might notice that we actually went a whole “MNF” telecast without repeated shots of Deanna Favre up in a luxury suite. Also, Vikings owner Zygi Wilf and his appetite for a new stadium were kept on the down low as well.

Millstones and milestones
By the end of the night, though, things were back to their regrettable selves, more about the quarterback’s current millstone than his lofty milestones (500-and-counting TD passes, 70,000-plus passing yards) achieved. And Favre looked to be channeling juiced baseball slugger Mark McGwire by repeatedly reminding reporters he wasn’t there to talk about the penis controversy.

The fellow who got upstaged along with the game itself was Moss, whose most impressive moments came in the locker room afterward. He had struggled to get separation from Jets cornerback Antonio Cromartie, managing four catches for 81 yards and that 37-yard touchdown grab. But later — given what’s playing out now with Favre as well as some of the shenanigans (Love Boat) that Moss missed during his time in Oakland and New England — Moss sounded like a newfound voice of maturity and adulthood. Nudging a traffic cop along with his front bumper seems rather amusing now, just another goofy sports anecdote, compared with the coarseness Favre is alleged to have done.

Favre’s world of hurt has a literal component to it, too. The cameras caught him cradling his right elbow frequently late in the game. Favre said the tendonitis bothering him in the elbow felt the worst it has so far this season.

That will only compound doubts already hovering about Favre’s ability to consistently throw the deep patterns that demonstrate Moss’ full value. If his arm cannot heal and endure another dozen contests at least, the entire Vikings season might be reduced to a sideshow. And it could be Tarvaris Jackson who will end up having the tweeting world all a-Twitter.