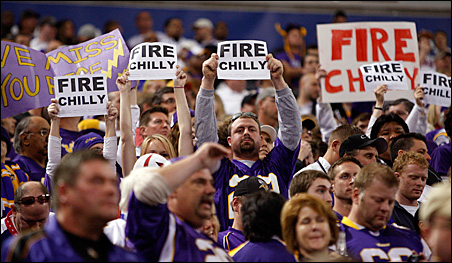 With the rekindled charisma of his greatest years, the old man stepped into the spreading chaos of a Minnesota Viking football season headed for the rocks and performed one more rescue. It may have been the most improbable of them all.

And today in the aftermath of the Vikings’ and Brett Favre’s 27-24 overtime victory over the Arizona Cardinals, and his stunning 446 yards through the air, Brad Childress still coaches the football team; the scaffolds have been at least temporarily retired and the rebellious fans appeased for a few more days of peace.

In fact Childress himself couldn’t resist some gallows humor when it was over. “I think they [the fans] came expecting to see an execution, and it ended up being a pretty good football game at the end.”

What it was at the end was the undefeatable Favre out of his legends, throwing prodigally, hitting 36 of 47 passes, nine times to the revived Bernard Berrian, nine times to Percy Harvin, aching ankle and all, achieving a personal record in passing yardage. It was Favre limping and goading, throwing out of the no-huddle offense in the closing minutes, lifting himself out of his most miserable and painful season. It was Favre putting his team on his shoulders; Favre driving and willing his team from two touchdowns behind in the final minutes and then through the overtime.

And today for the Vikings there is life and a lot more sanity without Randy Moss.

Today, it was not about the Wilf ownership and a decision on unloading Childress. It was about the reclamation of the 41-year-old quarterback, about two Viking touchdowns in the last six minutes to tie the game and then to win it in overtime on Ryan Longwell’s 35-yard field goal. It was about the return of Jared Allen the Sackman; and Greg Camarillo’s amazing downfield flight and hustle to break up a touchdown at the goal line, where he stripped the ball from Arizona’s Kerry Rhodes after an interception and forced a harmless touchback.

But the day was Favre’s, who until Sunday had been a net minus in the Vikings’ bumbling pursuit of a return to the NFL playoffs. It had, in fact, been close to awful by Favre’s standards in his two decades in pro football. And if you are to believe Brett Favre’s early take on the most powerful incentive goading the champion athlete in the crisis, he didn’t so much win the game for the team Sunday; and not for the besieged coach, who he had embarrassed publicly and often. You play first, he said a few weeks ago, for yourself — meaning the gratification that comes with delivering high performance; facing pressure and overcoming. That notion doesn’t follow the storybook scenarios of one-for-all; but he could be right. And the fair question is: Who’s done it better, or longer?

‘I was so tired’
But when it was over it was a mellowed and pensive Favre, sifting through one more escape from what certainly would have been a catastrophic loss for the team. And he didn’t talk about winning for it for Brett Favre. 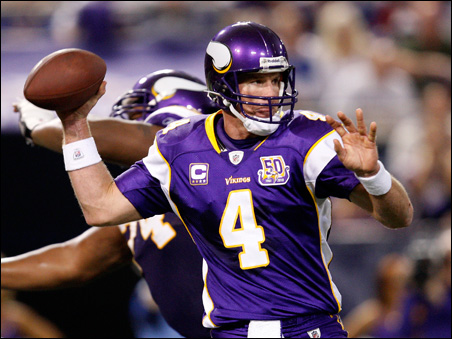 But of the hundreds of times he’d confronted odds, it couldn’t have looked much darker than Sunday. Here was his team, regarded as a Super Bowl favorite a little more than a month ago, already having lost five of its first seven games. It was in disarray emotionally, divided in its attitude toward the coach and confounded by the Randy Moss ugliness. It had been sandbagged Sunday by a 96-yard kickoff runback by LaRod Stephens-Howling in the first half and a 30-yard return of a Harvin fumble in the third quarter. Behind 24-10, the team had come to the brink of cutting the Arizona lead to a touchdown but failed yards short of the goal line after moving 80 yards behind Favre, Adrian Peterson and Harvin.

So the Vikings still trailed a mediocre football team by two touchdowns. And if they couldn’t produce in the six minutes left, the rest of the year was going to be a horror show. It would create this doleful picture heading into the second half the of the season: the ownership disillusioned and smouldering and Childress being measured as the universal fall guy. It was going to put the playoffs all but out of reach for a team that was within five yards and a field goal of reaching the Super Bowl last year. It was also going to open the floodgates to the venom pouring out of the blogosphere.

So the Cardinals, leading 24-10, punted from the end zone and Favre — bad leg, tender jaw, guts and all — brought them back, distributing the ball like a generous casino dealer, throwing to a redeemed Berrian, Harvin and Visanthe Shiancoe. And with Peterson running manically, they scored with Peterson from the four to make it 24-17. There was no question of their unity now, nor of the crowd’s roaring recovery of hope. Jared Allen regained his ferocity and the defensive line regained its swagger. Arizona, milking the clock, was forced to punt again. And the Vikings, from 77 yards out, responded with Favre, Peterson and the battered but nervy Harvin.

With time closing in and the Vikings driving, Favre nursed the clock, throwing to Harvin and Berrian until the timeouts were gone and 34 seconds remained. On third down Favre dropped back with eyes only for Shiancoe racing down the middle. If this one missed, it was practically over. But Favre had made too many money throws like this, and Shiancoe was hungry. The old man put it in on his hands in traffic and Shiancoe went in for the tying touchdown from 25 yards out with 34 seconds left, sending the game into overtime.

The crowd was now in full thunder and Childress himself might have won an election in the second deck. Arizona, winning the toss, was unable to move. Chad Greenway and Allen smothered the Arizona passing game and The Cardinals punted to the Viking 31. Peterson’s supercharged run of 41 yards swept the Vikings beyond midfield, a penalty dropped them back to midfield but Favre had come too far to surrender the brass ring. This was the drive that was going to exorcise all of the mediocrity of his early season, that and the pain and catcalls of his growing critics. So he hit Berrian again and the ball reached the Arizona 23. 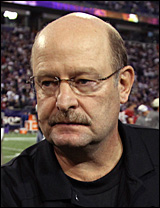 Ryan Longwell doesn’t miss 35-yard field goals in the Metrodome. It sailed through, and suddenly all that boiling disaffection in the stands melted and harmony reigned — at least for another week. With the Vikings now standing at three wins and five losses in the NFL North, and facing the Chicago Bears (5-3) next Sunday in Chicago, they might have given Childress a reprieve. It isn’t at all clear what the Wilf ownership has in mind, whether it will be guided by the fan revolt of last week; or in fact if it makes any sense to be considering dismissing Childress at all. His alleged loss of control of the clubhouse has been partly inspired by some of the news outlets and seasoned by Favre’s innuendo.

There’s no perfection in the brawling domain of the National Football League. The money is huge. So are the egos. Reputations come and go. Childress is a decent guy of principle and a good head but an ironic tendency to avoid simple English.

Chicago is next
All that’s certain is that the crisis will probably resurface if they lose in Chicago. It’s the season, folks.

He denied have a serious conflict two days ago with one of the subsequent heroes of Sunday’s game, the chronically ailing Percy Harvin, who is invariably gung ho in action when he’s turned loose to play. The problem at practice on Friday, Childress said, was a disagreement over when Harvin should receive an MRI on his banged-up ankle. Childress wanted it done Friday. Harvin thought Saturday was a better time. So he had it done Friday. Was that another insult to the coach, a challenge of authority?

“We spent 15 minutes here in the locker room before the game today,” Childress said. “He’s an emotional guy. So am I.” The Friday rumble, he said, “had nothing to do with his hustle or effort. That was not a question and never was.”

So it was one more lack of communication, remarkable for a man like Childress, a decent guy with values who just can’t seem to get in stride with often-literal minded reporters who are susceptible to getting the story from nameless “NFL sources.”

Aching but throwing, Favre rescues his reputation and his coach