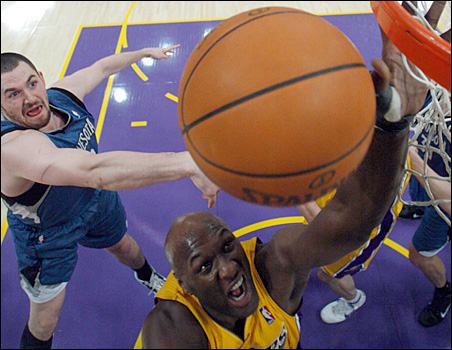 REUTERS/Lucy Nicholson
The Timberwolves’ Kevin Love, left, and the Lakers’ Lamar Odom shown fighting for a rebound during their Nov. 9 game in Los Angeles.

Just in time for the end of the NFL season — or what passed for it for 11 weeks in Minnesota — it is safe again to step into Target Center.

For pro basketball. Y’know, the NBA. The Timberwolves. Remember them?

The unofficial end of the Vikings’ season two Sundays ago against Green Bay came at a terrific time for the Wolves, who used training camp, the preseason and the 2010-11 regular season’s first two weeks to gain traction toward something completely different from what they had been selling for the previous, oh, five seasons.

The days of rebuilding plans that either weren’t really, or were doomed from the start, or were alibis for cost-cutting and time-buying, appear to be over.

Pieces falling in place?
In their second full season under David Kahn, president of basketball operations, and head coach Kurt Rambis, the Wolves actually have some building blocks in place, making progress along their personal learning curves and toward team objectives.

Yes, the won-lost record still is underwater — submerged even. The road remains a frightening place (5-36 last season, 1-8 through Nov. 22). Minnesota’s irresponsible defense is giving up more points so far this season — 110.4 heading into the holiday week, worst in the league — than it did in setting a franchise high of 107.8 during the miserable 15-67 slog through 2009-10.

But the number of blowouts is down these days. The nights when games were decided (at least in the opponents’ heads) soon after the opening tip, with the next 47 minutes or so dragging toward miserable inevitability, are fewer. The roster, even with its holes and shortcomings, makes sense now, compared with years when it looked more like 15 random basketball cards thrown into the home locker room.

“They certainly have a lot of young talent,” Lakers coach Phil Jackson said during his team’s recent stop in Minneapolis. “The talent is going to prevail at some point, if they get their roles down. If they can understand their roles and accept them.”

Improved arena atmosphere
Oh, and the atmosphere in the arena, from the floor seats up to the nosebleeds, is more crisp on a nightly basis than it has been since the Wolves’ run of eight consecutive playoff appearances ended way back in 2004.

The 2004-05 season (44-38) was all about anticlimax, from Flip Saunders’ firing to Latrell Sprewell and Sam Cassell essentially sabotaging the club’s efforts. The final two years of the Kevin Garnett era (65-99) were half-present, half-future, muddled by poor personnel moves and an increasingly fed-up superstar.

Then came last season, when Kahn and Rambis lowered the bar on expectations as low as it could go without triggering an NBA investigation.

The schedule turned unfriendly just before Thanksgiving, with games at Oklahoma City and against San Antonio. But for a stretch of 10 days, bookended by road and home games against the Lakers, there was progress in the air. Maybe Target Center was where all that hope and change stuff from November ’08 went to hide.

“I feel like we’re playing a better brand of basketball,” forward Kevin Love said. “Some would say there’s three tiers in the NBA. An elite level with the Lakers, Boston Celtics, those type of teams. Then there’s a second tier and a third tier. We feel like if we can dominate the third tier, and play well and beat teams in the second tier, and really contend with the first tier, then we’re only going to get better from here on out.”

Kevin Love’s big performance
Love went viral with his performance of 31 points and 31 rebounds against New York on Nov. 12 (no NBA player had topped 30 and 30 since Moses Malone back in 1982) and has rival GMs drooling that they can lure him away as a free agent in 2013. Fellow forward Michael Beasley has been given the ball and a green light to shoot it, with coaches and management convinced he has the talent and the star power to become a star.

With his play against the Lakers on Nov. 19 and the Thunder three nights later, center (and Detroit’s notorious No. 2 draft bust in 2003) Darko Milicic suddenly made Kahn — the object of so much Internet derision during his first season-plus with the Wolves — look like he might have some hoops acumen after all. Draft pick Wesley Johnson, a small forward allegedly picked “too high” at No. 4, has shown the smoothness and shooting eye to, maybe someday, render such criticisms silly.

Even lesser pieces on the team make more sense now vs. guys who were passing through and collecting paychecks before. Point guard Luke Ridnour at least is the best of a mediocre bunch and is sorely missed by the Milwaukee Bucks, the team he left as a free agent. Center Nikola Pekovic of Montenegro, though raw, seems destined to bang at an NBA level. Anthony Tolliver is a lanky wing addition, and Martell Webster’s game was growing nicely until he underwent back surgery on Oct. 25, sidelining him indefinitely.

There have been missteps, no doubt. Beasley will need some tugs on his leash pretty soon to get him working within a team concept. The defense at times has been deplorable, and there are more longtime Wolves observers dreading point guard Jonny Flynn’s return from hip surgery as eagerly awaiting it.

Kahn still has to make the Ricky Rubio situation right, after using the No. 5 pick in 2009 on a player who still hasn’t left Spain. And the front office gacked away Love’s historic night as a marketing tool — the game wasn’t even on local TV.

But as someone who qualifies as a franchise historian of sorts — I witnessed its first 18 seasons up close as a Star Tribune staffer (13 as Wolves beat writer) and the past three writing for national websites while based in the Twin Cities — I can attest that there is something different afoot this season. Since I’m working out of Chicago now for NBA.com, I brought fresh eyes to two home games on a recent trip back into town. And what I saw was intriguing. Promising, even.

Before, for the second half of this decade, I used to wonder about all the people plunking down hard-earned money to watch those Wolves teams. Now I’m thinking that this Wolves team is perfect for Minnesota sports fans: Young and building, with plenty of seats on the bandwagon.

It’s not an open-air ballpark, but it sits very close to one. And it largely is a purple-free zone, which should count for a lot right now.