For three months the Minnesota Vikings have been trying, forlornly, to celebrate their 50 years on the National Football League stage.

On Sunday, with their suddenly fragile quarterback of the ages watching from the sidelines, the Vikings pre-screened what they want and need for 2011, a change of scenario from the ugliness and discord of the past three months. What they delivered in their 38-14 rout of the demoralized Buffalo Bills at the Metrodome wasn’t so much new guys and schemes as a recaptured gusto.

What didn’t change was Adrian Peterson’s other-wordly running, his three touchdowns, on a gimpy ankle — followed by his unabashed lobbying to carry the ball on every play.

It might be something to consider. But you also had to admire the interim Leslie Frazier, looking even more plausible as the head coach of the future, rallying the Viking defense to a level of professionalism it had managed to avoid most of the season. And nobody enjoyed it more than the rollicking Jared Allen, slapping the ball out of the quarterback’s hands behind his back, like an oversized pick-pocket working the carnival crowd.

The migraine-hobbled Percy Harvin was withheld, but here was Tarvaris Jackson, if not the quarterback of the future at least a quarterback who could survive his three interceptions and could scramble out of a broken play. Here was Sidney Rice with his two touchdown catches, a now fully acclimated Sidney Rice, outwrestling two defensive backs in the end zone to come down with one of those in-God-we-trust passes that Brett Favre introduced to the Viking playbook last year and happily borrowed by Jackson Sunday. 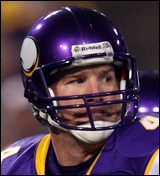 Favre’s status for the rest of the season, including the New York Giants at home next Sunday afternoon, is likely to be uncertain the rest of the week. He suffered a shoulder injury when he was sacked from behind early in the game. Tests Sunday revealed no fracture but more will be made today. Piled onto the stress fracture in his ankle and the rest of his ailings, it may jeopardize his consecutive-game streak that reaches back 20 years.

Playoffs?
But where two weeks ago the Vikings were wading in oblivion before the departure of Brad Childress, today they actually find themselves relevant again. As a reborn contender for the playoffs?

The mathematicians say “theoretically, yes.” The grizzled old junk yard dogs of pro football say: Get real and look at the schedule.

The Vikings have now won five games and lost seven with four games remaining. Their next three opponents are the Giants at 8 and 4, the Bears at 9 and 3 and the Philadelphia Eagles of Michael Vick at 8 and 4. The Green Bay Packers, who have already beaten the Vikings twice, also are at 8 and 4. If the Vikings win ALL of their games the next three weeks and then beat the Detroit Lions on Jan. 2, they would finish at 9 and 7 and technically be in a position to qualify for the playoffs — if the Packers and/or the Bears lost to everybody in sight the last four weeks and there really is a red-nosed reindeer.

Nobody in the Viking locker room, Frazier said, “is talking playoffs,” which probably testifies to their awareness of the realities of life. The focus, he said, is today. Sunday in the thundering Metrodome on top of their victory over Washington a week ago, he said, “was a huge lift for our football team…Our players fed off the energy. They responded to the adversity [an interception and 40-yard touchdown run by Buffalo’s Drayton Florence on one of Jackson’s early and less inspired throws].”

But while he applauded Jackson’s later efforts — two touchdown passes to Rice offset his three interceptions — he left no doubt about his choice for the starting quarterback. “It will be Brett Favre if he can play,” he said. “He’s our starting quarterback.” And will be, no matter how the season swings in the final four weeks. 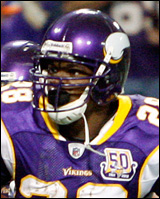 Frazier clearly is aware of the noisy speculation about 2011 and the fan agitation to start auditioning for next year, beginning with quarterback, meaning Jackson. There is no reason to believe the Vikings have settled on Jackson as their quarterback for 2011, assuming that Favre is finally coming clean with his public and posterity and is ending his career this season.

But if he is physically capable of performing there are also bound to be loud sounds from his galleries for a sentimental Brett Favre Tour in the last weeks, celebrating his two decades of extraordinary performance. It’s not likely that Brett Favre would discourage such clamor. He might even consider promoting it.

Frazier would certainly support that kind of sentimental finish for Favre for a couple of reasons. Frazier admires Favre hugely. Almost all of the veteran pro people do, not only for his matchless career and his skills and toughness, but his joy of combat and his embrace of the game’s camaraderie. His recent sideshows they can live with.

But Frazier like Favre can’t be thinking much beyond December. He may be the head coach in 2011, but that’s still impossible to calculate. It’s even hard to calculate for certain whether the league will be operating at all in 2011 in view of the spikey owner-player negotiations ahead. What Frazier knows is that he’s the head coach of the Vikings until Jan. 2. He also knows his starting quarterback on Sunday will be Favre if he’s healthy and he will be the starting quarterback the following week and the week after that, and on Jan. 2.

Next year’s QB
Frazier is not in the business of evaluating quarterbacks for the next season, although Jackson is one possibility. The truth is that Jackson has been a good soldier in the Viking ranks for four years but has yet to demonstrate the stability, decision-making acumen and performance under pressure that makes quarterbacking so critical in the National Football League.

But he was adequate Sunday and the Buffalo Bills were certainly dreadful. Maybe the weekly near misses that had victimized this struggling young team all season simply wore them out. The young quarterback, Ryan Fitzpatrick, was hounded and inaccurate most of the day and Bills’ defensive line and linebackers spent most of the game colliding with each other when Peterson attacked.

The Bills matched their turnovers with dumb penalties and what seemed an utter lack of preparation. As a result the Vikings barely missed Steve Hutchinson and Anthony Herrera, two of the dependables on the offensive line. Which meant that Peterson and Toby Gerhart carved up Buffalo on the ground. Peterson’s Sunday scoring production, one on a 43-yard breakout, represented the fourth time he had he had scored three touchdowns in a game in his four years with the Vikings. It meant that he has now rushed for at least 10 touchdowns in each of those first four years, equaling LaDainian Tomlinson and Eric Dickerson as the only players in league history to do so.

The Giants are not likely to be as accommodating Sunday.