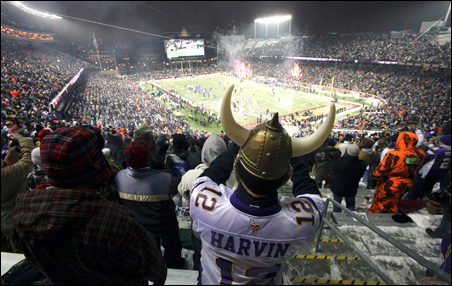 The Vikings attacked the Chicago Bears with a pre-Christmas snowstorm, a freezing drizzle and single-digit windchill. They added a parade of stars summoned from 50 years of football history and a Brett Favre suddenly  rehabilitated as their starting quarterback.

Add snowballs from playful customers at the University of Minnesota’s TCF Bank stadium. Thousands of them reveled in their Arctic boots and coveralls and their escape from 29 years of indoor football.

What they lacked was an organized football team on the tundra.

That and some minimal strategy to stop Jay Cutler in the air, Matt Forte on the ground and the record-setting Devin Hester when they were rash enough to kick the ball to him.

For a while it looked like a ten-strike. Favre was playing, declaring his throwing arm sound enough after the Vikings had virtually announced that he couldn’t play. After one of his overnight revelations, Favre persuaded them to change their minds. And the Vikings jumped out into the lead.

Unimpressed, the Bears recovered and ultimately walloped the Vikings 40-14 Monday night to clinch the title in the National Football League’s North division.

Banged head on the freezing turf

Winter playing conditions in Minnesota have never terrified the Bears. They get lousier weather coming off Lake Michigan. And the Vikings might have played it closer if Favre had lasted. But he left the game unable to return after being sacked by the Bears’ Corey Wooton early in the second quarter and banging his head on the freezing turf.

The Vikings trailed 10-7 at the time. Favre’s replacement, the rookie Joe Webb, couldn’t move the team consistently, although his raw athletic gifts were undeniable. So it was an almost a predictable climax — but not the finish — of a Viking season of alternating bathos and turmoil.

They began the year touted as a prime Super Bowl contender. After their remaining games at Philadelphia and Detroit, they will finish with a losing record and without knowing who will be their starting quarterback or their head coach in 2011.

But they do lead the division in self-induced misery and novelty. It began with the second annual vaudeville of Favre’s return, the dismissal of Coach Brad Childress, the Randy Moss debacle, and finally the orphaning of the team with the Metrodome collapse. By this week most of the tension of an underachieving season was gone, but so was all pretense of hope.

For a while this week it looked as though all of downtown Minneapolis might have to be postponed. But the natives declined to panic, regiments of snow shovelers had exhumed the university football field. The emergency vehicles did their work. And more that 40,000 people (compared with the sellouts of 63,000 at the now-deflated Metrodome) came with their woolies, facemasks, snow pants and fanny warmers.

“The fans had a secret weapon nobody counted on,” said Tom Szarzynski a Minneapolis high tech equipment dealer. Szarzynski watched the game from the end zone with his girlfriend, Megan Orr, after paying $20 to park his car in a nearby lot.

“We stood up most of the game. So did almost everybody else. That way your butt wasn’t welded to the seat,” he said. “I can’t say we were especially cold. I just love outdoor football, getting involved with the elements, whether its sunshine or the snow and even the rain we had during the game. You just seem more of a community that way.

“So our guys lost. It was still something to carry away. And for me the biggest thrill — as a guy who has watched this team year in and year out — was to see those great retired players on the field, and Bud Grant being lifted on their shoulders. And while I love to watch Adrian Peterson run, there was Chuck Foreman out there with the others at halftime, the Ellers and Marshalls and Randalls and all the others. Seeing Foreman out there took me back to those spin moves he use to make running at top speed and faking those linebackers into the second row.”

‘The cold didn’t bother me’

Millions of others watched the game around the country and what was almost certainly Favre’s last appearance on ESPN’s “Monday Night Football,” a venue in which he has performed some of his most memorable heroics.

It wasn’t going to happen this time. He said he went blank after hitting the ground early in the second quarter. “The cold didn’t bother me,” he said. “I’ve played in cold before and blizzards.”

Nor could he fully explain his sudden urge to contact interim Coach Leslie Frazier early in the morning with the news that he wanted to play, despite “having no idea whether I could throw the ball.”

He called Frazier Monday morning after having a sudden urge to play in the game, which usually translates into something like: This is a “Monday night game, I play in games like this, so why not? “

“I said I’d hate to put [Frazier] in an awkward position, but if we could work it out…”

Not surprisingly, Frazier said it was possible. Interim coaches have a hard time saying no to Brett Favre. Favre made his case. “It would be my last home game and I actually look forward to playing in blizzards.”

Sounds logical. His throws looked good in the pre-game. And Favre threw an early touchdown pass to Harvin, then went down and left the game with an apparent concussion.

Favre made a nod to the quirks of his decision making. “I probably shouldn’t tell you, one way or another”

He suffered a shoulder sprain two weeks ago and sat out the Vikings’ game with the New York Giants last week. The daily bulletins on Favre’s condition seemed to leave no possibility that he might come back this week and Joe Webb became the centerpiece of the pre-game talk. Favre is rarely intimidated by everybody else’s certainty. So he put it to Frazier on a sorta, kinda basis.

“I had no idea whether I could throw until I got to the stadium,” Favre said. But he felt and looked good in the warm-ups, and by the time all of the announcements had been made and nobody had much doubt, he found Harvin open in the first quarter, fired and suddenly the Minnesota Vikings were leading 7-0. In fact they seemed to be playing with more urgency than the Bears.

But Cutler threw a perfect rainbow to the flying John Knox for a 10-7 Chicago lead, then a 15-yarder to Hester for a 17-7 halftime lead. Hester set an NFL record by bringing a punt back 64 yards to score, the 14th time he has returned a punt or kickoff for a touchdown. Webb scrambled 13 yards to narrow the Bears’ lead to 27-14, but Cutler threw his third touchdown pass to Rashied Davis and Robbie Gould padded it out with field goals.

With Adrian Peterson sidelined with injuries, the Vikings ground game did not especially frighten Brian Urlacher and his carnivorous pals of the Bears’ defense. Webb’s passes scared them even less, although the young sixth-round draft choice roused the crowd with his long-striding scrambles away from the blitz. In the end, the Bears dominated across the board and happily strolled to their locker room afterward, wearing their freshly minted division champion hats.

What did bring down the thunder for the evening for the Vikings was the celebration of their 50th years in the NFL, climaxed by the halftime appearance of some of their greatest stars. The fans gave them and their Hall of Fame coach Bud Grant an ovation that ultimately constituted the one stroke of exhilaration in their mournful year of 2010.