• Joe Christensen of the Minneapolis Star Tribune is among multiple sources reporting that the Rangers are making a strong push for Jim Thome, which is surprising, considering Texas spoke publicly about shifting Michael Young to designated hitter after inking Adrian Beltre to an $80 million deal last week and announced they were no longer interested in re-signing their 2010 designated hitter, Vladimir Guerrero. 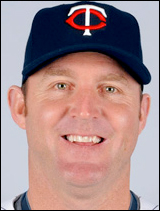 Thome has talked about wanting to return to Minnesota, and general manager Bill Smith told Christensen that the Twins still hope to re-sign him, but clearly the two sides are far apart on money or contract length. Thome’s projected role could also be a factor, because if he re-signs and Justin Morneau is healthy, the Twins would have five hitters for four lineup spots, which is the same logjam that led to Thome starting just 34 of 84 games prior to Morneau’s concussion.

If the Twins are offering him only a part-time gig and won’t pay a premium or make a two-year commitment, it makes sense that other teams have entered the mix for Thome, who was one of the most valuable hitters in the league last season while earning just $2 million. Thome also isn’t an ideal fit for the Twins’ lefty-heavy lineup because he’s a left-handed bat who should be on the bench versus most left-handed pitching.

However, handedness is a secondary concern that should come well behind overall production, and Thome is the best bat available. For instance Guerrero, who Thome would be replacing as the DH in Texas, is a right-handed hitter, but his OPS was 200 points worse than Thome’s and he slugged just .426 in the second half before struggling mightily in the playoffs. Swapping out Thome for a righty might make the Twins’ lineup more balanced, but it won’t make it better.

• For much of the offseason, the Nationals were believed to be the Twins’ main competition for Carl Pavano, but last week general manager Mike Rizzo downplayed Washington’s interest in Pavano, claiming, “We haven’t talked to his agent since the winter meetings.” Shortly after that, reports began to surface that Pavano and the Twins were closing in on a two-year deal, but no new developments have emerged yet this week.

Pavano is a 35-year-old with an extensive injury history and the second-lowest strikeout rate in baseball last season among all pitchers with more than 180 innings, so even a two-year deal is a big risk for a team that could let him walk and fill the rotation with Francisco Liriano, Scott Baker, Kevin Slowey, Brian Duensing, and Nick Blackburn. Beyond that, by re-signing him the Twins would be passing on two compensatory draft picks. 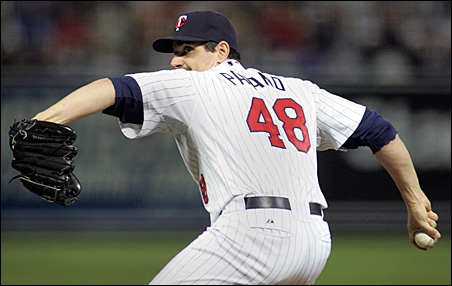 I’d probably let Pavano walk, take the draft picks, spend the money on relief help or a veteran bat, and head into the season with the above five-man rotation and Kyle Gibson waiting in the wings at Triple-A, but re-signing him for two years and $15 million or so would be palatable enough. Bringing back Pavano could also enable the Twins to move one of the other starters to the bullpen or use them as trade bait, although those aren’t necessarily good things.

• Most of the relievers I highlighted early in the offseason as potential low-cost bullpen targets are now off the market, and many of them signed cheaply enough that they would have made sense for the Twins. Here are the statuses of the 13 relievers I suggested the Twins pursue:

Aside from perhaps Jenks’ two-year, $12 million contract, every one of those relievers would’ve made sense for the Twins at those prices, but instead they’ve essentially done nothing to plug the bullpen holes left by Jesse Crain, Matt Guerrier, Brian Fuentes, and Jon Rauch. Jim Hoey is an intriguing pickup from the J.J. Hardy deal, and there are some minor leaguers capable of stepping in, but it would’ve been nice to see the Twins sign one or two of the above relievers.

Coffey and Qualls are the only unsigned relievers from my low-cost list, and Tuesday Buster Olney of ESPN.com wrote that Qualls “is llooking for a one-year deal to re-establish his value before going back out on the market.” Here’s what I said about Qualls in recommending him as a low-cost target a month ago:

With a 7.32 ERA in 59 innings between two teams, Qualls had a dreadful season, but most of that can be blamed on a .399 batting average on balls in play that was the worst in all of baseball among the 327 pitchers who logged at least 50 innings. In fact, Qualls was one of just two pitchers with a BABIP above .375. Qualls could be unlucky again in 2011 and that number would still probably drop by 40 points, and his career mark is .309.

Thanks to a solid strikeout rate and high percentage of ground balls, he posted a nice-looking 3.91 xFIP that would’ve ranked second on the Twins behind only Francisco Liriano, and both his xFIPs and ERAs were consistently in the 2.75-3.50 range from 2004-2009. He’s maintained good velocity on a fastball-slider combo, and if the Twins can avoid being scared off by his ugly ERA, there’s a quality setup man to be found in Qualls’ track record and secondary numbers.

There’s no indication that Qualls is even on the Twins’ radar, but I’d feel a lot better about the middle relief corps if they could sign him for $2 million or so.

• On Tuesday, the Twins announced non-roster invites to spring training, which are players not on the 40-man roster who’ll report to big-league camp in Fort Myers. Six of the 19 non-roster invitees are catchers, which is common, because teams need battery mates for the extra pitchers in camp. Beyond all the backstops, the list includes minor-league veterans given invites as part of their deals and three legit prospects in Gibson, Carlos Gutierrez, and Kyle Waldrop.

Odds are that none of those guys will crack the Opening Day roster, but there is certainly a handful of non-roster invitees with a chance.

The fate of Jim Thome and Carl Pavano, and other Twins notes