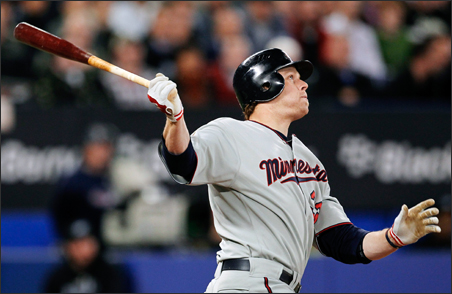 REUTERS/Mark Blinch
It was a big day for Minnesota Twins Justin Morneau, shown here in a file photo, and for his teammates.

Monday night, after a lengthy telephone conversation with his doctor in Pittsburgh, Morneau received medical clearance to play his first game since suffering a concussion July 7 in Toronto. Krista Morneau noticed her husband walking around with a silly grin on his face and asked why he was so giddy. When he explained, she was just as thrilled as he was.

So Morneau’s wife and their 5-month-old daughter, Evelyn, came out to watch him play 3-1/2 innings in a B game against Pittsburgh on Tuesday morning. On a back field at the Twins’ Lee County Sports Complex, Morneau went 1-for-2 with a three-run double, eight months and one day after a second-base collision with John McDonald ended his season.

“We figured now is as good a time as any to see if the body is ready for this,” said Morneau. “All the signs and all the data and everything points to being ready for this.”

Working his way back day by day
Provided Morneau remains symptom-free, manager Ron Gardenhire plans to start him in an A game on Thursday against Toronto at Hammond Stadium. “I’m going see how he feels tomorrow, then slowly, day-by-day, work him into it,” Gardenhire said.

Morneau received a nice hand from about 200 spectators, most of whom had no idea Morneau would be playing. Besides the double, Morneau made two putouts at first base and slid into the plate without incident, since an off-line throw eliminated the need for contact with catcher Wyatt Toregas. Playing first base, Morneau wore sunglasses but did not use a helmet.

Simply being on the field, after so much time away, left Morneau thrilled and a little emotional. “I looked around,” Morneau said. “Usually I keep it pretty internal. But just to be standing out there puts a smile on your face. I think I was talking a little more than I normally do out there. I was wearing out Hughsie [second baseman Luke Hughes].”

Facing Pirates righthander Brad Lincoln in the first inning, Morneau grounded out to second. In the third, with righthander Bryan Morris on and the bases loaded, Morneau pulled a fastball hard down the right-field line for the double. Delmon Young, also making his spring debut after sitting out with turf toe, scored all the way from first base.

Gardenhire took out Morneau after he played defense in the top of the fourth. It was a hot day with bright sun, and Morneau said he felt like it was the eighth inning. Now, Morneau — who fashioned a Fu Manchu-like mustache from several days of facial stubble — says he is “cautiously optimistic” that his frustrating ordeal is over.

“When I see myself in the lineup on April 1 (Opening Day) and we’re running out there as a team, that’s when I’ll feel 100 percent confident that I’m ready and all the rest of it,” Morneau said. “I don’t want to get totally excited about three innings in one game.”

As recently as last Friday, Morneau said he still experienced fogginess once or twice a week after his workouts, requiring a nap. But this morning, Morneau said he hasn’t experienced any symptoms since last Tuesday, when he flew to Pittsburgh for a doctor’s appointment. Neither Morneau nor the Twins have identified his specialist, but it is likely someone affiliated with the nationally known sports concussion program at the University of Pittsburgh Medical Center.

Although held out of games, Morneau has not been limited otherwise. He took batting and fielding practice with everyone else, participated in drills and exercised in the weight room. “He’s been doing workouts off the field that exceed what a lot of players are doing,” general manager Bill Smith said.

Games were the last step. Concussion return-to-play protocol requires an athlete to show no symptoms during workouts for a defined period before he or she can resume game action.

“I had a good conversation with the doctor last night for about an hour,” Morneau said. “The doctor said I’m not at risk more than anyone else that’s out there. So that’s kind of what it came down to.” Morneau said the doctor also spoke with Smith, and they all agreed to let him try to play.

All along, the Twins avoided pushing Morneau to come back or set a timetable for his return. Morneau said they chose a B game to try and keep things low-key.

B games are additions to the main spring training schedule. Teams primarily arrange them to ensure all their pitchers get enough work. Often they are played on back fields, and admission is not charged.

Team monitoring Morneau closely
The Twins have monitored Morneau’s recovery closely, often limiting his contact with reporters to avoid stress, which can worsen post-concussion symptoms. Not surprising, the Twins would not confirm Morneau was playing until shortly before he took the field at 10 a.m. local time, on Smith’s orders. The lineup posted in the clubhouse Tuesday morning listed a minor-leaguer, Chris Parmalee, batting cleanup at first base, not Morneau.

“We just left the sheets so Justin could get his work done and not get swamped in here about playing,” Gardenhire said. “It was Double Naught Spy stuff. Parmalee played the part of acting first baseman.”

Somebody has been watching too many episodes of “The Beverly Hillbillies,” apparently. But the signs were there.

The first hint came at 8:15 a.m., when Morneau was seen taking batting practice on a side field without his batting helmet. Normally, Morneau uses a helmet to protect his head against foul balls banging off the top of the cage.

Then at about 9:15 a.m., Morneau, in a white-and-pinstriped game uniform, jogged out to stretch with the rest of the B squad players. A few minutes later, a club source who requested anonymity because he was not authorized to speak about Morneau confirmed to MinnPost that Morneau had been cleared to play.

Joe Mauer, Morneau’s friend, said he talked to Morneau on Monday night and knew he was considering this. Gardenhire also learned about it Monday night in a phone call from Smith. The rest of the team found out when Morneau pulled on his game whites.

“I was excited,” said righthander Kevin Slowey, who started the B game and tossed three scoreless innings. “It’s been a long road.

“It was neat that everyone was excited for him, especially the fans. I don’t know if you can read any more into it than he had a chance to get out there, but it was definitely neat to see.”

Last week, Morneau said his swing was so sound that he guessed he only needed two weeks’ worth of at-bats to be ready for Opening Day in Toronto. Now, he has that time.

“It’s one of those things where it’s going to take some time to get back into game shape and all the rest of it,” Morneau said. “But as far as the brain goes, hopefully we’re past all the symptoms and all the rest of that stuff. Hopefully, we’re where we need to be.”