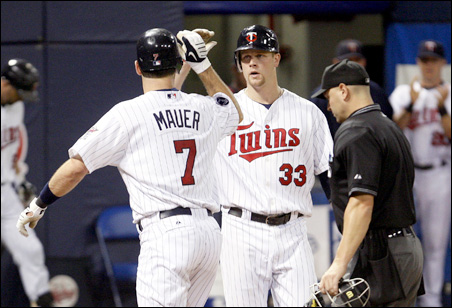 REUTERS/Eric Miller
Justin Morneau, out since last July, is making his spring training debut this morning at first base.

FORT MYERS, Fla. — Justin Morneau, who hasn’t played in a game for the Twins since suffering a concussion last July 7, has been medically cleared for full activity and will participate in a B game against the Pittsburgh Pirates this morning, a club source confirmed to MinnPost.

Morneau was not in the starting lineup posted in the clubhouse but joined the rest of his B game teammates on a back field to stretch, wearing a full white uniform for the first time. Morneau also took early batting practice this morning without a helmet, which he had been using all spring.

As recently as Sunday, general manager Bill Smith said there was no timetable for Morneau’s return. Morneau said late last week he was still having light symptoms once or twice a week. He needed to be symptom-free before returning to play, in accordance with concussion guidelines. Now that has happened.

Check back with us later to learn how Morneau did.