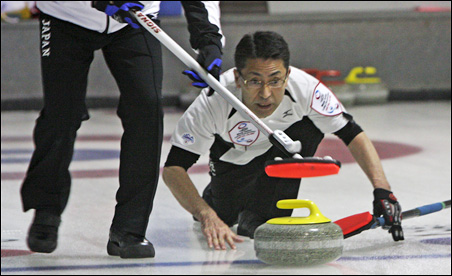 MinnPost photo by Peter Koeleman
Japan’s team skipper, Nobuyuki Kato, throws a rock at the house Tuesday during a match against England in the senior competition.

Russian is being spoken this week on Cathedral Hill in St. Paul, and not over chicken Kiev at Moscow on the Hill. Japanese, too. And Italian, German, Korean and a number of other languages.

The World Senior and Mixed Doubles Curling Championships run all week at the venerable St. Paul Curling Club, the first world championship hosted by the largest (1,200 members) and one of the oldest clubs in the United States.

It’s quite an undertaking. On Sunday, the 99-year-old structure was teeming with people — nearly 200 curlers from 28 countries, plus about 200 spectators who squeezed in for the first day of matches. And the kegs of beer usually stacked along the east wall had to be moved to a refrigerated trailer in the parking lot.

“We’ve never done anything on this scale,” said Mike O’Neil, the head of the club’s tournament organizing committee.

So why start now? Because some day, the club would like to host the men’s or women’s world championships at a modest-sized arena in the Twin Cities area.

According to Kent Beadle, a longtime St. Paul member and a U.S. Curling Association vice president, the World Curling Federation turned down a club bid for the 2012 men’s worlds because the 2011, 2009 and 2008 events had been awarded to North American cities (Regina, Moncton and Grand Forks, respectively), and the WCF likes to move its championships around to Europe and Asia, too. Basel, Switzerland, won the 2012 bid. So instead, the club went after world seniors and mixed doubles, a logical first step.

Twenty-one men’s teams and 11 women’s teams are competing in world seniors, and 24 in mixed doubles; Americans are entered in each discipline. The tournaments run through Saturday, when the gold and bronze medal matches are scheduled for 2 p.m.  Limited daily tickets, for $35, are available at the door or here.

Curling is so huge in Minnesota, and the St. Paul club so large — last year it added a satellite location at Biff Adams Arena in Frogtown for more than 200 people it had to turn away — that it’s surprising the club never pursued anything bigger than a national championship. O’Neil and Beadle said the neighborhood’s formerly blighted state discouraged previous club officials. The WCF requires arena venues for its men’s and women’s championships, but club sites are OK for the seniors, first held in 2002, and mixed doubles, which began in 2008.

“We felt the timing was really right to try to bid for something like this,” O’Neil said.

“I’m an optimist by nature, but at the end of this week when we have our post-mortem meeting, I hope everybody has a really positive attitude and we have a chance to do something like this again.”

This is the first World Seniors held in the United States since the inaugural event in Bismarck, N.D. The United States is the defending men’s champion, though that team, skipped by Paul Pustovar of Hibbing, did not qualify. But six St. Paul club members did — Margie Smith, Debbie Dexter, Rachel Orvik and Sally Barry in senior women, and Ken Olson and Tim Solin in senior men. Seniors must be at least 50 years old.

O’Neil said the club budgeted between $30,000 and $40,000 to put on the event. “It’s not something we went into thinking we were going to make a lot of money,” he said. The WCF is providing some financial help, with sponsors — many of them local businesses — also kicking in. Paisano’s, a pizza and hoagies place on Selby Avenue, is co-sponsoring Team Ireland, which seemed odd until O’Neil said the owner is of Irish heritage.

About 200 club members volunteered to work the event, O’Neil said, doing everything from keeping score to driving competitors around. The club also paid professional icemakers from Fargo, N.D. and Winnipeg to ensure conditions on the club’s eight “sheets,” or match surfaces, were championship caliber.

Bringing together so many diverse peoples and cultures can be a fiasco waiting to happen. Teams who needed a translator were supposed to request one in advance, O’Neil said, but Team Italy did not do so until several hours before the pre-tournament meeting last Saturday. A hasty search for one fell through, and O’Neil did not learn until the next day that WCF media relations officer Joanna Kelly speaks Italian, French and German.

Although competitors and their national federations pay for travel and hotel accommodations, the club is responsible for shuttling people from Minneapolis-St. Paul International Airport to three hotels, then back and forth to the club. They haven’t lost anyone yet, O’Neil said, though the other day some tournament officials got stuck in a hotel elevator for about 45 minutes. Most non-Americans ask where they can get a tasty hamburger, or a beer.

But curling has a universal appeal and camaraderie that transcends language. Competitors shake hands before and after matches and exchange little gifts. The gift bag from the Brits, for instance, contained three miniature bottles of Beefeater Gin.

After matches, players head upstairs to the club bar for adult beverages. (Tradition dictates that the winners, not the losers, buy the first round.)  Sunday, English-speaking women from New Zealand, Canada and Ireland sat at one table, while Swedes and Russians posed for photos with each other at another. It’s a fun atmosphere. And with a glass window overlooking the eight ice sheets, competitors can keep an eye on teams playing after them. There is even a window in the men’s room, over the sink, with a view of the three middle sheets.

Earlier, after a match between the U.S. and Japan senior men, the teams shared a table even though the Japanese knew little English. Olson said Solin, who had worked in Japan for 3M and knew some Japanese, offered to translate.

“They asked us, ‘What do you say at the beginning of every game?’ ” Olson said. “We said, ‘Good curling.’ And they told us how to say good curling [in Japanese].”