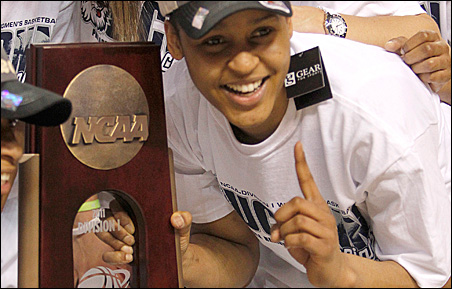 The great ones grab your attention. They command a room with their presence, command the field with their ability and force you to watch their every move, because they might do something you’ve never seen before.

Until Monday’s WNBA draft, the Minnesota Lynx never had one of these players. Now they do.

Maya Moore flew here on Tuesday with the Lynx’s other first-round choice, Amber Harris, and was so worn out from the draft-day whirlwind in Bristol, Conn., that she walked off the plane at Minneapolis-St. Paul International Airport and left Harris behind. It was the only misstep for Moore, the University of Connecticut star, on a memorable first day.

Moore and Harris entered a function room off the Target Center skyway to thunderous applause from Lynx and Timberwolves employees, giddy at the prospect that for once, a basketball team housed in this building might not stink. At least the room didn’t. When the Wolves introduced David Kahn here two years ago, there was a stench like a raccoon crawled into the air ducts and died. On Tuesday, the place smelled sweet. The Lynx can take that as a rare good sign.

It is a franchise with two winning seasons in 12 years, no division titles, no playoff appearances since 2004 and only two altogether. The Lynx should have been better last year after acquiring Lindsay Whalen and Rebekkah Brunson, but lengthy absences by the injured Seimone Augustus and Candice Wiggins contributed to another losing year.

Landing Moore is franchise’s biggest victory ever
The Lynx have been so bad for so long that winning this year’s WNBA draft lottery, which landed them Moore, counts as the biggest victory in franchise history.

The 6-foot Moore is the only three-time winner of the Wade Trophy as the best female college player in the country, someone so talented that Duke Coach Joanne McCallie called her “the greatest women’s college basketball player alive today.” She lost four games in four seasons at UConn, won two national championships and started throughout the Huskies’ record 90-game winning streak. Moore played center and power forward for UConn but will be a small forward with the Lynx, Coach Cheryl Reeve said.

She gives the Lynx a third dynamic player along with Augustus, a career 21.2 points-per-game scorer, and Whalen, an inventive playmaker. That’s one more than the Timberwolves, three more than Tubby Smith’s Gophers, and two more than the Wolves had most of the time Kevin Garnett was here.

The Lynx roster might represent the greatest collection of talent on one basketball team in the Twin Cities since the Minneapolis Lakers left town. If the Lynx can’t win with these players, everybody deserves to be fired, from top executive Roger Griffith down to the coaching staff.

“I’m hoping we have great chemistry,” Moore said. “We have the pieces. We have so much talent. I’m really excited to play with that much talent at once. It’s definitely going to be a challenge, but I’m used to being challenged by my former head coach [Geno Auriemma].”

The Lynx have always been a tough sell in a front-running town. Anticipating Moore’s arrival, four months ago, the Lynx and Wolves front offices began formulating a comprehensive marketing strategy.

“We told each area, ‘Bring a Maya plan,’ ” said Conrad Smith, the Lynx chief operating officer. “This is the moment. We weren’t going to sit and wait to see what happened. Let’s get after it. Who are we after? How do we get to them?”

It started with emails and phone calls to anyone who ever purchased a Lynx ticket and provided contact information. A skyway wall near the Timberwolves offices that once displayed a Sleep Number Bed advertisement with Garnett now trumpets, “Lynx select MAYA MOORE!” More TV and radio ad buys are coming, along with recorded phone pitches from Moore and the Wolves’ Kevin Love, Smith said. So are personal appearances. This morning, Moore and Harris are scheduled to host a Lynx fitness clinic for schoolchildren at the downtown Minneapolis YMCA.

The challenge will be attracting people to see a team with no winning tradition, at a time of year when everyone wants to be outside. Smith understands that a large chunk of sports fans won’t watch women play anything even if you offered them free tickets, a case of beer and a limo. The Lynx will never sell out Target Center, but the folks who livened Williams Arena when Whalen and Janel McCarville took the Gophers to the Final Four in 2004 haven’t left town. The Lynx need to give them a reason to show up. And Moore might be that reason.

But first Moore and Harris, a 6-5 forward/center, must adjust quickly to a league that’s more physical then they’re used to.

“They’ll play against bigger, faster, stronger [players] the first three weeks of training camp, especially the first week,” said Reeve, her voice raspy from two days of interviews. “They should get rocked physically. It should be challenging for them. If it’s not, we’ve got a problem.”

New challenges for college star
As a small forward, Moore will be guarding different types of players than she did at UConn. “Chasing people off screens, guarding people off the dribble with multiple facets to their game, that’s going to be a challenge for Maya initially,” Reeve said. “She likes these challenges. She’s extremely competitive and wants to be prepared.

“From Day 1, I’m not going to hold back from coaching her. A lot of times, you let a new person find their way in. With Maya, if you just tell her what you need her do, she’ll do it. To give her that information right off the bat is going to help her.”

Said Moore: “It’s going to be tougher. Things I may have been able to take advantage of at the college level will be a lot harder to get.

“I guess the experience of just being as competitive as possible will definitely help me, and help me contribute very early.”

She’ll have to. Whether her teammates like it or not, Moore is the new face of the franchise. That freshness is the Lynx’s best hope.