As usual, the Twins waited as long as possible to place an injured player on the disabled list, but when Delmon Young was scratched from last night’s scheduled return to the lineup and instead missed a sixth straight game with sore ribs, they finally put him on the shelf. 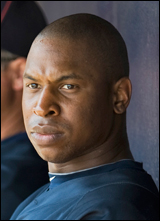 To replace Young on the roster the Twins called up Rene Tosoni from Triple-A, bypassing a slow-starting Ben Revere for a different left-handed-hitting Rochester outfielder.

Picked out of a Canadian junior college in the 36th round of the 2005 draft, Tosoni has shaken off significant injuries that stalled his development in both 2008 and 2010 to become a very solid all-around prospect without standing out in any one area. He doesn’t have big power, draw tons of walks or post huge batting averages, but he’s hit .272/.360/.451 with 22 homers, 69 total extra-base hits, and a 162/75 K/BB ratio in 193 games between Double-A and Triple-A.

Right now, Tosoni looks like a ‘tweener, because he lacks the range to be a center fielder and doesn’t project to have the bat to be an everyday asset in an outfield corner. Like most left-handed hitters, he thrives against right-handed pitchers and struggles against left-handed pitchers, so Tosoni could be an ideal platoon candidate if Ron Gardenhire and the Twins actually employed such strategies on a regular basis.

Michael Cuddyer, Jason Kubel, and Jim Thome are all free agents after the season, so this is an opportunity for Tosoni to make a good first impression well ahead of his expected timetable and put himself in position to replace someone in the lineup in 2012. Unfortunately that comes at the expense of Young joining Joe Mauer and Tsuyoshi Nishioka on the DL and the already struggling lineup becoming even weaker, but Tosoni is capable of holding his own right away.

And in an effort to provide the most thorough scouting report possible, here’s video of Tosoni’s wife “icing” him at their wedding this winter (don’t worry, it doesn’t mean what you think):

I’m not sure if that will help him hit MLB pitching, but he’s already leading the team in likability.