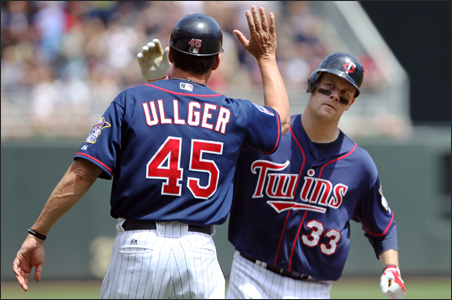 Until Danny Valencia was thrown out at the plate by left fielder Travis Snider Sunday in Toronto, a large segment of Twins fans did not realize — or forgot — that the Twins changed third base coaches in the off-season.

Liddle, the bench coach since joining Gardenhire’s staff in 2002, moved to third, while Ullger — the third base coach since 2006, and a staffer originally hired by Tom Kelly in 1995 — took over the bench post. Liddle makes his Target Field debut at his new assignment in Friday’s home opener against Oakland.

Other than the manager, no one takes more heat on a baseball team than the third base coach, especially when a runner gets cut down by a step or more trying to score. Ullger has taken his share of fan abuse, but that’s not why Gardenhire made the switch.

Ullger is Gardenhire’s sub
Ullger fills in as acting manager whenever Gardenhire is ejected or misses a game, and he hopes to manage his own team one day. That won’t happen in Minnesota as long as Gardenhire keeps winning division titles. To boost Ullger’s credentials, Gardenhire decided to make him the bench coach.

“He aspires to be a manager, and I want him in the dugout with me,” Gardenhire said. “To be in the dugout is the right thing, since he is the acting manager when I’m out. Get rid of that third-base stuff. He’s done that long enough. Steve likes to coach third base. Change it up a little bit.”

Ullger has been on the major-league staff so long that most people forget he managed for seven years in the Twins system after his playing career ended in 1987. Ullger’s teams compiled a 567-433 record, made the playoffs five times, and never had a losing season. Twice he was named the best managerial prospect in his league by Baseball America, in 1990 for Visalia in the Class A California League, and three years later for Portland in the Class AAA Pacific Coast League.

Bench coaches came into common use about 20 years ago, functioning as an assistant manager or adviser. Some teams hire a former manager, like Don Zimmer, who was Joe Torre’s bench coach with the Yankees for eight seasons. Other times it’s an up-and-comer trying to establish “bench cred,” like Ullger or Joey Cora of the White Sox. Liddle assembled much of the Twins’ opponent information and often relayed signs to Ullger or the catcher.

“Coaching third base is a job in itself,” Ullger said. “This way I can be a little more involved in everything that’s going on — the strategy, certain decisions you have about certain players.”

Now, there’s another component to this Gardenhire won’t talk about.

Last year the Twins missed too many signs for Gardenhire’s taste, with Denard Span one of the leading offenders. Ullger never could fix that. Liddle is an imposing 6-foot-4 former catcher with a reputation as a no-nonsense taskmaster. Anyone who misses one of Liddle’s signs better find someplace to hide. Preferably soundproof.

Asked what will happen if someone misses one of his signs, Liddle said, “I’m probably going to hear it from the manager. He’ll probably say I’m not spending enough time with the player who’s missing the signs.” Then Liddle, a Tennessean who knows how to pause for effect, paused.

“I’m trying to figure out how to say [stuff] runs downhill,” he said with a laugh, knowing full well he just did.

Gardenhire, meanwhile, said Ullger did a “fantastic” job coaching third, and the assignment switch did not reflect dissatisfaction with him.

Team’s lack of speed complicates coach’s life
“I told you guys a thousand times: One of the biggest things we had not working for us was speed. We didn’t run very well,” Gardenhire said. “I think if you look at it, you saw what he had to work with out there, and it wasn’t very good. People yelled and screamed, [and] he ended up trying to force issues because of that, trying to score runs because of lack of speed.

“That’s one thing we’re put a lot of emphasis on in spring training … better turns, better running, the whole package. But Scotty is a very good third base coach. He was a very good one all the way up. That’s just the way it is.”

Minor-league staffs are usually so small that the manager often coaches third base. Liddle guessed he coached more than 800 games at third during eight years in the Twins system, from 1989 to 1994 and in 1997 and 1998, all in Class A and rookie ball.

“You have to make split-second decisions based on a lot of information,” he said. “I can’t be a high-risk guy, because I’ve got to play the percentages. Guys perform at such a high level defensively that you can’t anticipate a guy making a mistake.” Liddle said he’s more likely to hold a runner if Joe Mauer or Justin Morneau are up next, especially with two out.

Already, Liddle has heard it from fans. It takes a lot to be booed in a spring training game, but Liddle took the brunt of dissatisfaction in a March 8 game at Hammond Stadium in Fort Myers.

The Twins were losing 5-2 to Pittsburgh in the bottom of the ninth when Liddle stopped Justin Huber, a minor-league free agent, at third on a double by another minor-leaguer, Danny Rams. Most fans failed to notice Huber’s slow reaction from first base.

“He said to me, `I wasn’t sure the guy was going to catch the ball, so I waited,’ ” Liddle said. “Down by three, one out, bottom of the ninth, I’m not going to get a guy thrown out there.”

Said Gardenhire: “If you have any clue at all, you’re down three runs and you’ve got Huber running, and he’s playing Beethoven as he’s running. We can’t get him thrown out there. If a base runner makes a mistake on the bases, and you as a third base coach try to still force the issue, that’s when you get screwed.

“Steve did a great job, but people yelled. People have a right to come to the ballpark and yell at the third base coach, but most of the time it happens before you get to third base.”

Liddle said he can handle the criticism. “You can’t let the crowd get to you when a guy gets thrown out on a bang-bang play,” he said. “You can’t let that affect your decision-making process. I have no problem making split-second decisions.”

Then Liddle chuckled. “My biggest concern,” he said, “is getting hit by a ball.”