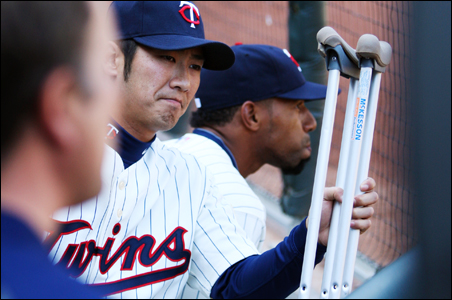 REUTERS/Eric Miller
It was a disappointing home opener for injured Twin Tsuyoshi Nishioka.

A bunch of Twin notes as Kansas City comes to town:

• Tsuyoshi Nishioka got relatively positive news on his fractured fibula, as doctors determined he won’t need surgery and could potentially return in 4 to 6 weeks. It was sad to see Nishioka on the field supporting himself with crutches during the home opener ceremonies, particularly since his parents flew in from Japan, but the Target Field crowd gave him a nice welcome, and even a six-week recovery timetable could mean returning to the lineup by the end of May.

One interesting subplot with Nishioka’s leg injury is whether he was fully prepared to deal with runners like Nick Swisher sliding hard into second base (or the general vicinity) in an effort to break up double plays. Base runners in Japan typically don’t engage in takeout slides and after watching Nishioka during early spring workouts, bench coach Scott Ullger noted that “mak[ing] sure he clears the bag at second base so he doesn’t get killed” was an issue.

• Luke Hughes came up from Triple-A to replace Nishioka and started at second base Friday and Saturday, but Ron Gardenhire turned to Michael Cuddyer there Sunday. Cuddyer also made one start at second base last season but, before that, hadn’t started there since 2005. Sacrificing defense to get an extra bat in the lineup works in theory, but Cuddyer’s defense at second base is likely beyond bad at this point, and his bat isn’t sacrifice-worthy versus righties.

Cuddyer hit .261/.319/.423 versus right-handed pitchers during the past three years, including .265/.307/.393 off them last season. That isn’t enough production to warrant regular playing time against righties, let alone regular playing time at the expense of weakening an already shaky defense. It also doesn’t say much for the Twins’ faith in Hughes if they don’t think he’s a superior option at second base than an outfielder with a .261/.319/.423 line versus righties.

More than anything, though, it speaks to Gardenhire’s inability to see that Cuddyer is no longer a quality regular against right-handers. He told reporters prior to Sunday’s game that using Cuddyer over Hughes at second base was a way for him to get Jason Kubel and Jim Thome into the lineup together versus a righty, but Gardenhire should have been willing to make that happen by benching Cuddyer versus righties anyway. Loyalty is clouding the manager’s vision.

• Regardless of who sees most of the action at second base, the middle infield defense will be ugly. Hughes’ glove has never had strong reviews, Cuddyer last played second base regularly when Cristian Guzman was his double-play partner, and Alexi Casilla has predictably been shaky so far at shortstop. Combined with the standard lack of range from Delmon Young and Kubel (or Cuddyer) in the outfield, the defense is now poor in at least four of eight spots.

• For those of us clamoring for middle infielders past: J.J. Hardy might miss six weeks with an oblique strain and Nick Punto is on the disabled list following hernia surgery. Orlando Hudson is healthy and oddly batting third in the Padres’ lineup.

• I’m pleasantly surprised that Gardenhire chose to move everyone up one spot in the batting order with Nishioka out, rather than insert a weak hitter at No. 2, like he’s done so many times before. Denard Span, Joe Mauer, and Justin Morneau being three straight lefty bats atop the lineup isn’t ideal, but I’ve long clamored for the team’s two best, most patient on-base threats to bat directly in front of the team’s best power hitter, without anyone “scrappy” in between.

Hopefully they get an extended chance to make it work, at least versus righties. Against lefties, it would probably make sense to break up the lefty bats with Young or perhaps even Cuddyer at No. 3. Against lefties, Span and Mauer remain good OBP threats, but Morneau isn’t quite as devastating, and both Young and Cuddyer had a higher OPS than he does off lefties during the past three years. Either way, anything that keeps a weak bat from the No. 2 spot is good.

• Joe Nathan appears to be gradually increasing his velocity and improving his command as he comes back from Tommy John elbow surgery. He’s still not throwing anywhere near as hard as he did prior to going under the knife, but Nathan went from 88 to-91 miles per hour in his first outing to 90 to 92 miles per hour Saturday, which is a bigger step than it probably looks like. He can have success as a closer throwing 92 mph, but 88 to 91 makes things awfully tough.

And as if you didn’t already have enough reasons to root for Nathan’s return to dominance, he apparently scooped up some dirt from the mound after the final game at the Metrodome, kept it for 18 months and then mixed the dirt into the Target Field mound prior to Friday’s opener. FSN showed video of it, and Kelsie Smith of the St. Paul Pioneer Press wrote a nice article about the whole thing, all of which makes me like Nathan even more than before.

• Kevin Slowey joined Nishioka on the disabled list with a sore shoulder, putting his transition to the bullpen on hold after just three relief outings. Based on his raw stuff and track record, Slowey has a shot to be a setup-caliber reliever, but staying healthy is now the biggest issue following wrist surgery in 2009, a triceps injury last season and his current shoulder problems. Gardenhire opined that he’s “going to have to learn … to warm up a little better” as a reliever.

In the meantime, Alex Burnett got the call from Triple-A to replace Slowey, despite being behind fellow right-handers Jim Hoey, Kyle Waldrop and Carlos Gutierrez in the bullpen competition this spring. Waldrop and Gutierrez aren’t on the 40-man roster yet, so the choice likely came down to Burnett or Hoey. Burnett struggled in the second half last season in both Minnesota and Rochester, but still projects as a solid reliever long term. He may not be ready yet, though.