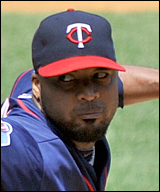 More Twins notes as the team heads out on his second road trip:

• Prior to Wednesday’s game Ron Gardenhire reiterated something he’s been saying for a while now, which is that the Twins want Francisco Liriano to “pitch to contact,” rather than focusing on strikeouts. That can be a positive thing, as Liriano would definitely benefit by improving his control and going deeper in games, but it seems like an odd stance to take following a season in which he had 201 strikeouts and a team-best 3.62 ERA. Here’s what Gardenhire said:

We’ve told him forever that he’s a strikeout pitcher. We understand that he can strike people out, but if he really wants to become a pitcher, pitch to contact. Use that two-seamer and use that slider down and in every once in a while, and that changeup, but pitch to contact early. That’ll get him deep into games.

Because his stuff is so good. There’s times when you need to go for the strikeout. That’s when you save your Mr. Nasty, as they say. You throw the nasty pitches then. But those other times you need to pitch to contact to get you deeper into games. When you want that big strikeout, maybe with a man on second, and you’ve got an open base, take your shot with your stuff.

Liriano followed those orders against the Royals, throwing 68 percent strikes and walking just one batter, admitting afterward: “I was throwing more fastballs than I used to. I just wanted them to put the ball in play, not try to strike out a lot of people.” In doing so, he also showed the downside of asking a strikeout pitcher to adopt the “pitch to contact” approach. He cruised through the first three innings, but then this nightmare unraveled in the fourth inning:

Six runs on eight hits and at most three of them were well-struck. Even the double came on a ground ball. And he needed a strikeout just to escape all the bloopers falling in and grounders getting through. Last year, no defense in the league turned a lower percentage of balls in play into outs than the Twins did behind Liriano, and Wednesday was the same story, as a defense with Michael Cuddyer at second base and the usual lack of outfield range did him no favors.

To be clear, Liriano has not pitched well through three starts. However, he was very good last year largely because of his ability to rack up strikeouts, and I’m just not sure about the wisdom of trying to force the guy with the best raw stuff on the staff into the Twins’ preferred pitching mold, particularly when the defense behind him is ill-suited to actually make that approach look good. Why should Liriano trust a subpar defense more than his ability to get strikeouts?

Obviously the Twins have shown that pitching to contact can be successful, but most pitchers adopt that approach because they aren’t capable of missing bats like Liriano, and MLB hit .325 with a .508 slugging percentage when not striking out in 2010. Strikeouts are good, relying on the defense can often be bad, and forcing a uniquely square peg into a round hole brings back bad memories of the Twins trying to change David Ortiz into something other than a slugger.

• Alex Wimmers was the Twins’ first-round pick last June after winning back-to-back Big Ten pitcher of the year awards at Ohio State and ranked No. 5 on my annual list of the Twins’ top prospects. After signing, Wimmers debuted with a 0.57 ERA and 23-to-5 strikeout-to-walk in 16 innings at high Single-A, but his first start back at Fort Myers this year couldn’t have gone any worse, as he walked the first six batters before being yanked with no outs in the first inning.

Wimmers was a strike-throwing machine in college and his pro debut, but clearly this goes well beyond simple control issues. He threw just four of 28 pitches for strikes, uncorked three wild pitches in addition to the six walks, and was immediately placed on the minor-league disabled list with “flu-like symptoms” after the disastrous start. Wimmers isn’t actually sick, but that’s a way for the Twins to shut him down without the presence of an injury.

He’s been pulled from Fort Myers’ rotation and sent to extended spring training to work on his mechanics, as the Twins don’t want to let things snowball after watching what happened to 2008 first-round pick Shooter Hunt when his control suddenly abandoned him following a good pro debut. Hunt has 145 walks in 104 innings since 2009, falling off the prospect map. There’s no reason to assume Wimmers is destined for the same fate, but it’s an awfully scary red flag.

• Now that Matt Capps has been freed from the misguidedly rigid usage patterns of the closer role, Gardenhire is using him far more often. Capps threw 27 innings in 60 games on the Twins’ roster last season, which is a 73-inning pace. So far this season, he’s logged 6.2 innings in 11 games, which is a 98-inning pace. Not only is Capps working the eighth inning in front of Joe Nathan, he’s pitched in the seventh inning twice after doing so zero times from 2008 to 2010.

He’s unlikely to stay on a 98-inning pace, which would be a 30 percent increase from last year, but given the middle relief question marks, having Capps for, say, 20 percent more action than he’d get as a closer can make a big impact. There’s risk of breaking down physically with that much work, but Capps was very durable prior to becoming a closer and as an impending free agent likely to seek big money as a closer, the Twins have less reason to worry beyond 2011.

• Rather than trade Kevin Slowey during spring training, the Twins shifted him to the bullpen and now his landing on the disabled list with a shoulder injury has put any trade talk on hold, but Jon Paul Morosi of FOXSports.com speculates that the Twins could renew their efforts to deal Slowey once he’s healthy and with top prospect Kyle Gibson close to being MLB-ready, it would make plenty of sense.

Last month, most reports had the Twins shopping Slowey for bullpen help, but Morosi correctly notes that the middle infield is now a much bigger area of concern with Tsuyoshi Nishioka out with a fractured fibula and Alexi Casilla predictably struggling on both sides of the ball. Morosi mentions the Red Sox as a possible suitor, and they have shortstop depth to spare with Marco Scutaro backed up by Jed Lowrie and slick-fielding prospect Jose Iglesias at Triple-A.

• Gardenhire talked of giving Luke Hughes some action at shortstop, which is a bad idea, because he last played shortstop at Single-A in 2006 and doesn’t even get strong reviews for his glove at second base. Plus, in what scenario might that make sense? Hughes isn’t going to be the shortstop if Casilla or Matt Tolbert are in the lineup. He may get the nod there if Cuddyer is at second base, but then the game would be canceled when the pitcher refuses to take the field.

• Trevor Plouffe is off to a great start at Triple-A, hitting .348 with three homers in six games, but before anyone gets too excited remember that he played his way out of the middle infield mix during spring training by performing horribly and came into the season with a career line of .255/.306/.417 in 1,200 plate appearances at Triple-A. Plouffe hitting well is nice to see, but a good week in his fourth go-around at Rochester shouldn’t change anyone’s view of his future.

• Parker Hageman at Over the Baggy passes along this shot of the new right field scoreboard at Target Field displaying Delmon Young‘s “favorite book.” This whole time I had him pegged as more of a Tender Is The Night kind of guy.